Two steps down, one step up – that has been the playbook for risk-averse markets. What happens when traders have little time to act ahead of the weekend and the last word belongs to a downbeat figure? It is easy to imagine how markets tumble and the safe-haven dollar gets a final boost.

Markit's preliminary and forward-looking Purchasing Managers' Indexes for July may provide that spark. The economic calendar is pointing to stable reads in July – the Manufacturing PMI to tick down from 62.1 to 62 and the Services PMI from 64.6 to 64.8. These reads seem out of line with several developments, creating an opening for a downside surprise.

Why would these figures fall short?

First, Markit's Services PMI badly disappointed in June, when economists projected it to remain at a sky-high level of 70 against 64.8 in the original read and 64.6 in the final one. Perhaps there is room for more falls.

Secondly, the survey was held during July, when investors began becoming nervous about higher inflation. The headline Consumer Price Index shot to 5.4% yearly and Core CPI advanced to 4.5% in June. That mid-July publication weighed on sentiment.

Third, covid cases have begun rising not only in the UK, Spain, and Indonesia – but also in the US, as the highly transmissible Delta variant makes its way through America. That could depress the recovery even if state governors refrain from severe restrictions. Hospitalizations and deaths are up as well. 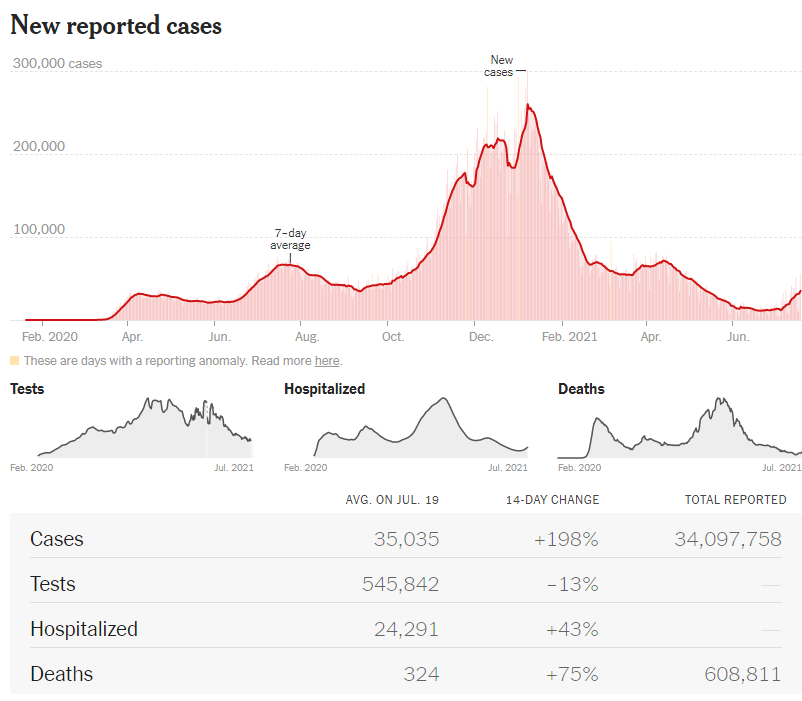 The fourth reason to expect a downfall is to look at consumer sentiment for the current month. The University of Michigan's initial read for July dropped to 80.8 against 85.5 in June, with shoppers raising their inflation expectations. How different are consumers from businesses?

The world's reserve currency has been in high demand as worries about Delta and the global recovery took over markets. The greenback also detached itself from the US Treasury yields – advancing even as returns on Uncle Sam's debt tumbled.

However, trading is never a one-way street, with occasional profit-taking on the dollar or dip-buying on other currencies. Any such counter-move could be cut short if Markit's PMIs indeed fall short of estimates.

The timing of the publication is also critical – Friday at 13:45 GMT, without any other release scheduled for later. Ahead of the London fix and the end of the week, it more likely than not that investors would take risks off the table. That is dollar-positive.

Another scenario is that figures come out mixed – manufacturing beats and services miss, or the other way around. In this case, the road risk-averse mood, the lack of convincing good news and the timing could still result in a flight to safety.

The least probable outcome is that both measures beat expectations. That could result in the opposite outcome of an upswing in markets and a weaker dollar. However, apart from having low chances, such a counter-trend move is unlikely to last.

Markit's forward-looking PMIs carry high expectations, which could result in a bitter disappointment due to various reasons. The safe-haven dollar is set to gain ground, also due to the timing, just before the weekend.