Historically, how impactful has the US jobs report been on gold’s valuation? In this article, we present results from a study in which we analyzed the XAUUSD pair's reaction to the previous 24 NFP prints*.

We present our findings as the US Bureau of Labor Statistics (BLS) gets ready to release the July jobs report on Friday, August 5. Expectations are for a 250,000 rise in Nonfarm Payrolls following the 372,000 increase in June. 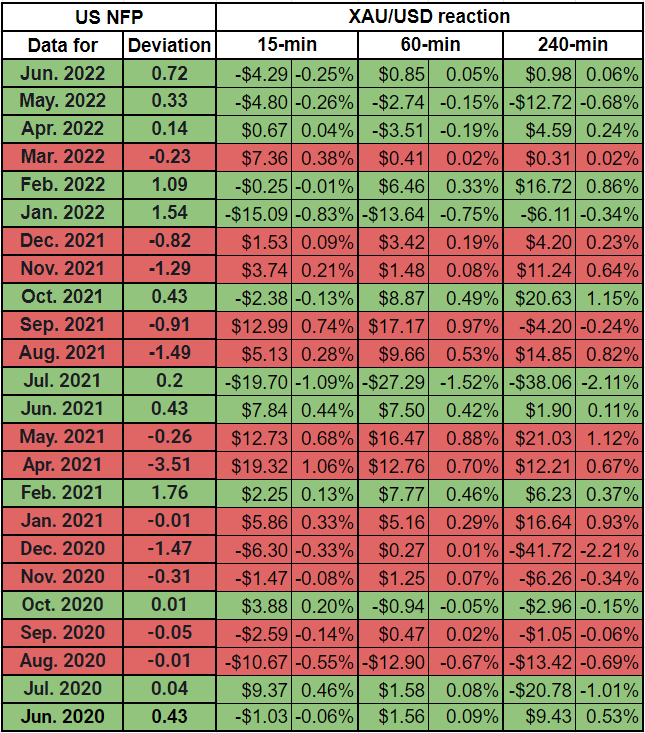 There were 12 negative and 12 positive NFP surprises in the previous 24 releases, excluding data for March 2021. On average, the deviation was -0.86 on disappointing prints and 0.59 on strong figures. 15 minutes after the release, gold moved up by $3.97 on average if the NFP reading fell short of market consensus. On the flip side, gold declined by $1.96 on average on positive surprises. This finding suggests that investors’ immediate reaction is likely to be more significant to a disappointing print.

Several factors could be coming into play to weaken gold’s correlation with NFP surprises. A few hours after the NFP release on Friday, investors could look to book their profits toward the London fix, causing gold to reverse its direction after the initial reaction. Additionally, FOMC policymakers made it clear that they will remain focused on taming inflation and that they are not yet concerned about the labour market, possibly causing the market reaction to the headline NFP to remain short-lived.

It's worth noting, however, that the Employment Index of the ISM Manufacturing and Services PMI reports both stayed below 50 in July, pointing to a loss of momentum in the labor market growth. Additionally, weekly Initial Jobless Claims have been rising steadily since early June. Hence, a large surprise in the headline NFP figure could trigger a bigger-than-usual reaction as it could have a significant impact on the market pricing of the Fed's rate outlook.