New restrictions on businesses in several American states including the most populous California, are threatening to reverse the progress in unemployment that has been made in the past eight months.

The rising numbers of COVID-19 diagnoses across the country, especially in the mid-West which largely missed earlier outbreaks, and the resulting voluntary restrictions on movement combined with some restaurant, bar and gym closures could bring about a new wave of layoffs.

Initial Jobless Claims are forecast to be essentially unchanged at 707,000 in the week of November 13 following 709,000 previous. Continuing Claims are expected to drop to 6.47 million in the November 6 week from 6.76 million. Both predictions would be the lowest of the pandemic era.

Although the burgeoning closures across the country are expected to cause a new round of layoffs the outstanding question is how much employment is left to burn in the restaurant, hospitality and travel sectors?

A little more than half the 22.16 million Nonfarm Payroll losses of March and April have been made good, 12.07 million people have been rehired or otherwise returned to work. The unemployment rate has fallen from a high of 14.7% in April to 6.9% in October and it dropped 1% from September.

The majority of businesses in states that are reimposing closures are unaffected by the new orders. Warnings from governments that people restrict their travel, stay indoors whenever possible and not gather for Thanksgiving next week, should have far less economic impact than the wholesale business closures mandated in the spring.

The point for claims is that no one know for certain.

Claims are the most timely of all economic statistics. They are issued weekly and at a one week delay.

If there is trouble brewing in the labor market it will show up here first.

Over the past eight months claims have fallen from that 6.687 million as much of the nation locked down, to 0.709 million in the latest week, a 90% reduction.

The improvement is deceptive for even at that level more people filed for unemployment benefits last week than had ever filed at one time in the past.

The number of hospitalizations in the nation has passed the highest point in the spring but it remains well below the percentage generated in that first wave. Fatalities are also much lower though the reported cases now are far higher. 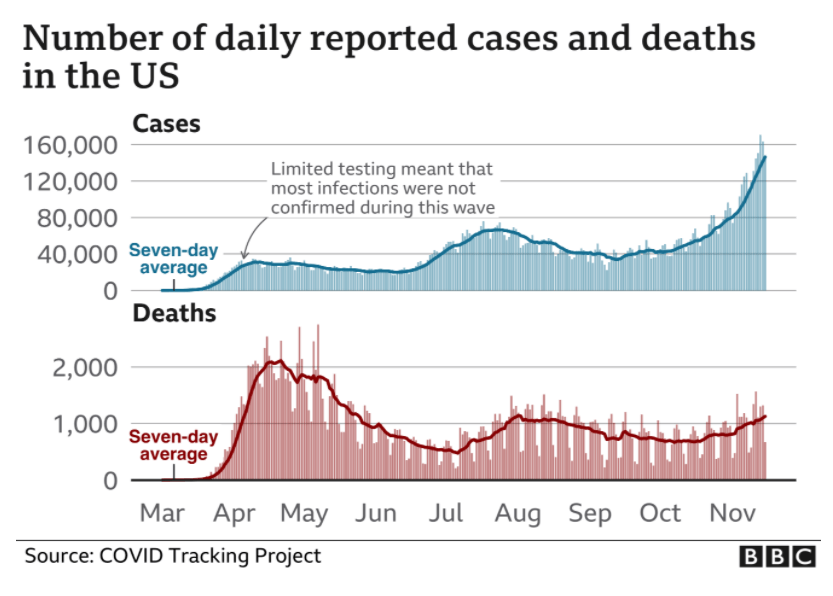 Even with the COVID-19 vaccines on the horizon, there is time for the current recovery to grind to a halt if the closures become extensive or last long enough to again cripple consumer spending.

Up to this point no US governor has ordered business operations restricted to essential services. Most measures involve rolling back reopenings, limiting social gatherings, advice against travel, and curfews for bars and restaurants.

Chicago has issued a stay-at-home advisory and the governors of California, Oregon, Washington State, Wisconsin and Nevada have advised people not to travel or requested they stay at home.

Markets have been focused on the future with US equities reaching new records on Monday. The yield on the 10-year bond reached its highest since August at 0.972% on November 10.

Currency markets have not expressed an opinion on this wave of the pandemic. The dollar has been largely contained in its ranges of the past four months against the euro while the yen and the Canadian dollar have continued their slow gains.

The situation however, is fragile. If claims unexpectedly rise will the safety-trade to the dollar resume? For the moment it seems unlikely as the surging case load in Europe, several weeks ahead of the states, Japan and elsewhere has had no impact and the increase in the US was predictable and inevitable. Yet the US is the home of the dollar as well as the largest economy.

The world and the US could again be in for several very unpleasant months, or not. No one really knows.

In the US the bad news will surface in unemployment claims first.