The US dollar strengthened against other currencies after the latest US retail sales numbers. According to the Census Bureau, the overall retail sales in the US declined by 1.3% in May as the country continued to recover and as the labor market tightened. The sales rose by 28.5% on a year-on-year basis. The core retail sales, on the other hand, dropped by 0.7% on a MoM basis. Further data showed that the producer price index (PPI) rose by 6.6% in May, which is a sign that inflation is rising. These numbers came a few hours ahead of the country’s industrial and manufacturing production data and the Fed interest rate decision that will come out on Wednesday.

The British pound declined sharply on Tuesday after the latest UK jobs numbers. According to the Office of National Statistics (ONS), the country’s unemployment rate declined from 4.8% to 4.7% in April. In the same period, wages continued to increase as companies continued to struggle to find workers. With bonuses, wages increased by 5.6% while without wages, they rose by 5.6%. These numbers show that the UK economy is doing relatively well, helped by the strong government support and low interest rates. The ONS will publish the latest UK inflation data tomorrow.

Cryptocurrency prices held steady as investors continued to react to the positive statement by Elon Musk and Paul Tudor Jones.  Bitcoin held steady at $39,656 while Ether rose to $2,565. BTC outperformed Ether because recent data showed that outflows from Bitcoin funds eased in May. Crypto inventors are now focusing on the statement by the Federal Reserve that will come out tomorrow. A hawkish Federal Reserve will be bearish for cryptocurrencies and vice versa.

The three-hour chart shows that the BTCUSD pair was little changed today. It is slightly above the 23.6% Fibonacci retracement level and slightly above the 25-day and 15-day moving averages. The pair has also faced significant resistance at the 40,000 level. Also, it has formed an inverse head and shoulders pattern. Therefore, the pair will likely keep rising so long as it manages to move above 41,000. The alternative scenario is where the pair struggles to move above this resistance and retreats. 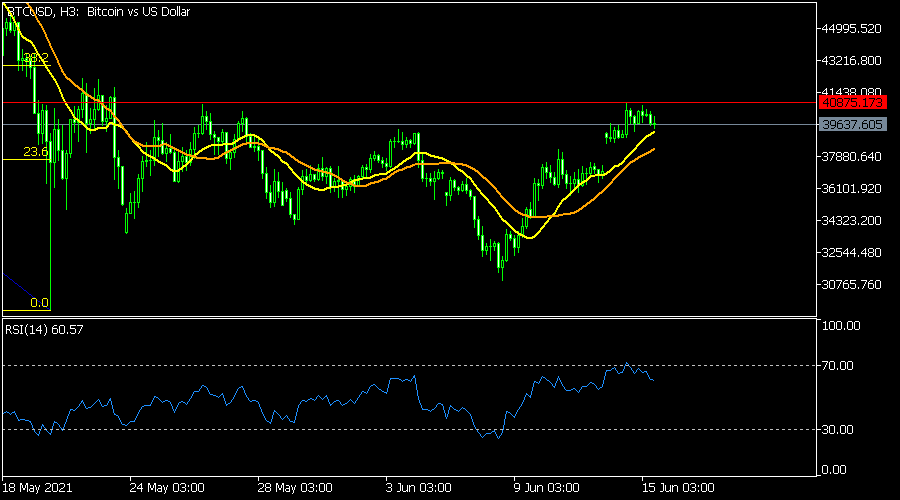