American job creation is expected to diminish in the second quarter despite a record number of unfilled positions, even as market concerns have deserted employment for inflation.

Private payrolls from Automatic Data Processing (ADP), the world’s largest paycheck service provider, are forecast to rise to 300,000 in May following 247,000 new hires in April. The ADP figure will be released on Thursday, one day later than usual due to Monday’s Memorial Day holiday in the US.

Coming as it does right before Washington’s Employment Situation Report, commonly called Nonfarm Payrolls, or just payrolls for its central statistics, the ADP report has long been looked to for clues to the national job numbers even though the monthly directional correlation is relatively weak. In the last year, the ADP and NFP have moved in tandem seven times and in opposition five times. For May ADP is forecast to rise and NFP is expected to fall.

The most salient fact of the US job market is the historic number of unfilled positions, a surplus of work, and scarcity of employees that has lasted for more than a year.

The Job Openings and Labor Turnover Survey (JOLTS), from the Bureau of Labor Statistics (BLS), has been above the prior all-time record of 7.574 million in November 2018 for 13 months. Since October, US employers have been looking for an average of 11.245 million workers each month. For the last year, the economy has averaged 42% more openings than at any previous time in its history. 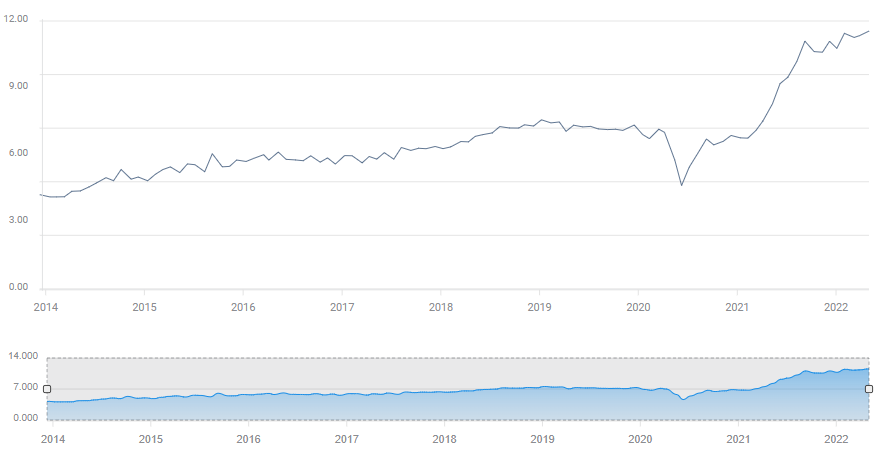 The difficulty in finding workers has been cited by purchasing managers as the main factor behind the decline in the employment indexes. The manufacturing index has fallen from 54.5 in January to 50.9 in April. While the services index has dropped from 57.0 in November to 49.5 in April, the second month of contraction in the last six.

Lack of opportunity is not what ails the American economy.

Inflation and the economic outlook

The explosion in US inflation has become the dominating condition of the US economy and the chief rationale of Federal Reserve policy. After ignoring the burgeoning price increases for nearly a year, the Fed reversed course and is expected to hike the fed funds rate 300 basis points or more this year. 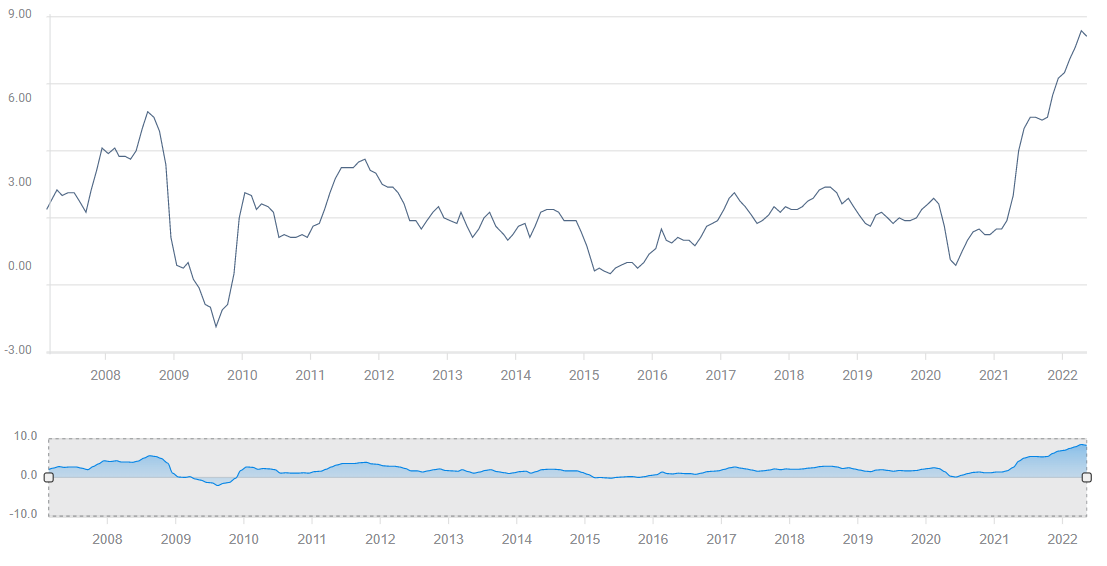 The US contracted at a 1.5% annualized rate in the first quarter. Markets will not know if the economy is in a technical recession until the end of July when second quarter GDP is reported. The data will come just after the Fed enacts its third 0.5% rate increase in a row on July 27.

One reason for the sudden Fed alacrity is that a recession could halt its rate program. How will the governors justify rate increases in a contracting economy? It is not a question Fed Chair Jerome Powell has addressed.

The key to US growth is consumer spending, the well-known 70% base of economic activity. Though Retail Sales and Personal Spending, the two chief measures of consumption, have remained relatively strong, they are uncorrected for price increases. Real personal spending, adjusted for inflation, from the Bureau of Labor Statistics (BLS) tells a very different story. It has been flat for the past four months.

Consumers have maintained their spending even as purchasing power has been declining for more than a year, by drawing on their financial resources. The US saving rate fell to 4.4% in April, the lowest since 2008, according to a Commerce Department report on Tuesday.

How long will American families mortgage their future to maintain their immediate spending is unknown. An assumption with increasing probability is that after losing to inflation for more than a year, and with the cost of necessities increasing much faster than overall inflation, American families are nearing their breaking point.

The decision to economize will not be forced by unemployment but by unchecked inflation.

Unemployment in the US is 3.6%, just one-tenth of a point from its all-time record. The problem for employers and the economy is not the unemployment rate but the labor participation rate. People have not returned to the standard labor market in anything like the numbers needed to fill the vast number of outstanding jobs.

The prospective slowdown in ADP and perhaps NFP in May will be seen by traders as a product of labor scarcity rather than a weakening economy. Market reaction will be limited or nonexistent to the ADP numbers, partially due  to their poor correlation to NFP and partially to the diminution of labor concerns, supplanted by inflation.