This week has been one of the strongest this year for the mighty dollar against G10 currency pairs in particular. The month of September is looking to close out the first monthly gain for the ‘buck’ in seven-months, backed by investors weighing up the prospects for U.S tax cuts and the possibility of another Fed hike before year-end.

Trump’s proposed tax plan, currently lacks detail, leaving capital markets somewhat in the dark on what areas would be prioritized by the administration. It’s this lack of context that seems to have persuaded a number of investors to consider putting Trumps ‘reflation’ trade on hold.

Nevertheless, with fed fund futures odds of further tightening stateside this year hovering atop of +70%, continues to provide some underlying support for equities and sovereign yields. Investors prefer to shy away from owning gold, which remains on track to close out September as its worst month this year.

Data on tap today, stateside; the U.S Commerce Department reports personal income and spending data for August (08:30 am EDT). Investors are likely to see some distortions related to Hurricanes Harvey and Irma, while north of the border, Canada releases its GDP numbers.

1. Stocks in the black

A weaker yen (¥112.48) has managed to underpin Japanese equities in September. Overnight, the Nikkei share average ended almost flat, down -0.03%, but managed to post its biggest monthly gain this year as investors rebuild positions they were scaled back on geopolitical concerns. The broader Topix was down -0.08%, but ended the month up +3.5%.

In Hong Kong, stocks ended higher on Friday, but the benchmark index has closed out September with its first monthly loss in 2017, an indication that the market’s upward momentum may be slowing amid worries over U.S monetary tightening and a China economic slowdown. The Hang Seng index rose +0.5%, but posted a -1.5% loss on the month and reduce 2017 gains to +25%. The China Enterprises Index gained +0.3%. For the month, it was up +0.2%, and for the quarter, the gauge gained +8.6%.

In China, stocks were higher, supported by hopes of further reforms to the mainland’s state-owned enterprises. The blue-chip CSI300 index rose +0.4%, while the Shanghai Composite Index gained +0.3%.

In Europe, stocks remain in the black; the FTSE 100 Index has jumped +0.5% to the highest in almost two-weeks, while the DAX Index has gained +0.2%, hitting the highest in three-months with its fifth consecutive advance. Spanish stocks are underperforming leading into the weekend with expected (illegal) referendum vote in Catalonia. 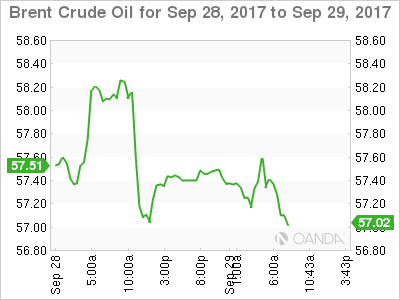 2. Oil mixed but set for weekly gain, gold has a losing month

Ahead of the U.S open, oil prices are mixed, but both Brent and U.S crude are set to record another weekly gain as investors bet that efforts to cut a global glut are working.

Brent crude oil is up +1c to +$57.42 a barrel, heading for a fifth weekly climb and a nearly a +10% gain on the month, while U.S crude (WTI) is down -8c at $51.48 a barrel at 0641 GMT, after earlier rising slightly. Still, the contract is heading for a fourth consecutively weekly gain and is on track for a 9 percent advance this month.

Support has been found from OPEC and non-OPEC producers have indicated they will stick with output cuts to limit supply. The crude ‘bulls’ are also getting support from Turkey’s threats to cut off a pipeline from the Kurdish region of Iraq after a referendum where Kurds voted overwhelmingly in favour of independence.

Note: The Kurdish region exports about +500k bpd through a pipeline that runs through Turkey to the Mediterranean Sea.

Gold is trading little changed amid pressure from a stronger U.S dollar. The yellow metal is heading for its biggest monthly fall this year amid rising prospects of a U.S rate hike in December. Spot gold is unchanged at +$1,286.96 per ounce and is on track to register a -2.5%this month. 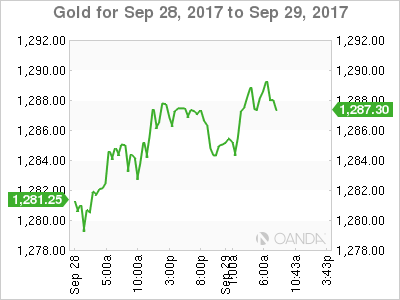 3. Yields end the week on a high

The prospect of higher U.S debt levels and expectations for another Fed hike has sent 10-year U.S Treasury yields to their highest since mid-July, with the 2-10 year yield curve steepening to its highest in a month.

This week’s selloff saw yields jump +19 bps, the most since Trump’s U.S election victory last November. Overnight, the yield on U.S 10-year notes has fallen less than -1 bps to +2.31%.

Comments this week from Fed Chair Janet Yellen that the U.S central bank needs “to continue with gradual rate hikes” have cemented expectations for policy tightening by year-end.

Note: U.S two-year notes are the most sensitive to overnight rates – yields have backed up to a nine-year high of +1.49% in anticipation of a rate rise in December. 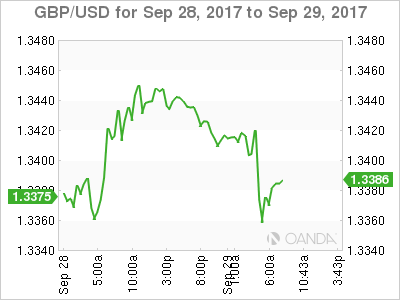 Note: The U.K. current account position alone is not enough of a reason to be bearish the pound, however, it’s a risk that leaves the UK dependent on ‘the kindness of strangers’ according to the BoE to fund its twin deficits.

Elsewhere, the EUR (€1.1811) is off its overnight highs after weaker preliminary CPI data (see below), nevertheless, the range remains relatively tight with little volume. Investors are starting to question in what form President Trump’s tax reform will get through Congress. The potential of a delay and/or watering down of the plans is expected to limit the USD appreciation potential. 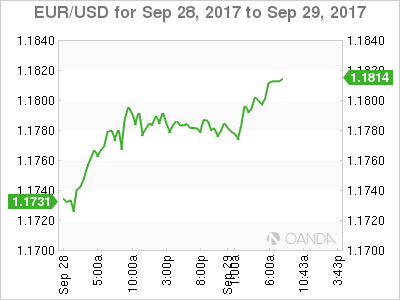 Data this morning showed that the eurozone’s annual rate of inflation was unchanged at +1.5% this month, below the consensus forecast for a pickup to +1.6%.

That leaves it well below the ECB’s target of just under +2%. Digging deeper, the core rate of inflation fell to +1.1% from +1.2%, its lowest level since June, and a number that should leave Euro policy makers a tad concerned, but are unlikely to inspire a major rethink at the ECB. 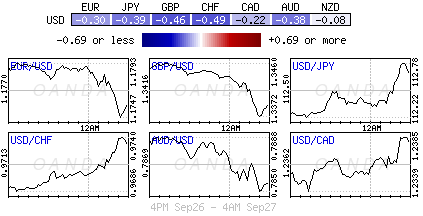