Four years in the office. Who would have believed that? Donald Trump became the 45th US President in January 2017 after getting a stunning majority of electoral votes back in November 2016 and despite losing the popular vote. Election polls were never the same afterward, as his rival, Hillary Clinton, lead them throughout the campaign.

There are two things that Trump wants as much as “Making America Great Again:” a weaker dollar and a never-ending Wall Street’s rally. Both things, however, are sometimes hard to pair.

Donald Trump has always spoken his mind and becoming a US President in the XXI century not only didn’t change that but also made his words reach millions of ears in a matter of seconds. Social media, especially Twitter, is his preferred tool. From threatening rivals to leaking data, his tweets had had a significant impact on financial markets.

Searching a bit through the web, you can find that renowned financial companies have dedicated plenty of research to the matter, defining parameters and creating stats.

The most amusing one is the “Volfefe” Index developed by JP Morgan, which aims to measure volatility in market sentiment for US Treasury bonds caused by Trump’s tweets.

According to JP Morgan’s analysts, when Trump uses the words “China,” “billion,” “products,” “democrats” and “great,” he tends to trigger volatility on 2-year and 5-year Treasury bonds´ yields.

Sentimentrader developed a Trump Stock Market Tweet-O-Meter, which shows that positive tweets have a positive effect on Wall Street, while negative ones weigh on equities. 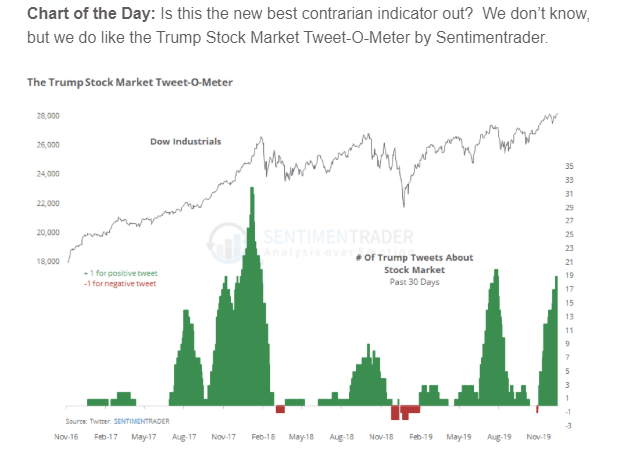 Other institutions, however, focused on the impact of Trump’s tweets on the market’s expectations for a Fed change in its monetary policy. Even after calling Fed’s Chief Jerome Powell “bonehead,” however, his central bank-related tweets have had a lesser effect on markets than those related to trade.

Goldman Sachs’ research shows that "the market moves are much larger, statistically highly significant and more clearly skewed to the downside" when the president tweets on trade.

The impeachment process triggered by Democrats is another chapter in Trump’s tweeting career. He has been accused of “cheating” in the elections that brought him to power, although he has already started his 2020 campaign and he has good reasons to do it. According to Gallup’s annual survey, Donald Trump reached the title of American’s most admired man in 2019, having tied with former President Barack Obama.

The impeachment trial on President Trump, however, has weighed on his mood and a study from Factba.se shows that the number of negative words has been on the rise while positive ones decreased in a steady trend. 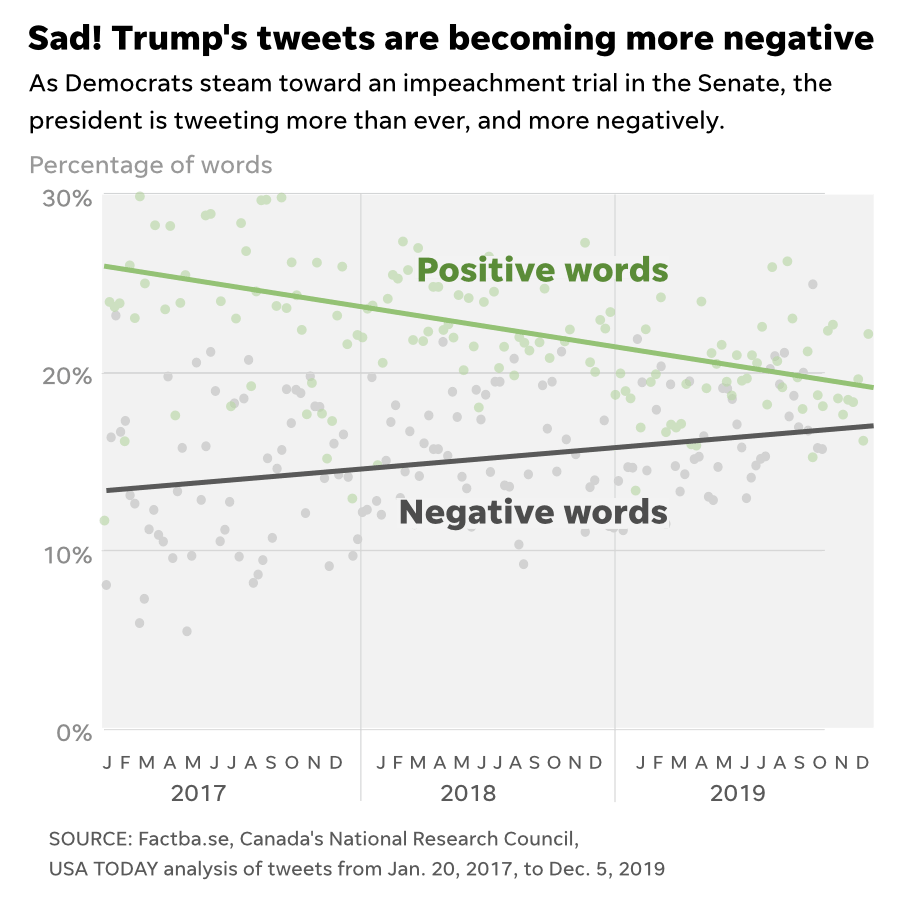 Maybe it’s thin December markets’ conditions, perhaps it is boredom, but over the last few weeks, Trump’s words have had a diminished effect on the financial world. His optimistic comments are just enough to keep Wall Street afloat and are ignored by the greenback.

Anyway, among the aforementioned studies, one shows that the more Trump tweets in a day, the lesser impact those words have on the market. So there’s your first hint. A punctual reference to China, trade, or his rival democrats, will probably have more chances to move the market.

He also continues to leak data, although he has been a bit more discrete lately. Keep an eye on him a couple of hours ahead of the release of relevant growth or employment figures.

About the Federal Reserve, whatever he says on Powell and the monetary policy is being ignored. But those tweets that affect the economy, and hence, how this last could affect the Fed’s decision, those are the ones that matter.

Wall Street will tend to react ahead of currencies. Equities’ rallies usually reflect risk-appetite, which means the dollar should ease against high-yielding rivals, although it also means speculative interest needs more dollars to buy American stocks. Trade the US dollar against strengthened high-yielding rivals and let alone those considered safe-havens.

According to today’s market picture, the pound should be ignored until Brexit gets some certainties and that won’t happen anytime soon. The Aussie should remain favored, on the back of growth progress expected with phase one of the trade deal. The Canadian dollar could also be a good choice, as oil prices are on a clear bullish trend.

As for the shared currency, the picture is a bit blurry following Mrs. Lagarde’s debut as President of the European Central Bank. Her first show was seen as “hawkish” if that could apply to any ECB stance these days. Growth in the Union remains depressed and while Lagarde hint it may have reached a bottom, that’s not entirely clear according to the latest data of the region. Still, unless the economy deteriorates further, the EUR will also benefit from risk-appetite triggered by Trump’s tweets.

One thing we can take for granted in this 2020: Trump will keep speculative interest on its toes through January to November when the US general election will take place. Whether he will remain in the office or not, that is going to be a different story.

This article belongs to the 20 trading ideas for 2020 series. Check the full list of 2020 pieces.