It goes without saying that consumer confidence and its cousins, consumer spending and retail sales, are related to inflation and inflation expectations. And while the Europeans are suffering more than the US so far with shortages of natural gas inhibiting factory work, the US is not going to be exempt. Already WTI oil is up to a 3-year high (74.52 at 6:30 am today). People notice.

Bloomberg is pushing the scare story, writing that “Even a normally cold winter in the Northern Hemisphere is expected to drive up natural gas prices further across much of the world. In China, industrial users including makers of ceramics, glass, and cement may respond by raising prices; households in Brazil will face expensive power bills. Economies that can’t afford the fuel—such as Pakistan or Bangladesh—could simply grind to a halt.”

For its part, the FT reports 50-85% of gas stations closing because they ran out of petrol due to panic buying. PM Boris is thinking about brining in soldiers to drive tankers around to gas stations, in a contingency plan named Operation Escalin. “The government announced on Sunday evening that it would temporarily exempt the energy industry — including producers, suppliers, hauliers and retailers — from the 1998 competition act, allowing companies to share information and prioritise deliveries to areas of greatest need.” Yeah, that’s always a good idea.

The retail association blames the government for too few truckers available to deliver the gas. “Ministers bowed to business pressure on Saturday and announced they would issue temporary visas to 5,000 foreign heavy goods vehicle drivers to help tackle major labour shortages in the logistics industry.

The government move came after panic buying followed BP saying last week that as many as 100 service stations had been disrupted and several forecourts closed because of a shortage of tanker drivers. Grant Shapps, transport secretary, on Sunday urged people to be “sensible” and said there was plenty of fuel at Britain’s six refineries and 47 storage facilities.”

The UK is not alone. In China, some areas are getting blackouts. We await news of factories being closed or delivering reduced output. It will be ironic if China leads a world slowdown because of oil and gas rather than a property developer default.

Bottom line, the focus is shifting back to inflation—its causes and effects, and who cares. We always think the American consumer is too relaxed about heating oil and gasoline prices, or maybe the right word is “resigned.” Central banks and others, including the Treasury/finance ministries, are content to exclude energy prices from their inflation forecasts on the grounds they can’t do anything about it. What, they can’t pick up the phone and call the Energy Secretary or the interior minister or someone?

Rising energy costs are a genuine threat to economic recovery. Boris has the right idea. He claims the UK has plenty of petrol at refineries and in storage—get it out and about. Yes, this is government interfering in free market operations. Well, that’s what happens when private business fails. As long as they don’t overstay, it’s an acceptable policy response. In the US, it would be fatal to have another crisis as we had in 1973 and 1978. The US economy depends on transportation. We already have the chip shortage; the US economy is resilient but one shortage at a time, please.

We’d like to be able to say that the country that manages the energy problem the best will have the higher currency, but that has not worked for Japan, which learned the 1973 lesson and is the most energy efficient of the G10 and probably the world. Still, the Europeans are dealing with the Russians and the Iranian, so we’d guess the US will do better. We’re dealing only with the Canadians.

We like the dollar rising outlook, subject to the warning that the debt ceiling or a new energy crisis can upset that apple cart.

Tidbit 2: Not yet a panic but time is running out for the US Congress to raise the debt limit (i.e., pay for stuff it already bought) and pass the Biden infrastructure bill, or part of it.  The government could shut down as early as next Friday (Yellen says Oct 19th). It’s all the fault of the Republicans being obstructive for no gain to them, as far as anyone can find.

Tidbit 3: We wrote that France is not a Pacific country, but that’s wrong. The Center for Strategic and International Studies has a paper saying “France sees itself as an “island state” in the Indo-Pacific due to its numerous overseas territories across the region (e.g., Mayotte, La Réunion, New Caledonia, and French Polynesia), which are home to 1.6 million French citizens. These territories provide to France the second-largest exclusive economic zone in the world, with 11 million square kilometers, second only to the United States. Along with this extensive maritime footprint, France shares borders with five countries in the Indian Ocean and 12 in the Pacific Ocean.

“Economic ties between France and the Indo-Pacific have grown significantly over the past years. More than one-third of French exports to non-EU countries go to the region. French direct investments amounted to 320 billion euros in 2018, a 75 percent increase since 2008. More than 7,000 French subsidiary companies are present in the region, with revenues increasing by 40 percent between 2010 and 2016.

“This human, geographical, and economic connection with the Indo-Pacific is complemented by a significant military presence. For the French Ministry of Defense, the Indo-Pacific is divided into several “areas of responsibility” where 8,000 soldiers and dozens of ships are pre-positioned in several bases. The primary purpose of these forces is the protection of the French territories, encompassing various mission such as combating illicit trafficking or providing assistance in the event of natural disasters. This substantial force accounts for nearly 60 percent of France’s permanent military presence overseas.”

The article is entirely self-serving but the map is fun. 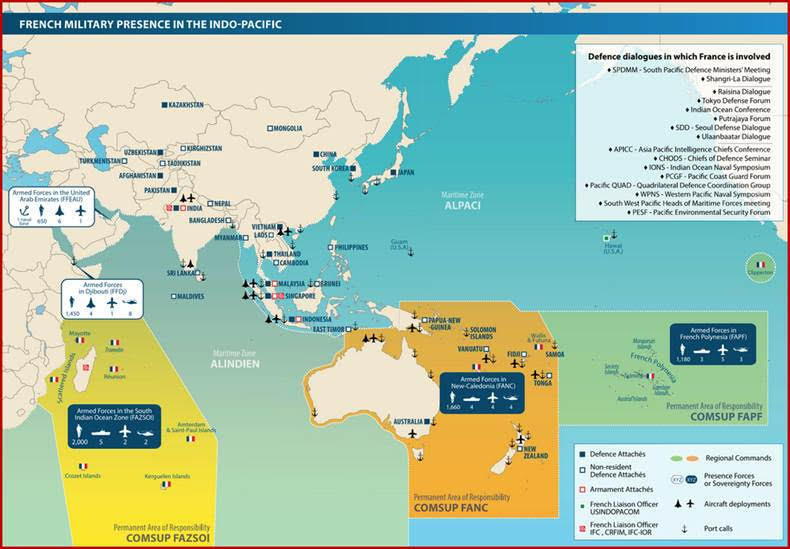