Outlook: The US data on Friday ranged from fairly bad (C-) to okay (B) but not F. Retail sales were expected to be flat but fell 1.9% m/m on various factors, including early holiday shopping and supply-chain shortages. On a year-on-year basis, retail sales rose 16.9% but we have a ton of base-effect since Jan the year before was pre-vaccine. The seemingly big increase is meaningless.

As for industrial production, it was steady at 3.7% y/y with manufacturing rose up 3.5%. Is there a lesson in here? Probably not. The Atlanta Fed’s first estimate for Q1 GDP is only 5.0%, while the Blue Chip estimate is down around 3.5%. The Atlanta Fed cares about the drop in consumer spending despite a gain in net exports and capital spending. We get an update on Wednesday. 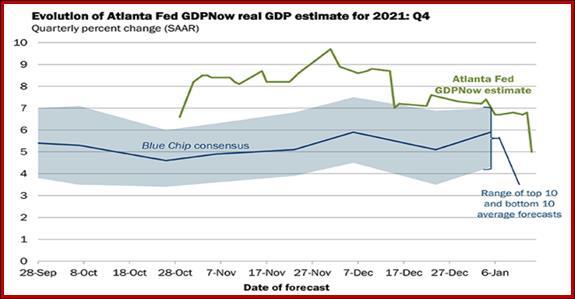 As noted above, after JPMorgan chief Dimon said the Fed could raise rates as many as seven times, the floodgates opened and we saw tinfoil hat calls for ten. Dimon said “This whole notion that it’s going to be sweet and gentle and no one’s ever going to be surprised, I think is a mistake.” Ah, but the Fed went through psychoanalysis decades ago on why the financial markets didn’t trust it, and the chief answer was lack of transparency. The Fed’s goal ever since has been to prevent anyone “ever being surprised.” Gone are the days when a Fed chief can say, as Mr. Greenspan famously said, “If you understood me, I must have misspoken.” The point is to talk a tightrope between what the market perceives as needed and what the Fed determines is right.

Still, even a few Feds are going along for the more-than-three ride, plus a slew of private Big Bank economists. While individual Fed members are free to speak, so many of them talking about flexibility if needed might be tantamount to the Fed giving permission to be viewed as unusually flexible. The FT has the litany today–JPMorgan Asset Management, Morgan Stanley, Wells Fargo, and Goldman Sachs and RBC Capital. Among the Feds, more than three comments came from Waller, Bullard, Harkey, and Evans. As for contracting the balance sheet, we have NY Fed Williams and Bostic.

For various reasons, including the rickety property sector, China dominates the news. A critical story is a drop in births for the 5th year in a row to a mere 10.62 million vs. 10.14 million deaths. The WSJ reports “the day may be near when China’s population starts to shrink. Some analysts believe the population may have already peaked.” China dropped the one-child policy in 2016 and has introduced incentives, but the birthrate keeps falling, anyway. One problem–the preference for boy babies means in the critical age group 20-40, men outnumber women by 17.5 million. Moreover, 18.9% of Chinese are 60 or older, cutting the percentage of working-age people. Bottom line–we cannot expect China to remain the manufacturing and exporting powerhouse forever, or maybe even for another five years.

Where does all this that leave risk-on/risk-off? By now the rate hike crowd has gone nuts and a majority expects three hikes by June. See the CME FedWatch tool table. That implies they see inflation remaining up around 6-7% over the next six months. Unless the supply issues are totally stalled or worsening–which might be the case–that seems improbable. Besides, three hikes in six months is crisis-level stuff. The public will start hoarding again, there will be talk of price controls, and the wage story could get even worse, especially if workers continue to stay home and the labor shortage becomes even more acute.

That idea brings us back around to Covid and whether the expected drop in cases plus increased vaccinations softens the edges of the crisis. Everyone accepts it’s a crisis–but it’s the Fed’s job to prevent crisis becoming Panic. We expect moderation in the rhetoric and this week.

If it was all the talk of multiple rate hikes that halted the dollar’s slide, moderation this week may have the opposite effect. It’s one of those FX perversities that rising rates did not raise the dollar, too. And even three hikes don’t deliver a positive real return except at the very short end. This is the turmoil caused by QE screwing up how we think about financial risk and return, and players are still struggling with it. On the whole, we’d like to call a reversal in the euro and pound, but we need more data first. Chances are good the ECB doesn’t tighten at all and the BoE tightens by less than the US. Then there’s the Russia factor, which is almost surely euro-negative and dollar-positive.

Bottom line, uncertainty is too high on too many fronts, and that “should” favor the dollar, if for the wrong reasons, economically speaking.