Even the dumbest of local news reports is covering household inflation and Pres Biden said the government is struggling to figure out how to deal with it. This could be a clue that higher inflation for longer is already fully priced in and panic is not called for. This is the “shoeshine boy” model—by the time the shoeshine boy is giving you stock tips, it’s time to get out of the market.  To translate—by the time the local press has discovered inflation, it’s already on the way back down.

It’s a tempting model but probably not right. We wrote yesterday that fresh information is changing our outlook for the duration and extent of inflation—maybe it really is going to be higher and for longer than we had thought only a few weeks ago. The supply chain problem is worsening because of Omicron—including in China--and some of the inflation factors are scarier, usually for the same reason but also because the labor shortage means wage increases are inelastic to the downside (and appearing widely in the services sectors, and the US is largely a services economy).

In addition, commodity prices are up again, reversing all the recent dip. See the chart from Trading Economics.com. The usual culprit, oil, is again a worry, with OPEC not clear on whether it can or will increase output in Feb as promised and US inventories falling. Meanwhile, it’s increasingly obvious Russian soil and gas supplies to Europe are being used as a negotiating play, and nobody can do much about it.

But the main reason to change our mind about inflation is the labor market problem, highlighted by the low payrolls number and that giant quit rate. The labor shortage is a big deal and what will make inflation last longer. That is not to say labor is going to hold the winning hand for long. When the uneducated and unskilled can make $15/hour flipping hamburgers and the average blue collar wage is $31.31, that’s about as far as the underdog can go. Did you know utilities workers make more than people in finance?

That means our idea of only two rate hikes, based on inflation tempering by the spring, is probably wrong. We can still get an annualized or year-over-year inflation rate that is falling, but not to 3.5% by the fall—4.5-5% may be more like it. More importantly, the prospect of inflation falling back to 2% or less as in days of yore is now a dead duck. That means whatever inflation rate we end up with by Q2-Q3 will be a bottom.

The money and bond markets are in for one hell of an upheaval. At what point in the foreseeable future do rates become real? By real we mean paying the traditional bit extra over inflation, whether actual or expected.  We are nowhere close to a real rate. If inflation is 7% and the 10-year is yielding 1.75%, that’s a negative 5.3%. Even using an expected inflation rate of 5% still leaves the real rate at -3.3%. Let’s take Goldman’s four hikes—where would that leave the 10-year? If each is 25 bp, and nobody is talking about a different amount, that’s only 1% on top of the zero to 0.25% that we have now. So add 1% to the 1.75% we have now (which has already built in some QT), we get a lousy 2.75%. Even the Goldman number of hikes leaves real rates at a negative.

We confess to not understanding how this is going to work. Apparently the bond market can live with negative real rates, but somehow we doubt the hedge funds, sovereign wealth funds and sovereign reserve managers are happy about increasing negativity. When inflation was 2% and under, so the negative was small, okay, maybe. But what happens when the negative is doubled or tripled to 2.5-3%? So far we are not seeing a meltdown. Why not?

Either way, QE delivered a whopping disconnect between the economy and financial markets. Re-connecting them is a weird chore, and we don’t see how “normalization” can be said to be reached until bonds deliver a real return.

Here’s a good question: if the real yield remains negative even as tapering ends, the Fed balance sheet contracts and we have (say) at least one hike under our belts, why would the stock market correct downward? An increasing number of gurus see a fat correction of at least 10%, in Q1. But even if money is fractionally more expensive, it’s still ridiculously cheap and while dividends are kind of crummy and also negative on a real basis (S&P average: 1.26%), capital gains are real. Bottom line, nobody is speaking of bond yields as competitive with equities--yet.

Beware too glib a brush-off, though. Bloomberg notes new government debt is going to be about $230 billion this year, and coupled with the vanishing of $2 trillion in demand from the Fed, we will get “a real-world test of how much appetite actually exists.”  Is it possible that prices fall so far from lack of appetite that yields go higher than seems likely today? JP Morgan—they of the four hikes this year—see the 10-year at 3%. Still not “real” but holy cow.

The FT today features a story on how real yields are really on the minds of those involved with riskier assets, and that includes tech stocks (and crypto). “For investors, higher real yields on ultra low-risk government debt make other assets relatively less attractive. That logic is particularly painful for the highly valued corners of the equity market that have benefited most from very low interest rates. The tech-focused Nasdaq Composite has suffered its worst start to the year since 2016, falling more than 3 per cent in the first trading days of the year.

“For lossmaking tech companies and businesses that only recently went public, the declines have been worse, according to closely followed Goldman Sachs indices. Shares of non-profitable tech companies are down 7 per cent so far this year, while initial public offerings in the past year have fallen roughly 9 per cent. Higher real yields are also likely to feed through to higher borrowing costs for companies, analysts say.”

Golly, companies without earnings see falling share prices? How peculiar. Nobody is talking about a tech wreck again, but why not?

Notice the dollar seems less like a desirable place to get a real return than some others. See the chart from the Daily Shot. For the least negative return, consider the CAD, AUD and NZD, not to mention Japan. The US is better than the UK and Germany, but the real winners are the positives, including Mexico. We have serious doubts about using the 10-year break-even to judge realness, but never mind. This chart doesn’t help us understand much, but the day is coming when it will—once central banks stop screwing up the sane and rational ways of judging comparative financial risk and return. 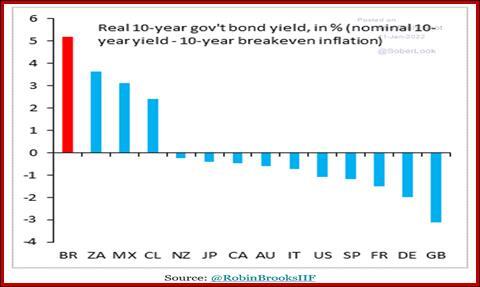 Finally, the Beige Book this afternoon will be parsed as usual for changing word counts and the like, a tiresome process to read about (and probably worse to conduct), and of limited usefulness but maybe more useful this time as conditions are changing rapidly. At some point the resolute Fed “should” be dollar-favorable, but so far the FX market is wavering and wobbling on the fate of the dollar. It’s especially peculiar to see the yen on the rise as the Japanese economy is improving by tiny steps and forecasts of growth inching upward, presumably attracting capital back home for good reasons instead of risk aversion. We are in a maybe-this/maybe-that world chock full of contradictory reasons for currency moves. Boris is in political trouble and Brexit is harming the UK economy, but sterling is up. The Fed is promising to tighten like crazy but the dollar is soft. It’s a go-figure world. Cut positions to the bone.