Outlook: Today offers little by way of new data so we can wallow in the rate stories. We get the usual unemployment claims, current account and the Conference Board leading indicator. Tomorrow is a slew of PMIs.

Fed chief Powell said yesterday “We have got to get inflation behind us. I wish there were a painless way to do that. There isn’t No one knows whether this process will lead to a recession or if so, how significant that recession would be.”

After Powell’s hawkish words and tone yesterday, we are about to get a fistfight over GDP and inflation going forward. The Fed sees 0.2% growth for the year (Q4/Q4) and a median rate of 1.2% in 2023.

Keep in mind the Atlanta Fed’s GDPNow forecast from Tuesday, a lousy 0.3% for Q3 (from 0.5% the week before). We get an update next Tuesday (Sept 27). The chart shows the Blue Chip consensus is already below zero. Oxford economics sees zero growth this year, a recession in the first half of next year, and zero growth for the full year 2023. At this moment, Oxford seems to have the more realistic point of view over the Fed.

What does this mean? Can the Fed not estimate factor lag better than a ragtag bunch of traders? A sizeable number–21.3%--foresee Fed funds higher by 25 bp at end-2023, too. That’s a near-normal distribution around the Fed expectation.

The fight is going to continue as to how much recession everyone can tolerate before central banks are pressured into relenting. One outfit that seems sure it can weather the storm in the Swiss National Bank with its bold 75 bp hike, ending the era of zero and negative rates in Europe. We can guess the SNB would not have been so bold if it thought inflation would be only fleeting or easily roped in.

The fallout, as expected, will be in housing, labor and the stock market. Because of the labor shortage, it’s not clear unemployment is going to rise to the Fed’s expected 4.4% next year (from 3.7% now). Which sectors, exactly, are going to see hundreds of thousands of lost jobs? The NYT quotes the BoA chief economist: “The U.S. economy has entered a recession every time the unemployment rate has risen by at least 50bp [basis points] in the last 75 years.” Okay, but where?

As for the stock market, the S&P has not reached the June low yet. On the chart, the red moving average is 40 weeks (= 200-day). If it goes all the way to the 62% retracement level, that would be 3193. Well, maybe. We suspect it won’t be that bad on the idea that all the bad news is already out–sell on the rumor. Funnily enough, the news that can trigger “buy on the news” may have little or nothing to do with labor/wages or even inflation per se, but perhaps earnings bottoming or some other factor. As the S&P itself falls, the dividend yield goes up. It’s only a little under 2% now. As the dividend yield starts to match the fixed income yield, the index can recover. Well, maybe. That’s an old-fashioned approach and not generally accepted wisdom.… 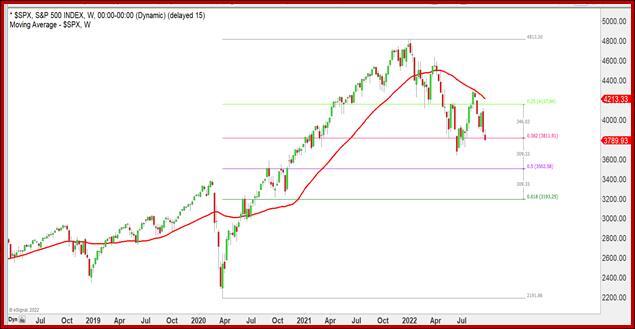 About inflation: An article in the Project Syndicate newsletter caught our attention, not least because the economist says what we say, which is always nice to see.

The title is “Why US inflation is Headed Down” and points out the inflation we have everywhere today is “fueled by more than just domestic demand. Supply-chain disruptions related to China’s restrictive zero-COVID policy, the effects of the Russia-Ukraine war on food and fuel prices, and rising labor costs all play a part. These supply-side factors largely fall outside of what the Fed can control.

“The US economy, however, is uniquely positioned to overcome this particular species of inflation, owing to its relative energy and food independence, abundance of immigrant labor, strong production capacity, and access to the capital needed to maintain and increase domestic manufacturing.”

To address just a few of these: the US is a net exergy exporter. “In 2021, US energy exports reached 25.2 quadrillion British thermal units (Btu), exceeding energy imports by about 3.8 quadrillion Btu. And in the first half of 2022, it exported more liquefied natural gas than any other country. Europe, by contrast, imported roughly 58% of the energy it consumed in 2020. In fact, all 27 members of the EU have been net importers of energy since 2013.”

Another nugget: We tend to think of manufacturing as having departed these shore to cheaper-labor countries. Not entirely. “Finally, the US accounts for 18% of the world’s manufacturing capacity, making it the world’s second-largest manufacturer, after China. Manufacturing accounts for $2.3 trillion of US GDP, employs 12 million people, and was recovering in the ten years before the pandemic. According to McKinsey, the US economy added 1.3 million manufacturing jobs between 2010 and 2019.” Reshoring will stabilize prices.

“There are already signs that US inflation might be cooling. US import prices (which exclude tariffs) fell by 1.4% in July for the first time in seven months. Meanwhile, core inflation in goods and services (excluding food and energy) fell to 5.9% in July from a high of 6.5% in March, before rising again in August.

“… we cannot expect inflation to return to the Fed’s target of 2% anytime soon. But we can expect inflation to stabilize in the mid-single digits – an outlook that can give those allocating capital some degree of confidence in the US economy. In fact, from an investment perspective, it is hard to find another economy that can match what the US offers: ample natural resources, effective governance, a history of immigration, and a global reserve currency. That is an ideal inflation-busting toolbox. By comparison, most other countries are far more dependent on the global economy. In today’s world, that leaves them more exposed to inflation.”

To be fair, these are ultra-big, long-term fundamentals and not what drives the market, which prefers more immediacy. As noted before, we have to get through the slowdown/recession firs, before inflation lessens. Never forget the lag.

Political Tidbit: Cable news is (mostly) full of commentators jubilant that the torrent of blowback against Trump is, finally, gaining hurricane strength. Anyone paying attention has long known that Trump is a crook, a liar and a grifter, but somehow always escaping the short arm of the law. Exceptions were Trump University and the charity, both closed at some cost to Trump.

Now the law is growing longer arms and the State of NY is suing Trump and his super-entitled kids for $250 million for fraud. This comes on top of Trump losing his case in the appellate court over his claim to classified documents. A total of six cases are wending their way toward indictments. And the FT reports his political action committee raised only $43 in August. Politically, it remains to be seen whether the rats flee the sinking ship or go down with it.

Geopolitical Tidbit: It will be forgotten in the end, but worth noting today–the start of Russia’s conscription of some 300,000 soldiers set off a flood of deserters. Reuters reports “air tickets out of Moscow soared above $5,000 for one-way flights to the nearest foreign locations, with most sold out for coming days. Traffic also surged at border crossings with Finland and Georgia.”

Meanwhile, Ukrainian Pres Zelinsky asked the UN to kick Russia off the Security Council, since it’s all too obvious Russia does not subscribe to UN principles, something Pres Biden asserted, too.