Outlook: We get some non-movers today like the Philly Fed, Sept existing home sales, and leading indicators, but let’s face it, jobless claims own the space. Claims are not behaving as expected and are wildly at odds with job openings. Initial claims are creeping toward the pre-pandemic level of 210,000 but exceedingly slowly. Last week it was 293,000 and this week the consensus is 300,000, with TradingEconomics at 295,000.

Continuing claims is getting more attention, not least because at last, it’s dropping. Last week it was 2.593 million and the consensus forecast is 2.550 million for this week, but TradingEconomics gets 2.475 million. See the charts. It looks like an appropriate set of gains, and yet there are 10.4 million jobs still going begging while a record 4.3 million people quit their jobs in August. Those quitters and job-rejectors want higher pay, better working conditions, and some unnamed reward, like respect. Strikes are just the top of the iceberg—there is a malaise in the US working class.

In yesterday’s Beige Book, the Philly Fed noted “Childcare issues, early retirements and general burnout continued to depress the labor supply.” The Beige Book is a snore but did validate the nexus of ideas combining slowing growth due to supply-chain disruptions, rapidly rising prices, the labor shortage, and lingering fear of Covid. The WSJ reports the net outcome is the Q3 slow down to 3.1% from 6.7% in Q2. As we noted yesterday, the Atlanta Fed has a far worse estimate of 0.5%.  Just wait—next week when the data comes out, headlines will scream “growth cut in half” (or “killed entirely”).

We are not alone in smelling a shift in sentiment from “We’re all right, Jack” to abject fear of recession and/or stagflation. It’s pretty clear that some high-rising price components are not going to be transient, like housing and energy costs, and it could take up to a year to get supply chains fixed. The idea of inflation falling back by (say) March is a fantasy. Therefore, even if the Fed stays with the tapering announcement at the November FOMC, and no one doubts that by now, the first hikes might get pushed out on crummy growth or brought forward on scary inflation. So which is it? Tentative answers to this question will drive a lot of prices going forward, including bonds and FX. If the slowdown story dominates, we may well get risk-off and it spreads to other currencies, leaving the dollar a safe haven again.

The CME FedWatch tool shows that by the March meeting, a big 82.3% still expect no change in the current 0-0.25% rate. By June, it’s still 49.5%, and it’s not until Sept that the number shrinks to 23.1%, and by Dec, 6.8%. The number of hikes increases as time goes by. As everyone keeps warning and perhaps not often enough, the Fed funds futures are a seriously bad forecaster of actual future rates.

Then there are the other countries that will be leading the US with hikes, including New Zealand, Australia, Canada, and the UK. The FT has a story by a writer improbably named Tommy Stubbington (straight out of Wodehouse) complaining that a BoE hike before March poses a shock to the bond market, which has to swallow the end of reinvestment in £28 billion of bonds that will mature on March 7. This is the biggest single event since QE began.

“Investors are left wondering whether a hefty slice of demand — which until recently they took for granted — is set to evaporate. The figure is large enough to spark some big market moves, analysts say.” Equally important, these delicate creatures in the bond market were told by the BoE that unwinding would be predictable and gradual. But £28 billion in hardly gradual. To be fair, only “£9 billion of bonds in the BoE’s portfolio are due to mature in the 18 months following March’s redemption.” Besides, higher rates “risk choking off the UK’s economic recovery and will do little to combat an inflationary burst that is largely the result of supply bottlenecks and a global surge in energy prices” and (see how important we are), the BoE’s hint of a hike this year “helped trigger a global bond sell-off amid speculation that the Federal Reserve too might opt for earlier tightening.”

It would seem that once well-warned a good five months in advance, plans can be made to avert a Shock. Notice that the CME BoE Watch tool shows 68% believe no hike in November but by the Dec 16 MPC meeting, 52.2% see a hike. A month ago, only 6.7% foresaw a hike in December. This is indeed an acceleration of expectations but it seems a bit hysterical to assert the Fed is going to tag along with the BoE in lockstep. After all, the US is more or less energy independent and has a far bigger economy in the first place, and lacks the drag of Brexit, among other UK drawbacks, including Boris. 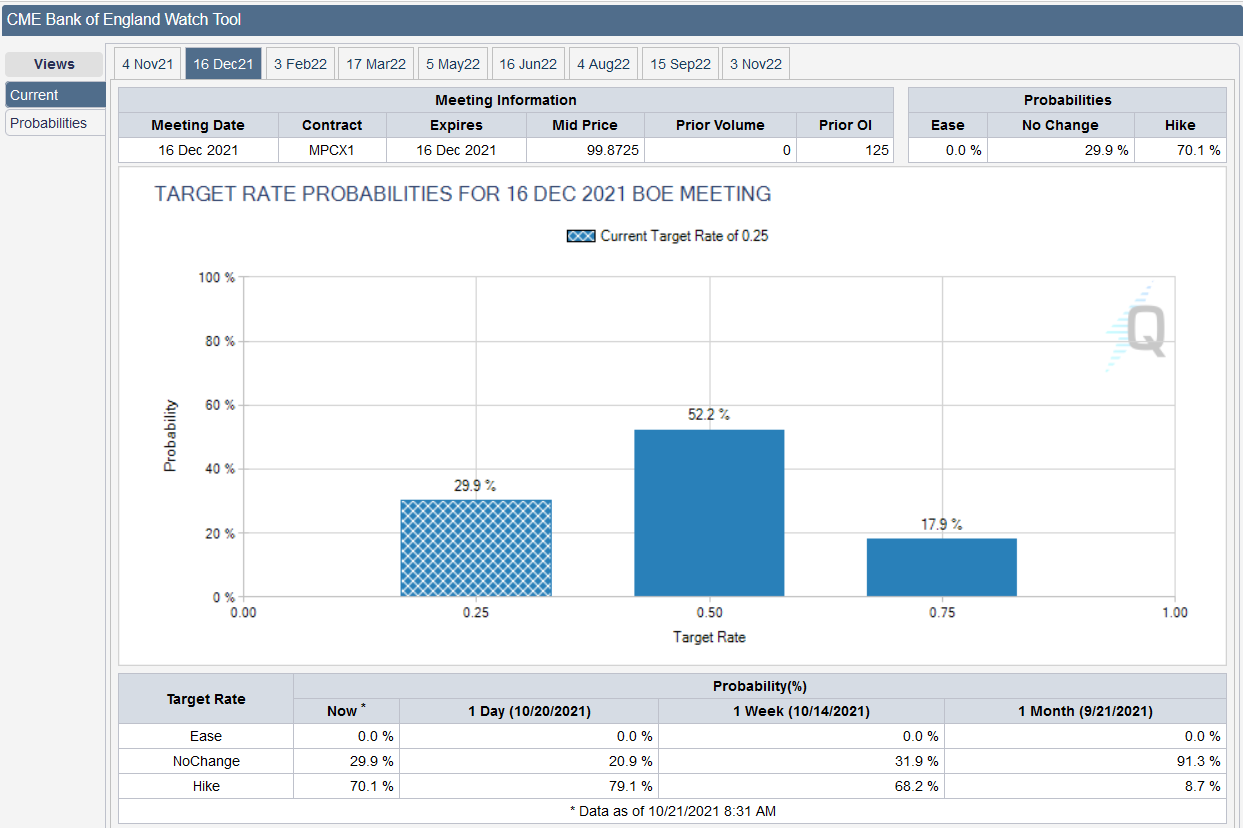 While traders figure out which way to jump, a fair number are just sitting on the fence and quietly paring positions. We are feeling queasy about some of the charts, showing currencies stretched to ridiculous limits (CAD). We don’t see breakouts in our future, if only because we can’t name the triggers, but there is a whiff of change in the air. Caution is warranted.