Outlook: The FX market is confusing. We have the classic safe havens Swiss franc and yen back on the rise, but is that risk sentiment or a response to having been deeply oversold? When the dollar/yen staged a pullback after a giant rise to end-March, the pullback was almost exactly 38%. This time the 38% retracement of the recent rise would take it to 113.39, or very little more than we have already.

Then there is the utterly confounding pound sterling, which has a dozen factors against it and one for it, but that one hard to interpret because slathered in public relations. The BoE chief economist Huw Pill (how do you pronounce that?) told the FT inflation is likely to rise over 5% early next year and the Nov 4 policy meeting would make a “live” decision on rates, whatever that means. Remember a few days ago, UK inflation fell to 3.1% in Sept from 3.2% in Aug, so this is a new “forecast.” Still, he also said “We do not see, given the transitory nature of what we’re seeing in inflation in our base case, a need to go to a restrictive stance,” interpreted as meaning rate hikes will not exceed the 0.75% pre-pandemic level.

Sterling is sitting smack on a hand-drawn support line, possibly because wild forecasts of big and multiple rate hikes got dialed back by these remarks, which seem hawkish but are designed to show the BoE is in charge and knows what it’s doing. In other words, central bank manipulation. We would not be surprised to see sterling break support and fall to and below the previous low from two days ago at 1.3744 in a classic “buy on the rumor, sell on the news.”

Then there is the conflict between falling commodity prices and rising inflation expectations. We can’t expect them to line up without fail every day, but the rise in inflation expectations is a little strange. See the chart from BDSwiss. In the US, the 5-year breakeven “jumped 17 bps to hit a record high (data back to 2003) while 10-years were at the highest since April 2011. The resilience of stock markets in the face of such higher inflation expectations suggests that investors expect central bankers to refrain from tightening policy to a restrictive level,” meaning Pill’s pre-pandemic level. 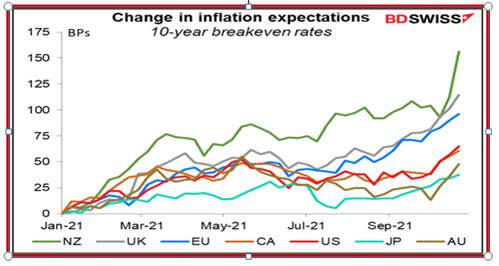 Yesterday the Daily Shot featured the sharp rise in the 5 and 10-year breakevens (indicating inflation ahead) and the vast increase in money supply. Long-time readers know we periodically have to trot out the Fisher equation (now about 100 years old, golly) stipulating that money supply times the velocity of money (the multiplier) equals GDP times inflation. If money supply is rising but velocity is falling on the left-hand side of the equation, they cancel each other out and you don’t get inflation on the right hand side. Like all truisms, this one has issues, but it works extremely well to forecast both growth and inflation. Deduction—inflation fears are legitimate because of supply chain issues and raw materials costs, but not from reckless conduct by the Fed. 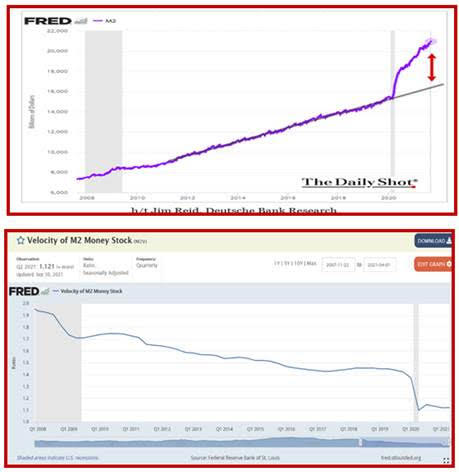 We are not so sure about the global inflation situation. If we take the PMI’s as reliable forecasters of inflation in Europe, we see problems. As Bloomberg summarizes it, the supply squeeze is “causing the steepest decline in French manufacturing since the pandemic lockdown. Business activity in Germany fell to an eight-month low. For the euro-area as a whole, momentum slowed with selling prices accelerating at the fastest pace in two decades as firms passed costs on to customers.”

Bloomberg has one scare story after another. See the chart, used to illustrate a story on big international companies raising prices left and right—Unilever, Nestle, Procter & Gamble, et al. But the inflation story is global and not helpful in figuring out what is happening in currencies. It’s possible the BoE and Fed are being seen as faking it—admitting inflation but really intending to let it run hot--which would account for cutting long positions, but this is overly cynical. We prefer the re-positioning narrative, whatever the underlying cause.

Addendum: Despite Evergrande having made the dollar coupon payment at the last minute—the source of the funds unknown—we still have to worry about the slide in Chinese growth. One bright spot—exports from neighboring tech giants (S. Korea, Taiwan, Singapore) are all rising like mad due to high Western demand and overcoming at least some of the supply issues. China can easily rejoin the club. And we need China because it really does feed growth elsewhere.

See the chart presented by Authers in Bloomberg from Matthews Asia. It shows “China’s growth is special. Since 2001, the country has accounted for more of the increase in global GDP than either the U.S. or the EU every year. It’s been the world’s grower, and spender, of last resort. It even expanded last year.” Warning—we don’t know how “contribution to growth” is measured. Cause and effect are tricky when it comes to growth. There should be lag that is not obvious, either. The US has plenty of homegrown growth independent of other countries. The “rest of the world” is largely Africa, Latin America and other EM’s, including big countries like Indonesia, Russia and Iran, all of them oil producers… So we don’t buy it wholesale, but it’s a dandy chart all the same.

In the absence of ANY intervention by China to fix the Evergrande debt problem, Evergrande will default this weekend as its 30-day grace period expires. What can the Chinese leaders be thinking? Most of the debt of Chinese developers is owed to Chinese apartment buyers, not foreign investors, but the consensus had been that the government would let the foreigners take their losses, not the citizens. Now it looks like everybody loses--unless there is as sweep-up plan, like full nationalization. What is the difference between nationalization and expropriation? And let’s add “confiscation” while we’re at it.

It turns out there is quite a lot of academic literature on the subject, and we imagine the Chinese researchers have been reading all of it. Nationalization encompasses expropriation but may not be confiscation if the ending government ownership takes the form of a trust for the benefit of the citizenry at large. Here’s a twisty explanation: “At its essence, an expropriation is the taking of private property by a government acting in its sovereign capacity. Nationalisation, a form of expropriation, generally covers an entire industry or geographic region. Nationalisations typically occur in the context of a major social, political or economic change. While international law recognises that states have the right to nationalise or expropriate, that right is subject to certain conditions under customary international law and investment treaties. These conditions have led to a distinction between 'lawful' and 'unlawful' expropriations, which can have consequences for the standard by which damages for the expropriation are assessed.”

Got that? Here’s a way out: under international law, expropriation needs to be for a public purpose, which we interpret as meaning “punish the irresponsible Evergrande directors.” Today most expropriations are indirect, making the central question “whether the investor has been substantially deprived of the value of the investment, even if not of the entire legal interest.” These are key concepts in cases over the years in Mexico, Libya, Argentina as well as the USMCA.  Facts are critical—"Not every state measure reducing the value of an investment will amount to an expropriation.”

Ah, so if and when China nationalizes Evergrande, it becomes the debtor and can extend the duration of the defaulted debt without necessarily changing any other terms. If the debt holder wants to exit ahead of maturity, that’s its problem—the state will pay, eventually. Thus China can escape foreign asset holders’ wrath. What about the domestic investors who are not getting the apartments they paid for? Again, postponement may well be a legal path out of trouble, and the Chinese citizens will have no recourse but to wait.

China keeps insisting Evergrande is a one-time case and not the fountainhead of cascading defaults or financial market instability, but we need to read the last chapter before concurring. It seems improbable such a big deal can just fade away. The lack of transparency is bothersome. There is some worry that China will stage a distraction, like picking a shooting fight with the US over Taiwan, which would be the classic next act. That may be why Pres Biden repeated support for Taiwan yesterday (the source of the biggest chunk of chip imports), although some skeptics say the comments were aimed at Taipei and not Beijing (in case Taipei was getting frisky and provocative).

We see one other problem with this outcome—it fails to stop or even alter the propensity of Chinese citizens to put their savings into real estate instead of stocks and bonds, and on its own, doesn’t do anything to cut back overleveraging by property developers. That takes a separate set of regulations. If nationalization is the outcome, so the state is the lender of last resort, that could be why China was (just this week) able to sell new dollar bonds to heavy oversubscription and at yields only a fraction above the US equivalents.

Tidbit: Garnering much attention and scorn yesterday was Trump launching his media company “TRUTH Social” under the umbrella of a SPAC (DWAC). No product, no revenue and income projections, no marketing plan—nothing except the name and entirely unsupported claims that the company will be worth $1.7 billion.  The SPAC’s stock rose over 400% by 1:30 pm and closed up 356.8% on the day. One editorial says well, yes, Trumpies will buy the stock and herd-followers will, too, because if there’s one thing the guy does well, it’s bamboozle the public using the media (just not the written kind, seeing as how the blog sputtered and fell to earth). We are not so sure. Trumpies not only don’t read, they are not stock market players. But still, there’s nothing like this awful story to drive you to gin.