Outlook: The US calendar includes retail sales, already acknowledged as disappointing because of auto sales (because of the chip shortage). We also get May business inventories, used by egghead economists like the Atlanta Fed to predict GDP. Then there is the University of Michigan preliminary July consumer confidence report and associated inflation expectations. The consumer is never right about inflation but the point is that high expectations can become a self0fulfilling prophecy. Finally, TICS will disclose capital flows but is several months late and garners attention only when some news outlet is looking for a headline.

It seems a little early, but wild growth expectations and the feel-good sentiment is already meeting data disappointments and it seems markets are overreacting to diminished hopes. That’s diminished, not dashed, and aside from Covid worries, there is plenty of reason to think this gloom is as premature as earlier angst about inflation and overheating. We get a fresh version of the Atlanta Fed GDPNow later today that may mitigate last week’s lousy number, a mere 7.9% for Q2 GDP from over 13% at end-April. That drop was due most recently to the Markit and ISM PMI’s last week. Today the hope for rescue lies with business inventories, something nobody buys economists is willing to watch. 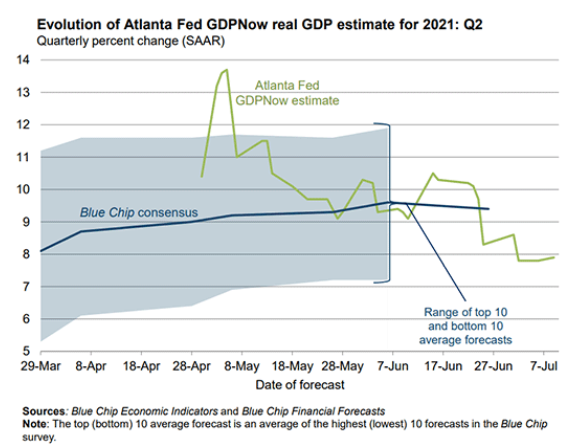 To state the obvious, if the US (and world) is getting a slowdown, that implies a slowdown in inflation, too. Nobody knows if and when supply blockages, in particular, will abate (and associated shipping costs), but TreasSec Yellen said it will be “several more months” before price pressures fall back. This is not terribly useful because she doesn’t define “several” but as we have written before, that is probably sometime in Q4. We are all making it up, of course, if based on past experience. A hundred and one thing can go wrong.

One of the things is climate-induced supply problems. The world is seeing massive flooding in Germany and Belgium and wildfires in the US West, not to mention those heat bowls. When we have one hurricane, markets barely hiccough, but a series occurring simultaneously might be a problem. Expanding supply capabilities is notoriously hard in the first place, especially in mining; finding ships to move the stuff can also take a horribly long time. The Baltic Dry index combines both factors and is abating somewhat, but to imagine it will return to “normal” levels in a few months is wishful thinking. 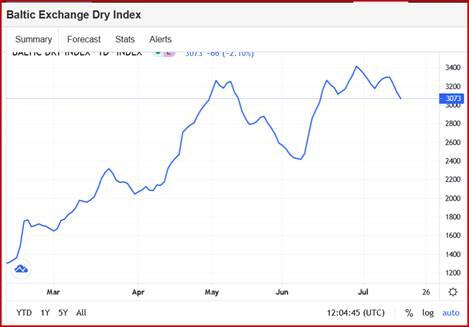 A reality check would note that expectations of a growth pullback has not hit commodities. We have special cases of a price drop, as in lumber, but as we pointed out at the time, that doesn’t mean house and renovation project prices will go down. One step forward, two steps back. House prices are notoriously sticky downward except in a recession.

So, to end the week, we forecast that inflation is not going to abate on the Fed’s schedule, meaning before year-end. First, those supply issues will get cured eventually on the normal workings of capitalist supply and demand, but supply issues take a notoriously long time to get fixed and the fixes will not be done in just a few months.

Second, state subsidies to unemployed workers come to an end in the next 6-8 weeks and the new child-care subsidies—already in pockets—will relieve parents, especially women, who can now start filling those 9 million jobs. Almost by definition, higher employment means higher demand for goods and thus inflation in everyday consumer prices, following inflation in pandemic goods like exercise machines and computers.

Third, of course, is the $3.5 billion stimulus bill that is 99% sure to get passed in September, if the Dem leaders can keep on track. Quick, name something in here that implies declining inflation? The only factor might be that Covid 4th Wave, but even then, a fresh lockdown is all but impossible in the US.

The Fed has rooms full of economists who can see the same factors and is far better detailed. If they see specific reasons for inflation to abate, they should start talking about them before the great public gets the inflation bit in its teeth. The implication is that the Fed is going to have to re-think the tenure of the temporary inflation. The big bank economists, too, have as much influence sometimes as the Fed. They are going along with the Fed so far but from a hawk's eye view, some revisions are going to be needed. Let’s say the number by Q1 next year is 3.5%, on the low side of anything realistic. Is that an acceptable number to stick to the averaging process? How much is too much?

The Fed is out of step with some of the other central banks. So is the BoE, for what that’s worth. The UK has both Brexit and Wave 4, so the two central banks are not really comparable. But in any case, for yields to be so low is unrealistic and causes tension. Watch the U Michigan consumer inflation expectations today!