In a copy-book landing, EUR/USD has played out exactly in accordance with the following weekly mini-series of bearish analysis:

The single currency's dynamics just keep getting more interesting as the weeks go by, from both a fundamental and technical analysis.

Staying with the technicals, it would be prudent to also acknowledge what is happening in the background with regards to the CFTC data.

While the data has little bearing on the immediate spot market and considering it is already out of date by the time it is reported, still, it is definitely worth noting that the market's long position is close to near-term highs.

One could therefore argue that there is plenty to unwind.

However, even so, there is a commitment from the bulls, evident in the futures market with 12k longs added to total 191k. The record high is 212k.

Focus is on the US dollar

Going down to the charts, it is also worth noting that the DXY has now completed a compelling confluence of the daily 61.8% and weekly 50% Fibonacci retracements: 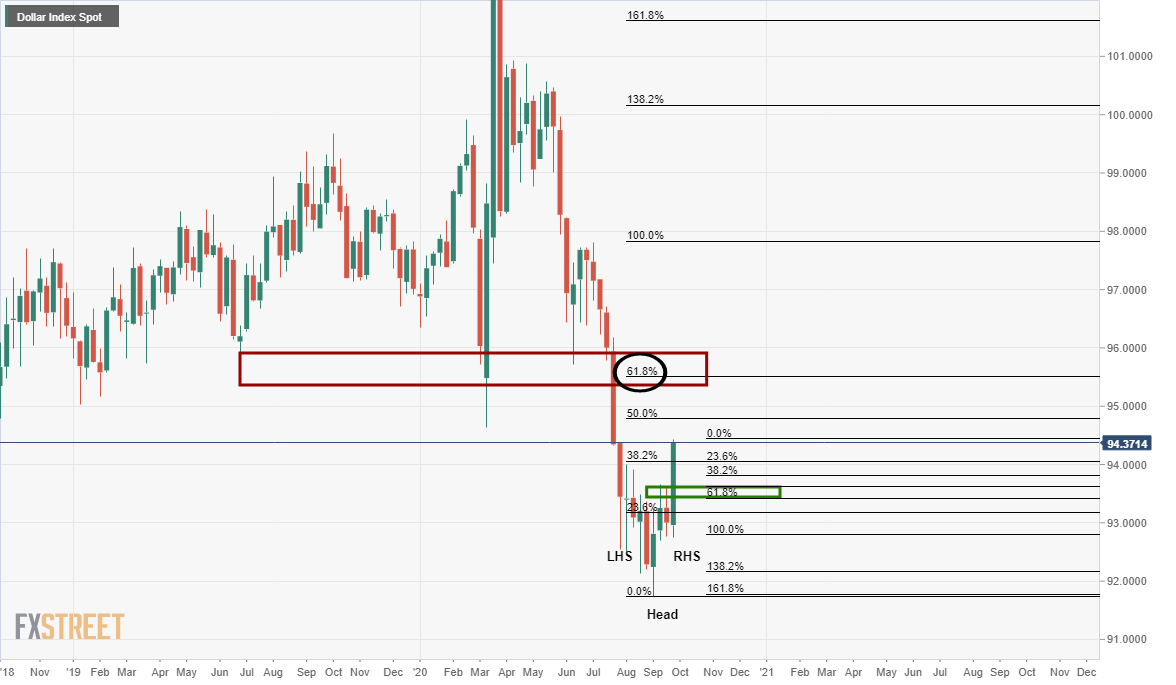 At this juncture, only time will tell as to what time frame the market is jiving with the most.

If its the weekly chart, then there is evidently more upside to come from this dollar's rally until the 61.8% Fib and prior lows.

However, the combination of a 50% mean reversion and a 61.8% which also meets the March spike low in what has been a rally with no meaningful correction is expected to cap the upside, at least for the meanwhile.

As displayed in the daily chart above, there is a support structure that needs to be monitored for tests of 94.20. A break below it would then be expected to retest it as a new meanwhile resistance.

If it holds, this would confirm the corrective bias in the DXY. In doing so, the euro can be presumed to also correct its bearish trajectory for the meantime.

The following is a topdown analysis of the single currency starting with the monthly chart as follows:

The above chart offers the three layers of the support structure.

The weekly chart offers the layers of support structure targets as well as the Fibonaccis based on current spot.

There could be some more room to the downside within the first layer of support structure until a meaningful upside correction.

However, the daily chart shows the price has already made a significant downside impulse that has started to decelerate.

It now meets a 61.8 % Fibonacci retracement of the early summer rally.

A retest of the new resistance structure in the lower end of the 1.17s should be expected before more significant selling towards the 1.14 area and lower.