Here's another post for those of you who'd like to trade based on chart analysis than on the events. News and technical analysis day trading are two different stories, and it's almost impossible to combine these two.

This article is for those of You who would like to develop something I call a “Trump Tweets Proof” trading strategy. President’s Trump’s surprising comments on Twitter can swing markets. They are an example of events that are not only themselves unpredictable but also can move the price of a USD-based instrument either way.

It's challenging to develop an effective trading strategy when you have to verify your methods against such events.

Unless you are a master forex trader or you’d like to take an enormous risk, you should consider trading any combination of the so-called eight major currencies. These are merely the currencies of the world's biggest economies.

Here are the eight major currencies:

Why USD is better for you than, let’s say, the Thai Baht? Because there’s a much bigger volume of USD in the circulation and therefore it should be less susceptible to big players manipulating it.

There are many uncertainties in the forex market - that is why you should take a “negative road” - know what you’d like to avoid. And it’s best to avoid big players (such as international banks) using their size to trade against the crowd - that is all the smaller investors including you.

In this post, I will present the advantages of trading so-called “cross pairs” - the currency pairs that don’t involve the US dollar.

The advantages of GBP, CHF, and EUR

The Swiss franc, British pound and euro are big enough but not as popular as USD, which is dominating forex trading. The most traded pair in the world is EURUSD. It seems to be just a fashion because there aren’t many rational reasons to do it.

First of all, the instrument you want to trade using chart analysis should be trending most of the time. Whenever it’s an uptrend or a downtrend you can make money trading CFD. It’s much more difficult to do so when there’s no visible trend. And with EURUSD it happens often.

Second, EURUSD as the most popular pair is at the center of interest of the biggest forex players (including international banks). This raises the risk of somebody with market share significant enough to go against the crowd.

Following this logic, you should try to avoid USD pairs. This makes GBP, CHF, and EUR more attractive.

Let’s take the euro. Since it’s the currency of Eurozone - which consists of 19 countries - it’s less affected by macroeconomic news such as nonfarm payroll (NFP), which can cause a turmoil in all USD instruments.

The political events in the Eurozone countries also have a limited effect, since their influence is somehow diluted. Even if German Chancellor Angela Merkel started to tweet like Donald Trump, it would cause less market stir.

The history shows that euro pairs (except for EURUSD) are not affected by news from America. This replaces unpredictability of Donald Trump with a boring, predictable economist Mario Draghi, who has been the president of the European Central Bank since 2011.

Now let's take a look at pound sterling. The historical data shows that the currency does not correlate with the Swiss franc as much as euro (for a long time the two were pegged together) or as USD and Japanese yen, who often react to random global events similarly since they are considered to be a safe haven.

The good thing about the Britins pound pairs is that they seldom stagnate. You can trade with or against the trend most of the time. This is an environment much more natural to make a profit in. The UK related events are much easier to grasp, as there are just fewer of them.

The Swiss franc is the most “news resistant” of all the eight major currencies which increases the currency’s predictability substantially.

Now let’s take a look at the two pairs I’m discussing in this post.

The EURGBP is a slow instrument. It has a low average true range (ATR), which means the volatility is low; however, the trends are active and visible. That is why it's great for people wanting to develop their trading skills not worrying about the NFP or tweets. The pair is trending strongly over time and seldom stagnates. This is why you can test your trading signals with it efficiently. There is much less noise here than in case of other pairs.

On the other hand, the GBPCHF is much faster, with higher ATR. The pair is also tweet-proof. It also trends even better than EURGBP.

If you are not interested in news trading - and that's what this article is about - avoid trading or having some strong positions open during the upcoming Brexit (or no Brexit) milestones.

If all three discussed currencies are so attractive, you may wonder why not trade EURCHF. The reason is simple - there's a relatively short history of the two currencies moving independently. They have been closely correlated for years until the Swiss franc was set loose at the beginning of 2015. We are learning more and more about the pair so that it may be an exciting option soon.

A good piece of advice for the risk-averse traders, or the ones that’d like to practice before taking on a substantial risk is not to trade the two pairs at the same time, since this creates a position where you are too much exposed to the pound, which can be risky when something big happens, especially Brexit-related. 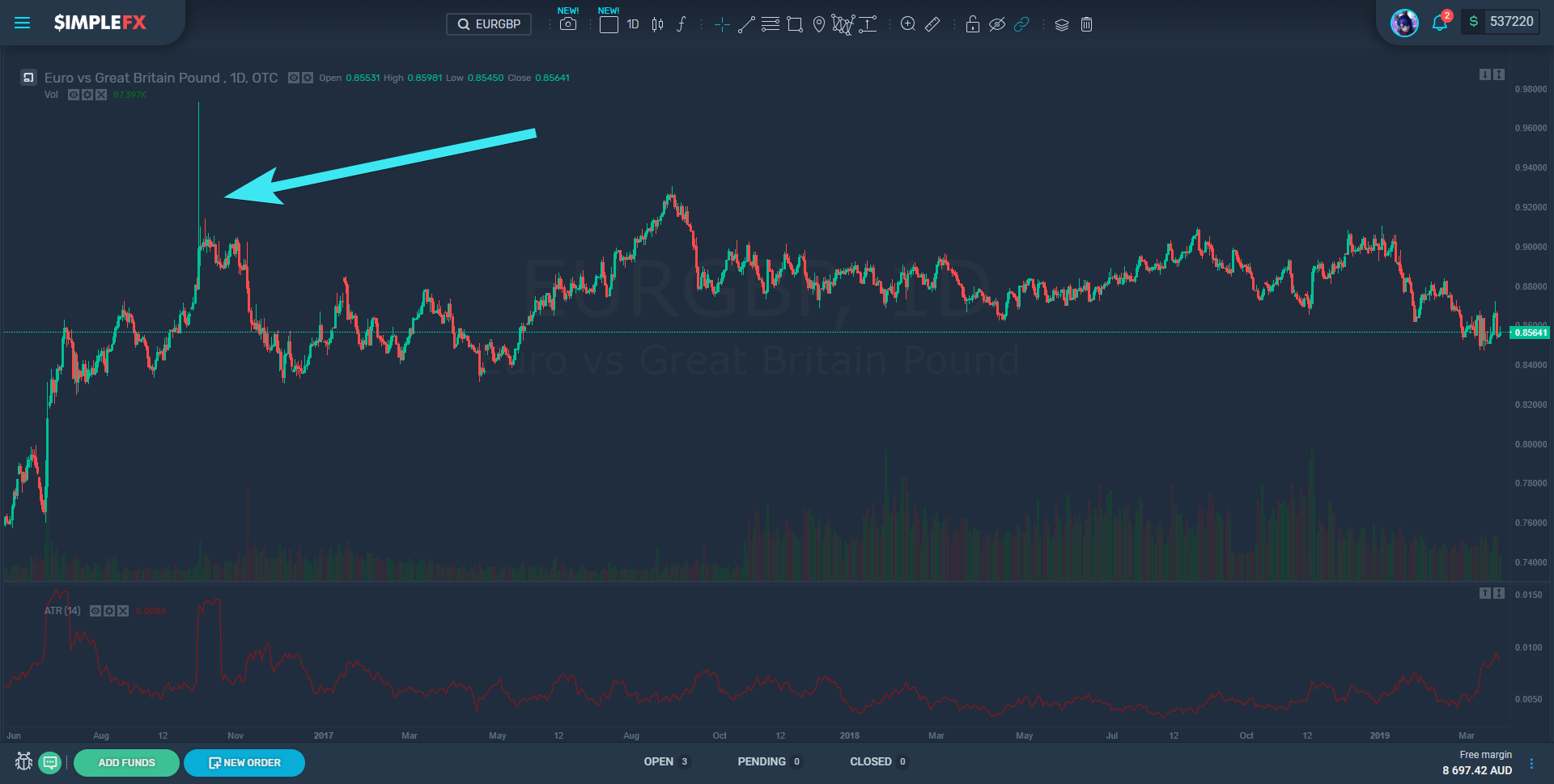 EURGBP daily chart - nice trends from Feb 2016 (you can see the Brexit referendum candle). It's less volatile than GBPCHF but relatively rarely consolidates, and when it does signal it with the volume. 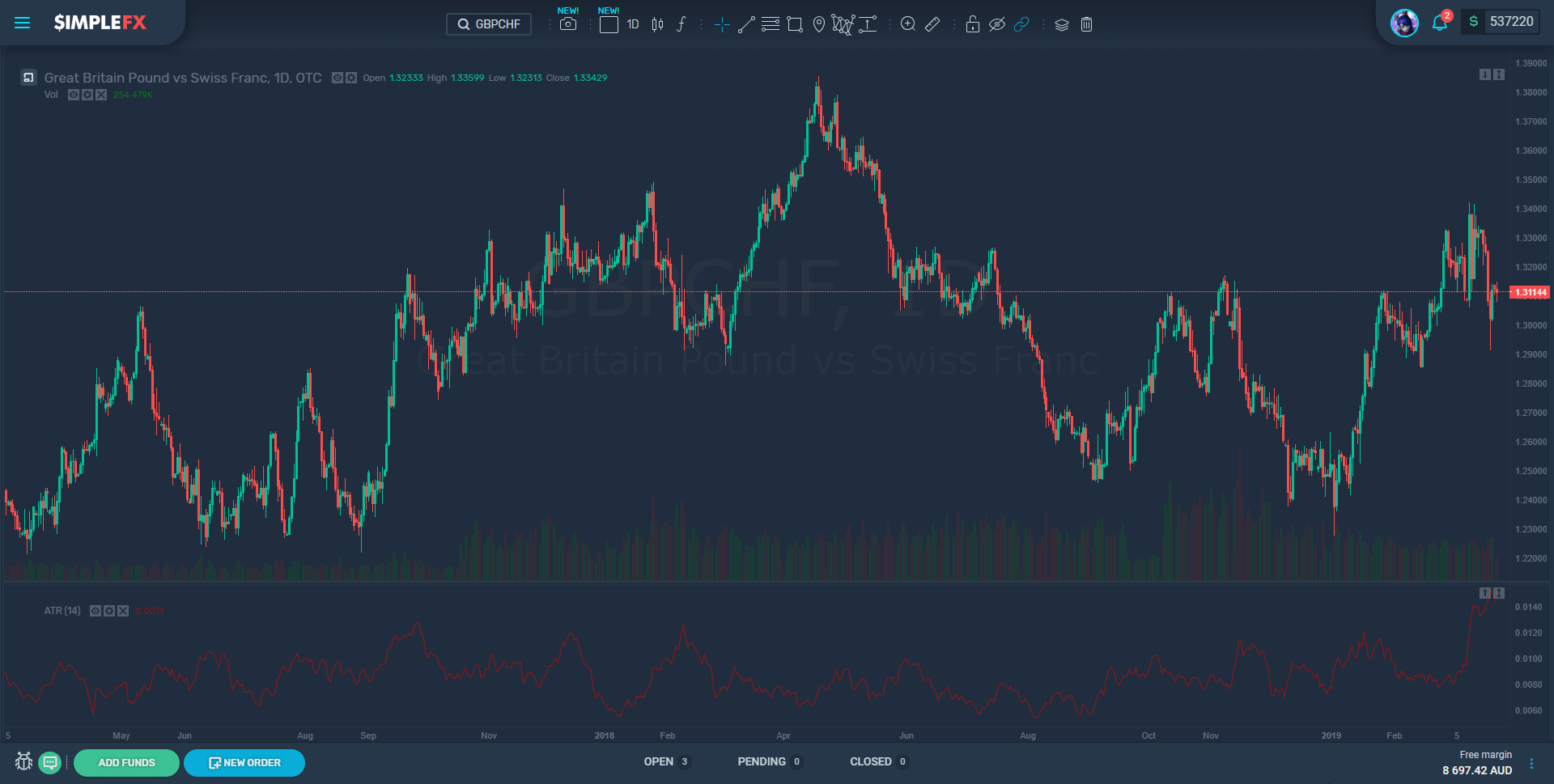 As you can see GBPCHF trends strongly and show almost no consolidations. It’s volatile with a proven record of no crazy unexpected moves that would blow your position up. 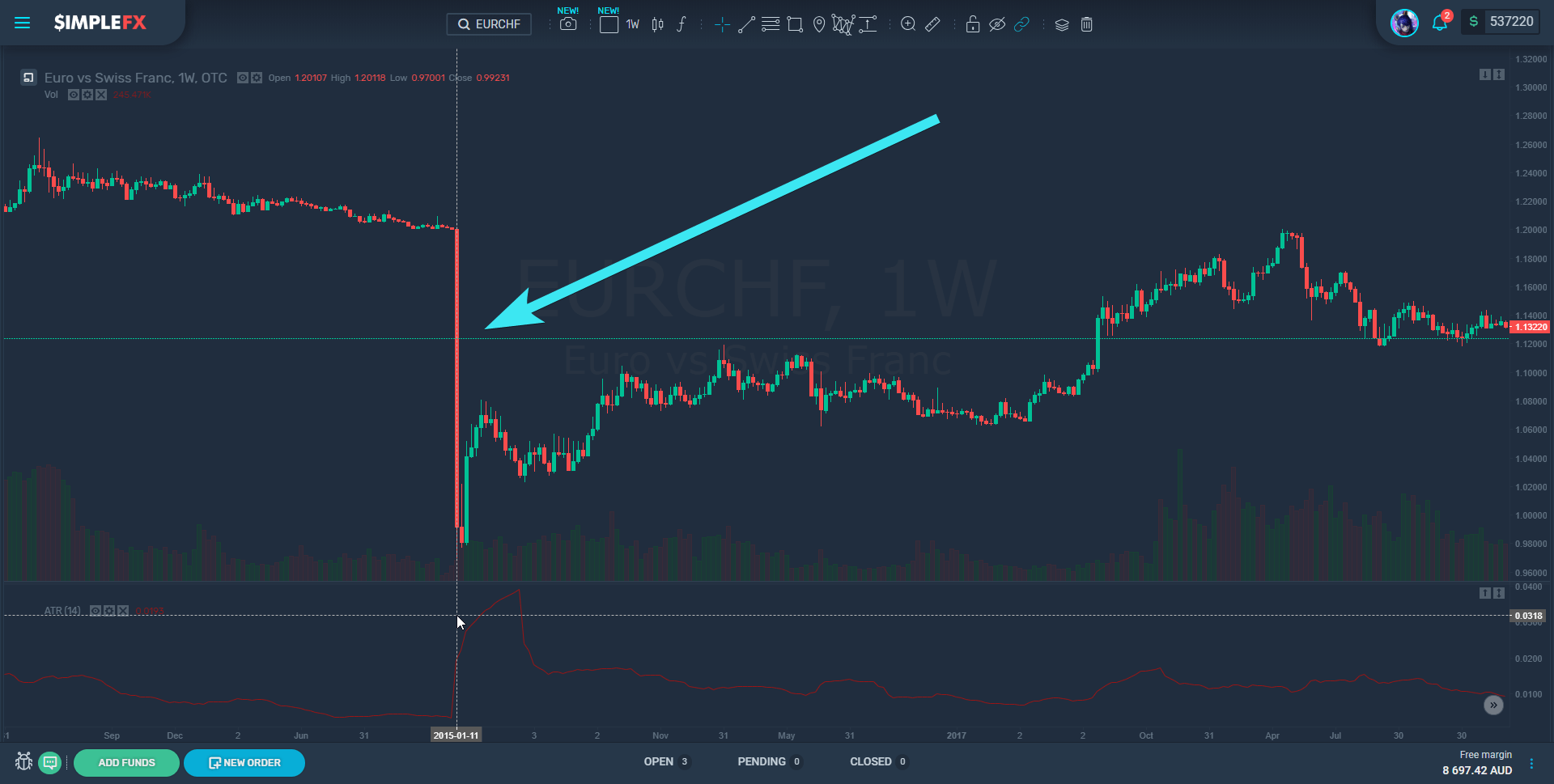 EURCHF used to be untradeable due to the Swiss franc being pegged to euro. You can see when it was finally released.