Outlook: We get the JOLTS report today to bolster the vibrant employment picture. Then on Wednesday it’s CPI and perhaps a return to inflation worries and more studies about what prices are transitory and which are structural.

The question going forward is what it takes to get to the Fed’s criteria of "substantial further progress”? We have an intuitive answer–three additional months of blockbuster jobs reports that whittle down the jobs lost to the pandemic from 8.702 million to 6+ million. That could be payrolls in Aug, Sept and Oct, the latter arriving the first Friday of November. See the chart. Unemployment has not been below 5 million since Feb 1974! It’s unrealistic to expect more progress than 6 million. 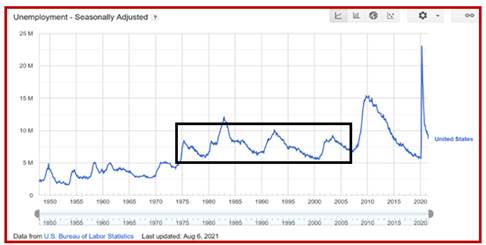 And just as surely, the bond and other markets are going to believe the tapering whisper before the end of this year. Tapering, however, is not the same thing as raising rates. Various yields may go up on market action, but the only real Event is the actual first Fed funds rate hike. That can, indeed, be put off to 2023 (although 2024 looks like a stretch).

Meanwhile, two clouds hang over the global economy–the Delta cloud, as the FT puts it, causing distress today on the draconian shut-downs in China (and Australia). The other is the climate cloud, with scientific outfits including the UN all yelling red danger and the average Joe starting to understand the scientists are right, given wildfires in the US West and flooding in Europe and China. So far the consensus view has been that these setbacks are a bump in the road, not a concrete barrier, but humans are capable of inventing panic at any time, with or without warning.

The Goldman downgrade of its Chinese growth forecast is stunning–the FT reports the q/q forecast for Q3 was lowered to 2.3% from 5.8%. Yikes! “The bank assumes the Chinese government will bring the virus under control in about a month, despite seven districts currently labelled as high-risk and more than 191 as mid-risk over the past two weeks. While analysts expect growth in the fourth quarter to benefit from both activity normalisation and policy support after the latest outbreak, full-year growth will be “modestly lower” at 8.3 per cent, from its earlier expectations of 8.6 per cent.” This is probably a good model for the world, despite the world have a far lower vaccination rate.

We have two worries today. First is that the dollar rallyette on payrolls will fade away and by more than the usual Tuesday pullback. This can happen because of Delta or some other excuse. The second is that we are altogether too reliant on Asia in general and China in particular, and not just for microchips. We are still reliant on these countries for vast amounts of consumer goods, from socks to TV’s. Rebuilding industries in the US to replace these suppliers is the job of years, and that’s assuming it can be done at all under current conditions. Maybe not with average US wages already more than Asian wages and going up. The US is not alone. Germany relies on China to buy manufacturing equipment. Europe depends on Germany to make those exports.

That’s the immediate future. Longer run, failure to vaccinate the third world is going to come back and bite on the rear. While we are reading the Jolts tea leaves, a new Delta panic is always possible. Keep your eyes peeled.