Recent French economic data were better than expected after February inflation preliminary report: manufacturing sector expansion picked up pace in February with services sector also recording an expansion following a contraction in January, and retail sales in January rose 2.3% over year after 1.2% increase in December. At the same time consumer inflation edged up: headline inflation ticked up to 1.3% in February from 1.2% the previous month. Positive French data are bullish for FR40. 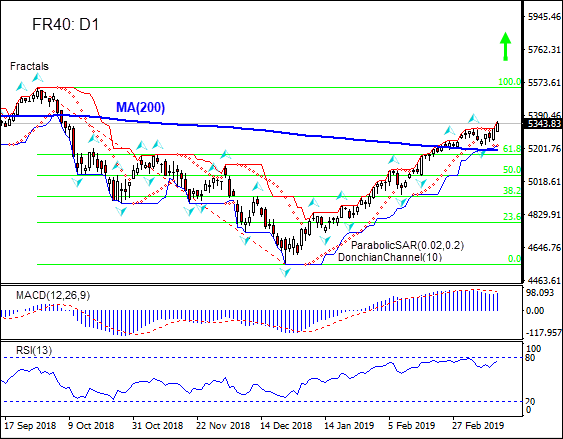 On the daily timeframe FR40: D1 is retracing higher after hitting 27-month low in the end of December 2018, and has risen above the 200-day moving average MA(200). The price is rising after breaching above the Fibonacci 61.8 level. These are bullish developments.

We believe the bullish momentum will continue after the price breaches above the upper Donchian boundary at 5357.37. This level can be used as an entry point for placing a pending order to buy. The stop loss can be placed below the lower fractal at 5219.87. After placing the pending order the stop loss is to be moved every day to the next fractal low, following Parabolic signals. Thus, we are changing the expected profit/loss ratio to the breakeven point. If the price meets the stop-loss level (5219.87) without reaching the order (5357.37) we recommend cancelling the order: the market sustains internal changes which were not taken into account.

EUR/USD is pressured under 1.09 ahead of German IFO data

EUR/USD is trading below 1.09 as ongoing SIno-American tensions boost the safe-haven US dollar. The German IFO figures for May are set to show a rebound from the lows. Coronavirus figures in Europe are declining.