Germany’s economy returned to growth in the first three months of 2019. Will the DE30 stock index continue advancing?

German data lately were positive on balance: contraction in manufacturing sector slowed while the services sector expansion accelerated in April, the trade surplus grew more than forecast in March, industrial production grew in March when a decline was expected, and German economy recorded a 0.4% growth in the first quarter after stagnant fourth quarter in 2018. On the other hand retail sales declined in March, and economic sentiment for May deteriorated according to ZEW report. Improving economic growth is bullish for Germany’s stock market index. 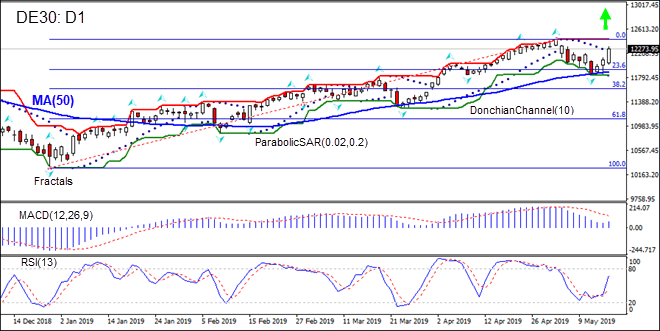 On the daily timeframe DE30: D1 is rising after bouncing off 50-day moving average MA(50).

We believe the bullish momentum will continue as the price breaches above the upper boundary of Donchian channel after rising above previous day high at 12317.95 . This level can be used as an entry point for placing a pending order to buy. The stop loss can be placed below the lower Donchian boundary at 11836.62. After placing the order, the stop loss is to be moved every day to the next fractal low, following Parabolic signals. Thus, we are changing the expected profit/loss ratio to the breakeven point. If the price meets the stop loss level (11836.62) without reaching the order (12317.95), we recommend cancelling the order: the market has undergone internal changes which were not taken into account.