The U.S. dollar closed higher yesterday on the back of the President Trump's tax reforms hearing advancing in the senate. Investors are hopeful that the tax reform plans could soon be implemented after the bill moved to the senate. Elsewhere, Fed nominee Jerome Powell's confirmation hearing got underway. The potential candidate indicated his preference for normalization of interest rates and maintaining that the Fed's balance sheet unwinding program.

On the economic front, data yesterday saw Japan's retail sales declining 0.2% on the year which was below estimates of a 0.1% and posted declines following a 2.3% increase previously.

Looking ahead, the U.S. second revised estimates for the third quarter GDP will be released. Economists polled expect the GDP to be revised higher to 3.3% for the quarter, slightly higher than the preliminary estimates of 3.0%.

The Fed chair, Janet Yellen is expected to testify to the Joint Economic Committee in Washington today. 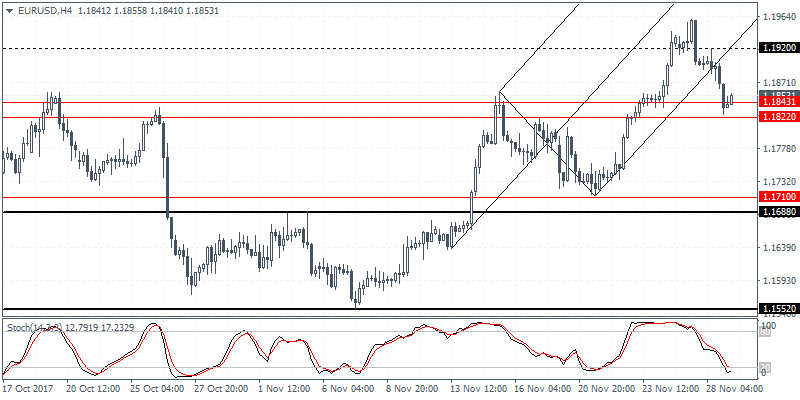 EURUSD (1.1853): The euro extended declines for a second consecutive day following the brief rally towards the 1.1950 handle. Price action is likely to remain trading within the band of 1.1950 resistance and 1.1700 support in the near term. In the short term, EURUSD is expected to see some modest upside towards 1.1920 where a retest of the breakout from the rising median line will signal further declines. If the current support fails, then EURUSD could be seen correcting towards 1.1710 level after retesting resistance level. Alternately, in the event that the currency pair manages to breakout above 1.1920 then we expect to see further gains coming which could see the euro retesting the 1.2000 handle. 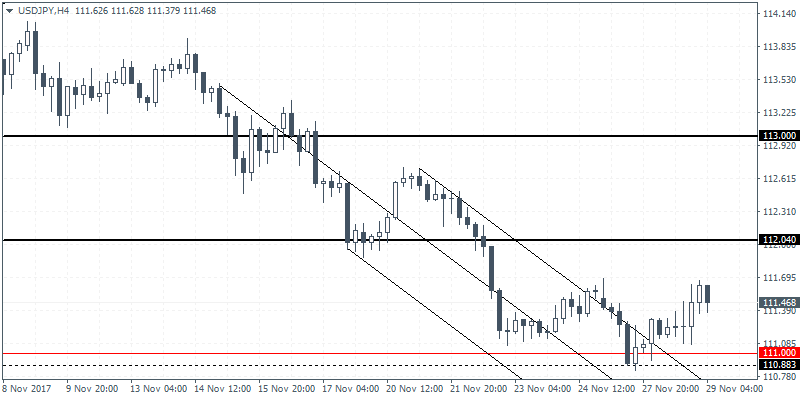 USDJPY (111.46): The USDJPY looks to have stalled in its declines above the 110.70 support level. However, the downside bias remains as we expect to see a firm test of support at this level. On the 4-hour chart, USDJPY has managed to post a bounce off the support region near 111.00 - 110.88 level. As long as this support level holds, USDJPY could remain range bound in the short term. Resistance level formed at 112.00 will be most likely tested but further gains are unlikely. The currency pair will have to form a higher low in order to confirm further upside. Above 112.00 the next main target for USDJPY will be the 113.00 handle.. 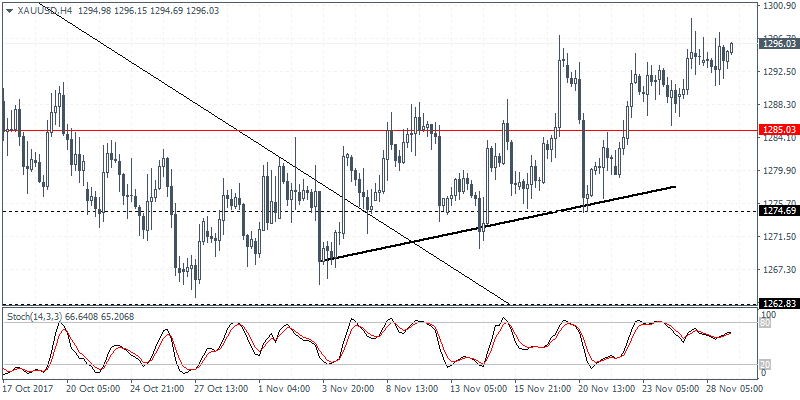 XAUUSD (1296.03): Gold prices have managed to maintain the upside moment despite some flat price action. Currently trading near the 1295 - 1296 level, gold prices are expected to see further gains pushing price towards the 1300 - 1304 level where resistance has been established. This could see a short term decline in price action as gold prices maintain a new sideways range within 1304 and 1285 level. The unfolding price action and the expected rally towards the 1304 level also signals a potential cup and handle pattern that could form. However, further evidence of this is required as we wait for a retracement off the 1304 resistance ahead of the pullback.