Enthusiasm over a possible Brexit deal last week, after EU Barnier and UK Raab, agreed on non-stop talks to achieve a deal by November, was wipe out by UK government's advice papers on how to deal with a hard Brexit. The Pound gained some ground lately purely on USD weakness, this last, a result of a better market mood amid easing global trade tensions.  Pound gains, however, have been quite shallow when compared to other high-yielding currencies, as a looming divorce seems poised to end in the bad way… for the UK.

Ever since the Brexit referendum, back in June 2016, sentiment fluctuations over how tough or not the outcome of the separation from the EU would be, where the main market motor of the Sterling, an even BOE´s decisions have been analyzed through the Brexit lens. After the UK government put itself together PM May gave the EU the official notice of the departure on March 29, 2017. Under Article 50 of the Lisbon Treaty, that means that the UK has up to March 29, 2019, to clinch a deal with the EU. 24 months, with 16 already gone and just 8 ahead. Most of the withdrawal document, around an 80% of it, has been long ago agreed. But negotiations have been stuck for months around the future trade relationship between both economies, and the Northern Irish border issue, where a hard border seems inevitable.

UK proposals to solve these problems have been rejected by EU members, which envisage that the UK wants to hold on to the benefits of belonging to the Union, without the related obligations. UK representatives blame the EU for the lack of progress, but EU Chief Negotiator Barnier said that the blueprint of May's backstop plans is not feasible. He urged the kingdom to be more realistic, adding Brussels will not be intimidated by a "blame game." Also this week, UK Trade Minister Liam Fox says the government does not want a no-deal Brexit, adding that the government would still walk away from negotiations if they don't get a good deal.

As the clock ticks to the end date, a solution seems more elusive. In the meantime, the UK Governments keeps preparing for a hard landing. Theresa May said this week that a no-deal Brexit is not "the end of the world." The statement seems a last-ditch effort to prevent investors from falling into panic rather than a confidence vote on local economic strength.

Adding fuel to the fire, Carney's mandate as BOE's head has been on tap. Carney came to the BOE in 2013 and planned to stay for four years. In the post-Brexit referendum era, he agreed to extend his tenure up to June 2019, to provide continuity through the Brexit negotiations. But an extension of that period seems unlikely and a change in the BOE will add uncertainty.

1,000 pips seem quite a huge bet at this point, but take a look at what the weekly chart is saying: the GBP/USD pair broke last week below the 61.8% retracement of the post-Brexit slump recovery, from 1.1946 to 1.4375. The pair broke below the level early August, and ever since has been unable to surpass it. The longer the pair remains below it, the more discouraged bulls will be with the potential of a 100% retracement increasing exponentially. 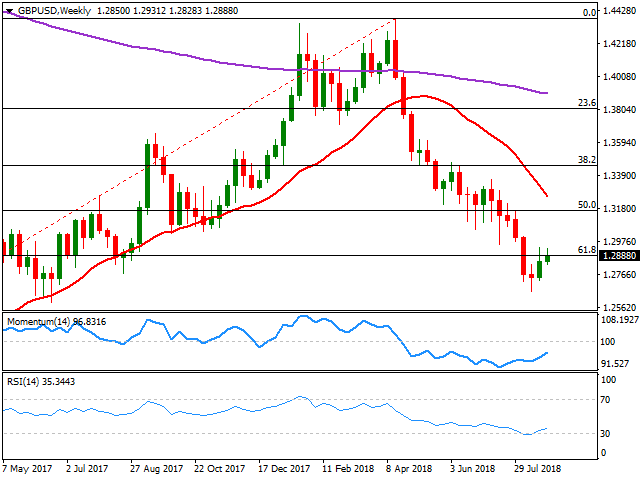