This is a continuation of the previous article, which was shared on talk markets, fxstreet, and other channels. The time for a gold spike has passed, and gold prices have not broken the inflection point of $1,931. However, the diverged cycle low of $1,680 stays, and the area has become a tricky spot for buyers. This article will present the strong cases for gold prices and take you to the next level of the forecast, which was set in March 2021.

The long-term outlook for the US dollar remains bearish, with another decline expected. The chart below depicts the 40-year curve, which indicates that the index must fall in the coming years. This chart has a significant impact on the long-term patterns of the index. 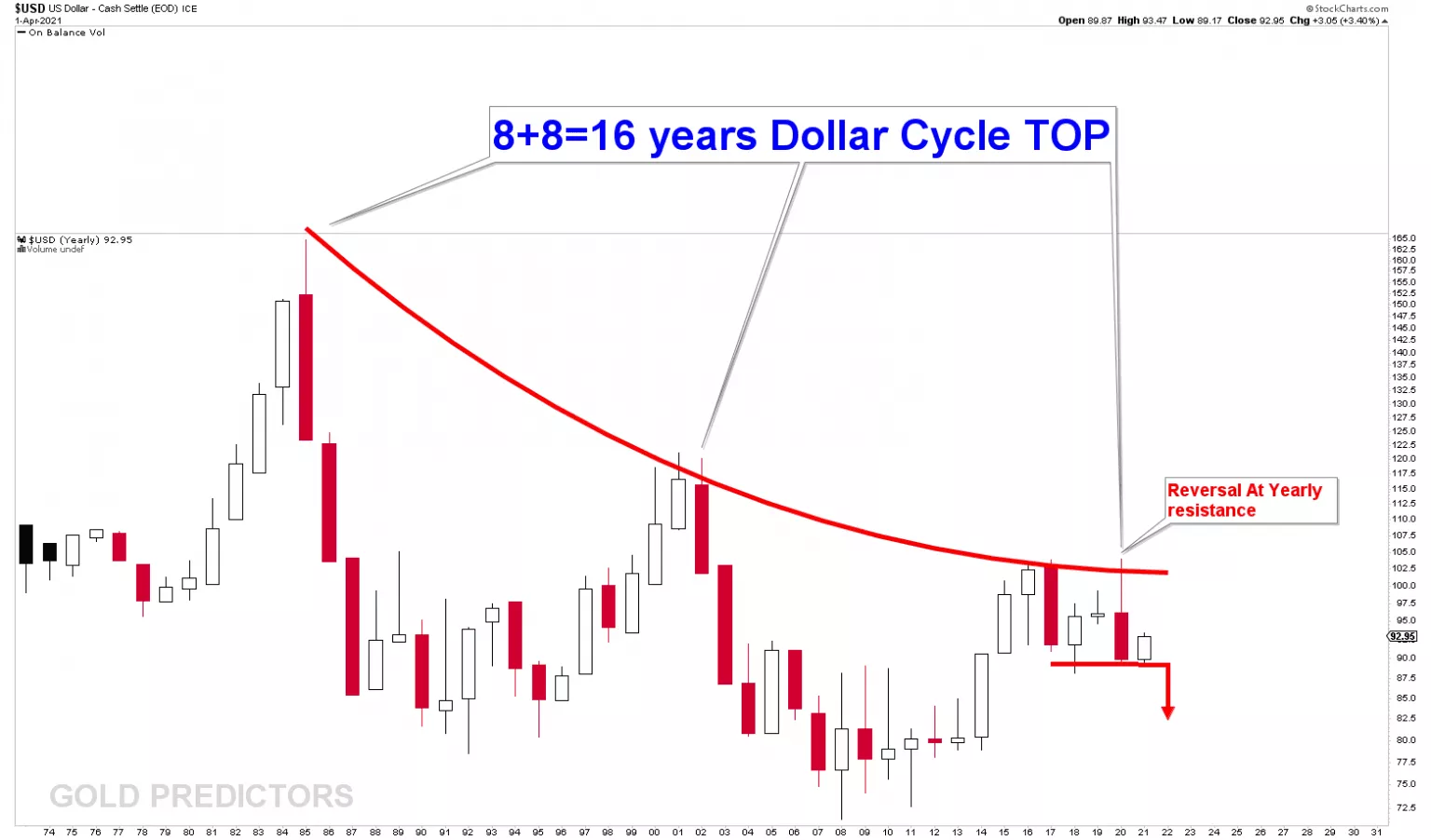 Another chart depicts the declining patterns of the US dollar index. The chart shows that the index has been trapped between the falling trend lines. Once the index breaks down, it must hit the lower support at 80-82.

We have been correct in our anticipation of higher inflation in 2021. The consumer price index (CPI) increased by 5.39% (YoY) in September, matching the level seen in June 2021, indicating that inflation is becoming more persistent. The core CPI was lower at 4.04% due to sharp price increases in food and energy. Another source of concern is shelter, which accounts for 32.5% of the overall CPI index. The CPI for shelter increased by 3.15% (YoY) in September, but the index tends to lag actual home price increases. We anticipate long-term CPI inflation of more than 5%, with the possibility of a spike to 10% due to rising energy prices, supply chain disruptions, imported inflation from China, and strong growth in home prices fueled by low mortgage rates.

Despite the strong fundamentals, gold prices have been fluctuating in a wide range, with no change in value over the last year. The primary technical reason for this sideways movement is 40-year resistance. The price has reached a significant 40-year resistance line in the $2,000-$2,100 range, where a pullback was expected. Since January 2021, we have been anticipating a maximum pullback in the $1,700 region.

During the month of February, we calculated the 10th of March 2020 as the big turn time. The levels from where the turn was expected were $1,675-$1,680. The reason for marking 10th march as the turn time was the diverged cycle. On other hand, the level of $1,680 was calculated as the yearly inflection. On March 10, 2021, the price reached a low of $1,676 before rising to $2,000 again. We’ve been debating the significance of $1,765, $1,725, and $1,680 as the major levels as a result of our machine learning model’s calculation and prediction. These levels have truly emerged as the major levels, with a strong magnetism effect on the price. The magnetism effect on these levels can be observed by drawing lines on these levels.

Things are changing now as time passes. Last month, we predicted a drop from $1,835 to $1,700-$1,725 followed by a rally back above. The drop reached $1,722 before bouncing back to $1,800. The big question now is whether this drop to $1,722 was the last one before a rally back to $2,100, or if another drop is in store. This topic is covered in the latest premium article for our premium members. This topic is well covered for premium members. Let’s look at some scenarios in which gold could change direction in the coming weeks and months.

The chart below shows an ascending broadening pattern. We created this chart when the price was $2,000 in January 2021, as we were the first to identify the possibility of this pattern. The ascending broadening eventually becomes the primary pattern of the move on medium-term, and the decision will be soon. As per the patterns, the lower angle of support is $1,700-$1,725 (again) and the inflection point is $1,680 (again). As stated in the premium update, a turn in both metals is expected in October/November due to the emergence of medium-term cycles. Price is attempting to battle the levels of $1,835 and $1,700 in order to produce the next move. If the monthly closing price of $1,931 is breached, the next leg higher to $2,100 and $2,300 will begin. 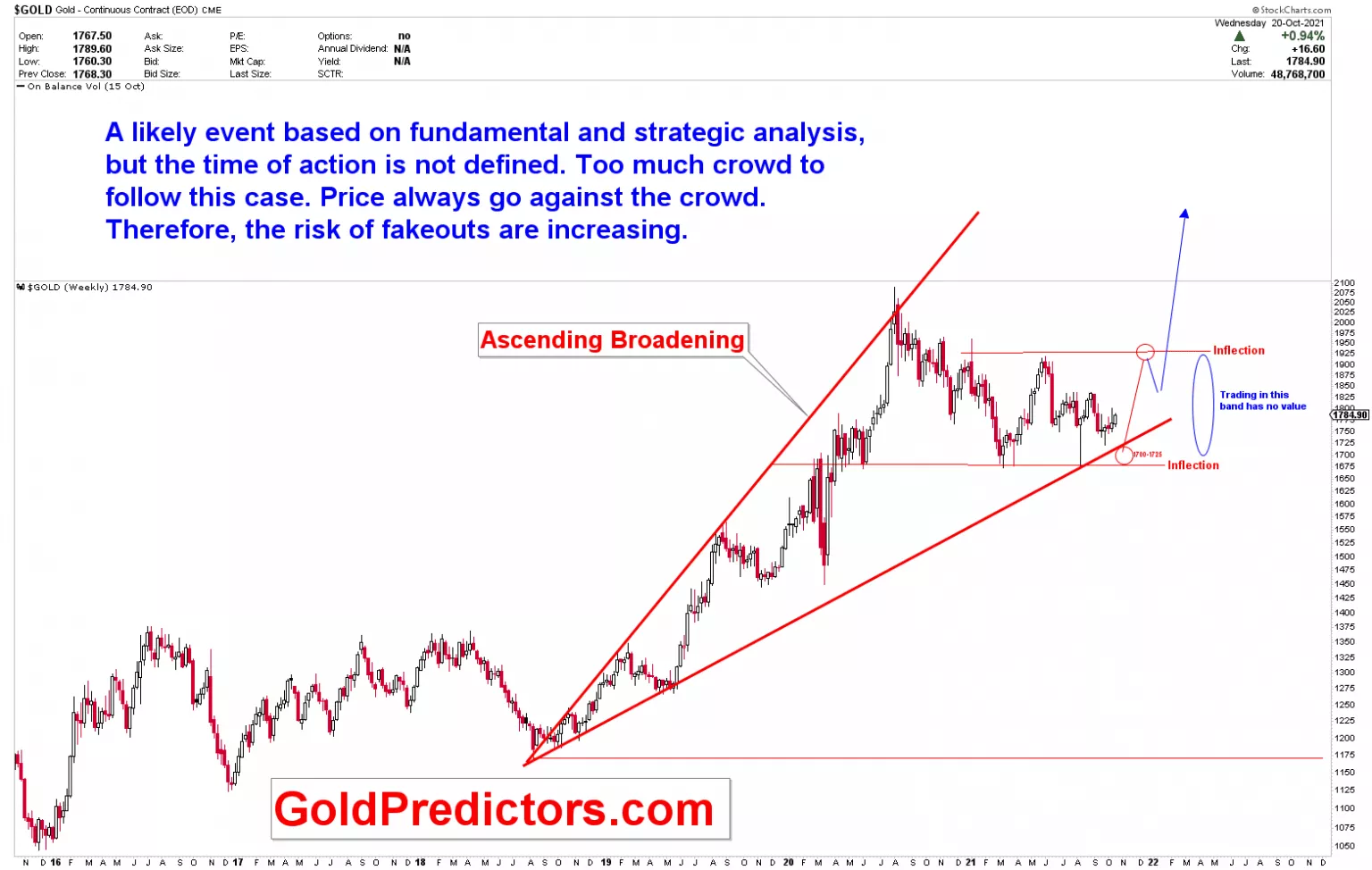 Case 2 – Gold Prices are about to crash

There is no doubt that a big crowd of gold and silver is waiting for the $2,300 move. One thing to remember is that prices do not follow the crowd. The price is always at risk with the crowd. There is no doubt that strong fundamentals are pointing to gold reaching $2,300 and silver reaching $50. However, keep in mind that the best rule to follow is the price actions. Just do what the price tells you to do, not what the crowd tells you to do. At the moment, there is no price decision, and price can move in any direction.

A clear breakout above $1,931 could propel gold to much higher levels, while a break and monthly close below $1,680 could shatter the patterns that have formed over the last year. This is currently unfavorable, but it is still very possible. Ascending broadening patterns have a $1,200 target. If this case is valid then prices might continue to decline until March/April 2022 and then a strong rally. 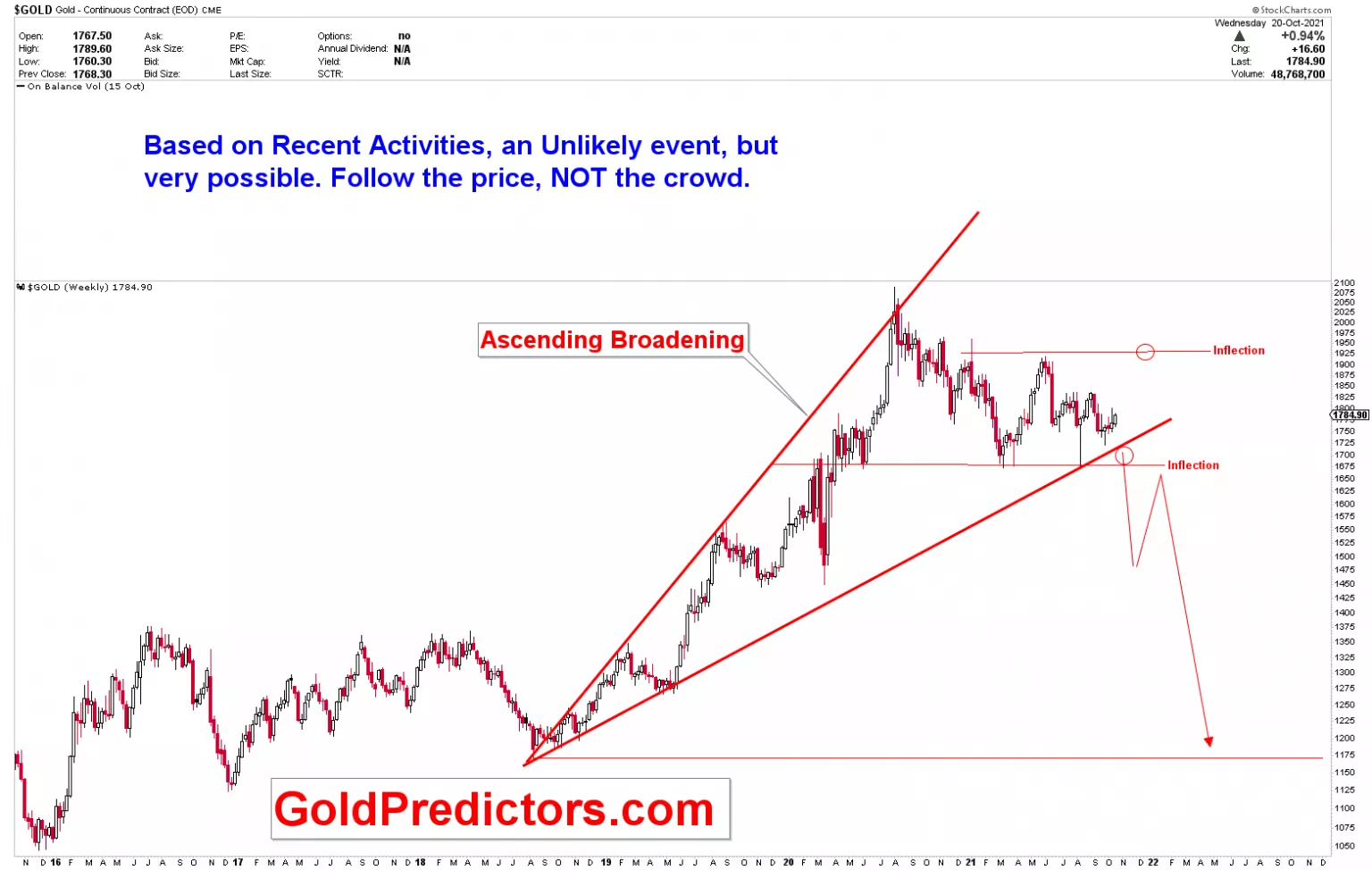 Which case has the highest probability? 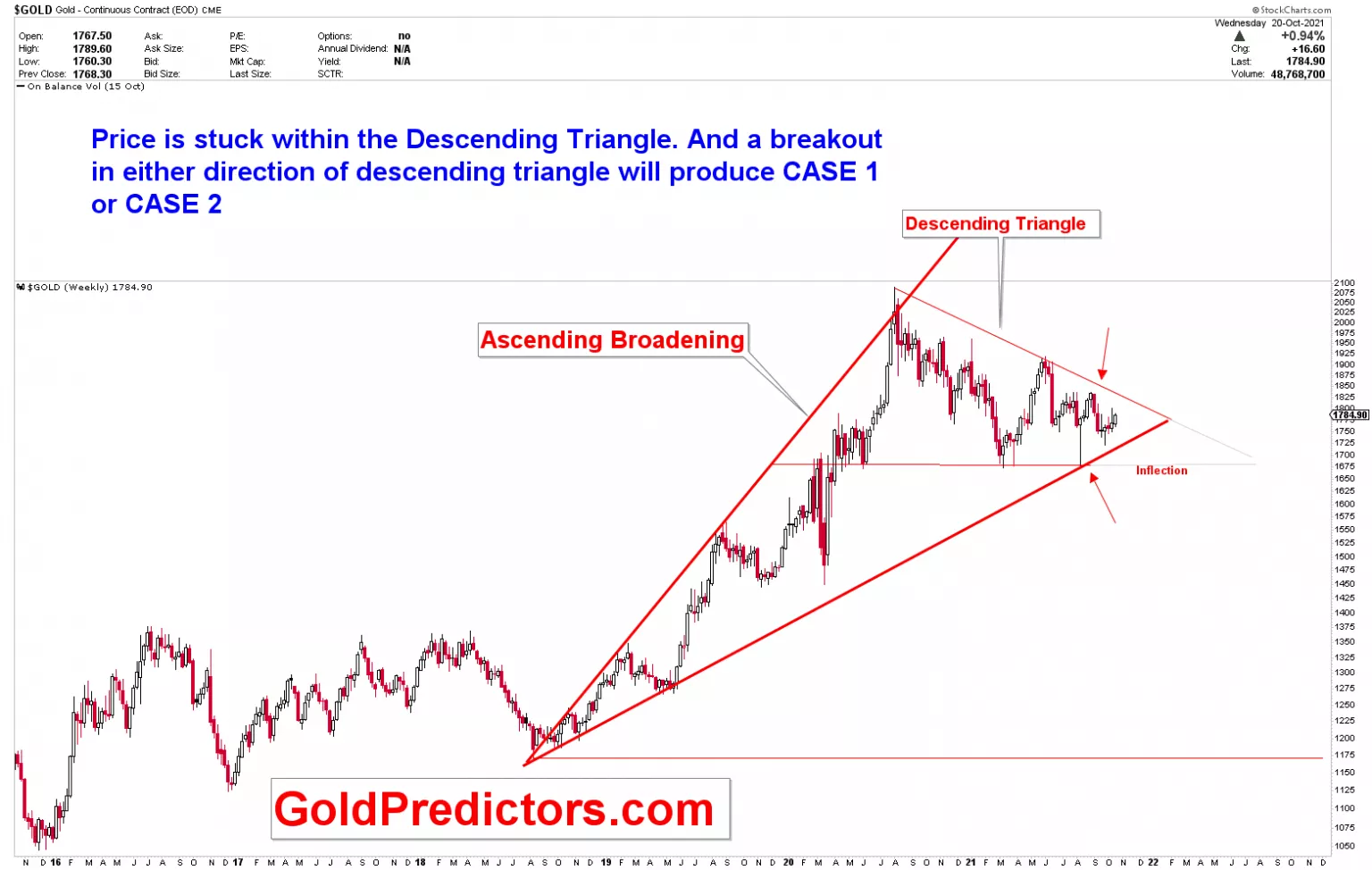 Gold is currently trading within the limits of the ascending broadening and descending triangles. A price break in either direction could propel gold to the next level. Gold prices benefit from high inflation, a falling dollar in real terms, low long-term Treasury yields, and negative real interest rates. These factors have a long-term impact. However, the short-term directions may take some time to implement. Premium articles discuss short-term trends as well as how to trade gold and silver.