We are ending the summer period. Fast wasn’t it. We’ll get back to normal posts in September.

We’ll soon be thinking of 2020. One of the important aspects in 2020 will be the Mutation conjunction of Jupiter and Saturn. In olden days these were the business planets. What is coming up in 2020 is the first conjunction in Aquarius. The mutation conjunction is 240 years apart with some adjustments, I have written about this before and will again. This should come with many new technologies and technological ideas. So many in fact that the way the world works may change. Think things like 5G and bitcoins / crypto-currencies. This could be a depressive environment as people try and adjust to the many changes. One of possible interest is technology as applied to farming.

The following chart shows the geocentric Bradley indicator. It’s the red line on the daily chart of the SP500. You can search the blog to find my description of the Bradley and why we should ignore the apparent trend. It’s not accurate.

What is quite accurate is the changes in trend. I’ve been waiting for August 23 and now watch the price fall. I have circled that date in blue. Note the upcoming dates (blue circles). These are all potential turns dates but ignore the direction of the red line. Give each occurrence of +- 3 tds.

I’ll make a call each time we get close to one of the dates. 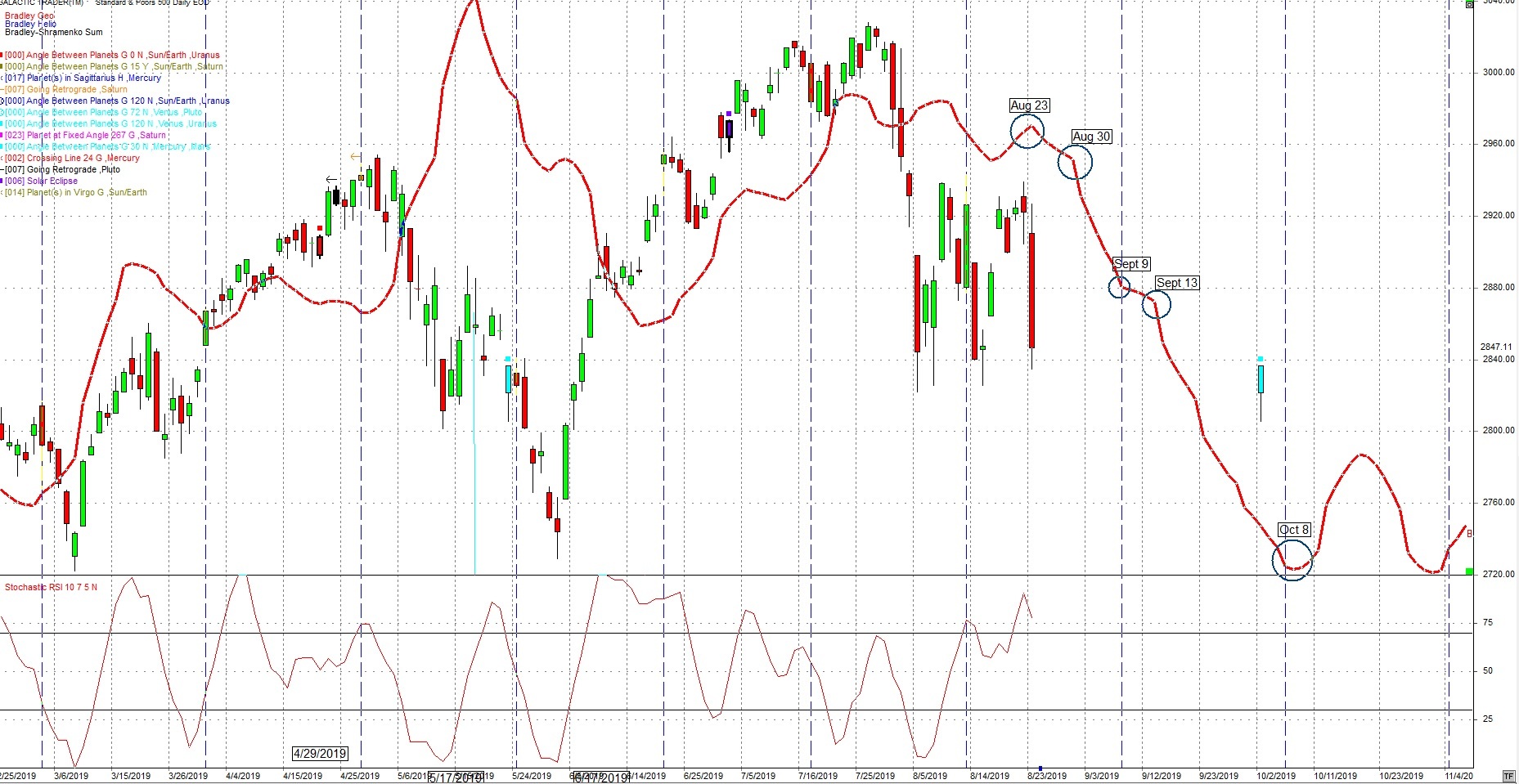 On August 18 Mars entered Virgo. This often equates to powerful market moves. We have covered Mars changing signs in some detail. Following is a daily chart of the SP500 and the red squares show when Mars entered a new sign. 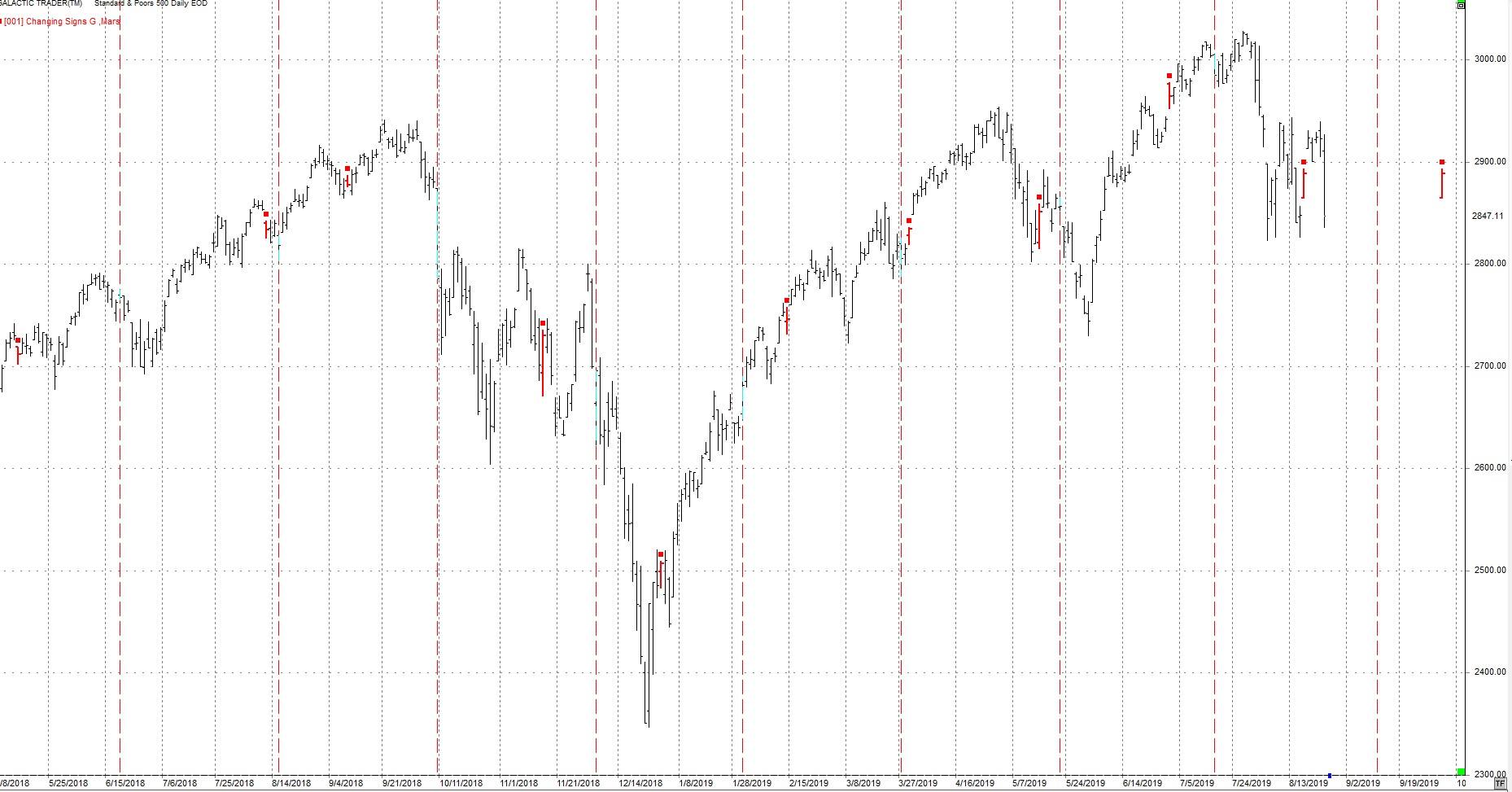 Specifically, when Mars enters Virgo the markets have a history of sharp moves both up and down. where there is a number of red x’s.

Looking at the above I would say the markets may move lower, possibly to the end of the month or early September. Aug 12 and Aug 19 may both be powerful moves in the markets.

With so many powerful aspects it is difficult to pick one date. The forces of the aspects overlap. It should however, be very volatile where one can make money or lose money fast. I expect a sharp 3 day sell-off.

We may get another war but I'm looking at September 9, 2020 and beyond for a major war effort. That day Mars turns retrograde while squaring the conjunction of Saturn / Pluto.

We are entering the 12th week of a new Primary cycle which started on June 3, 2019. In the current situation I am looking for a crest of the 9 week cycle which may have already had on July 26. This would be the ½ Primary cycle crest and down.

Looking at the above summary, I would say the markets may move lower possibly to the end of the month or early September. It is possible we continue down into late Sept / early October.

The potent Sun/ Mars conjunction will be in orb from now until the end of September. This conjunction has a record of stock market reversals.

Following is an up to date chart of the SP500. I am looking at a low in late August or early September. This may change as aspects unfold in August.

Much of the market’s movement will be due to the extent of the trade wars between China and the US. 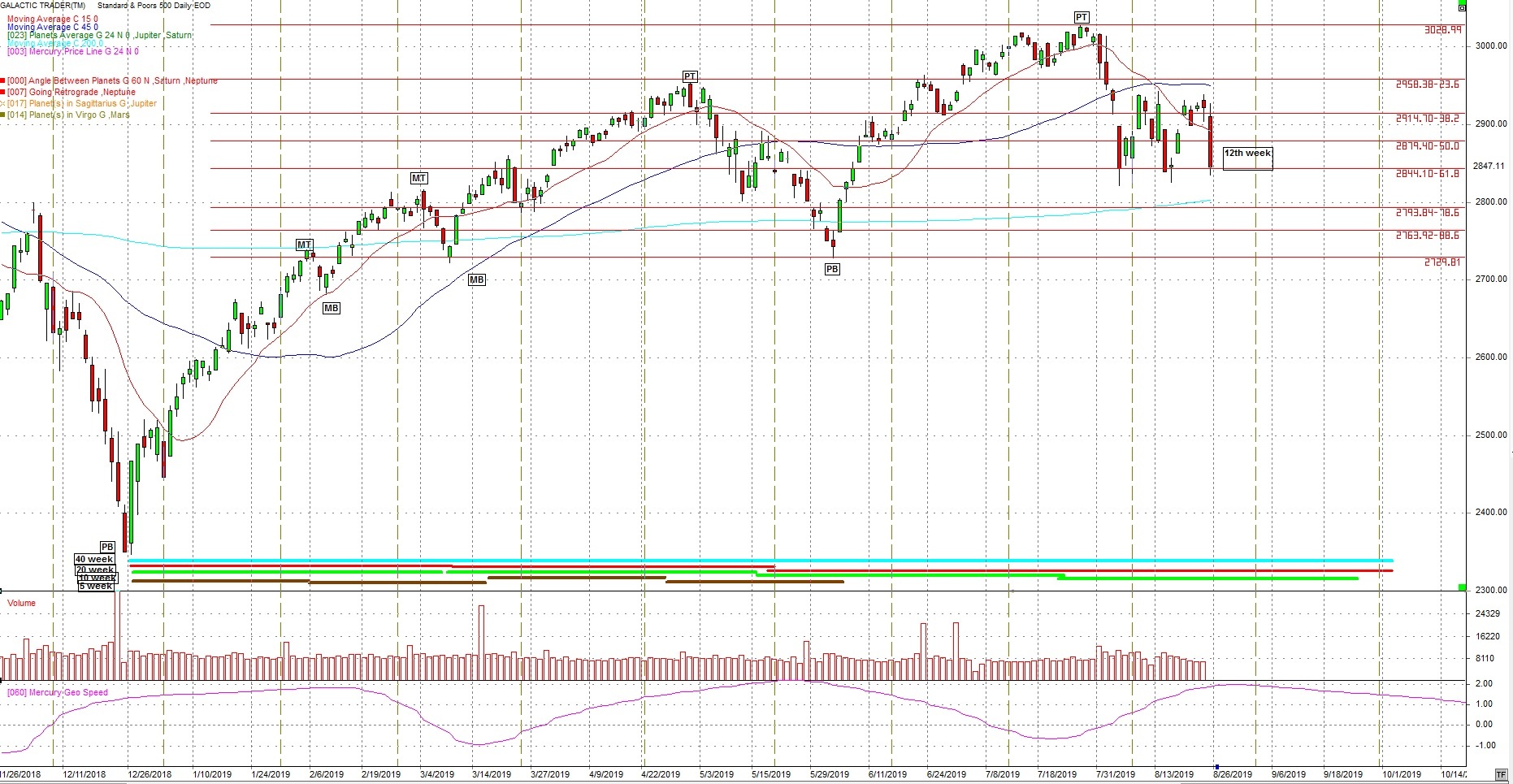 Jupiter square Neptune which we have mentioned numerous times may be the real problem as these planets in aspect can be quite inflationary. This may be pointing to serious financial problems late 2019 or early on 2020.

The Jupiter / Neptune square is still in scope and the effects are still being felt.  The next square is Sept 21. The Saturn / Pluto conjunction is also still in orb. Both will come back to exact conjunction.

The Jupiter going Direct signature on Aug 11 is often associated with crests in gold prices..

“We may be headed down but also watch for a big range day.”

When commodities are moving with such strength it is difficult to see a turn. 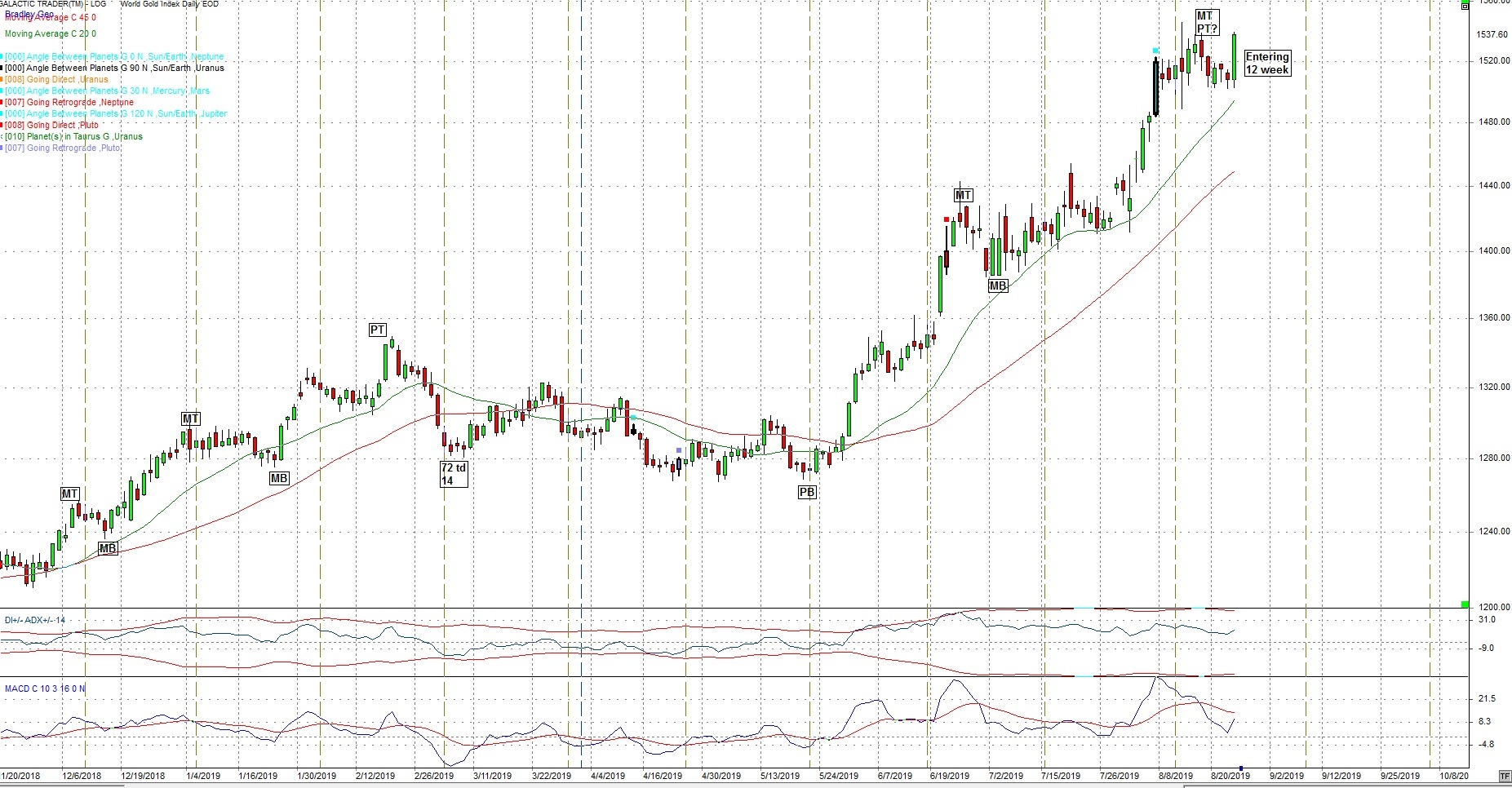 Aug 23 may have been that big range day.

Aug 26 has Venus in waxing trine to Uranus.. This is a very volatile aspect.

Aug 28 has Mars trine Uranus often seen at crests in Gold. This could be very volatile for Gold over a number of days. Watch out for a pull back in Gold.

The red squares on the following daily Gold chart show the exact square of Jupiter and Neptune. There are 3 of them. Based on the previous 2 we may see a move up then down. 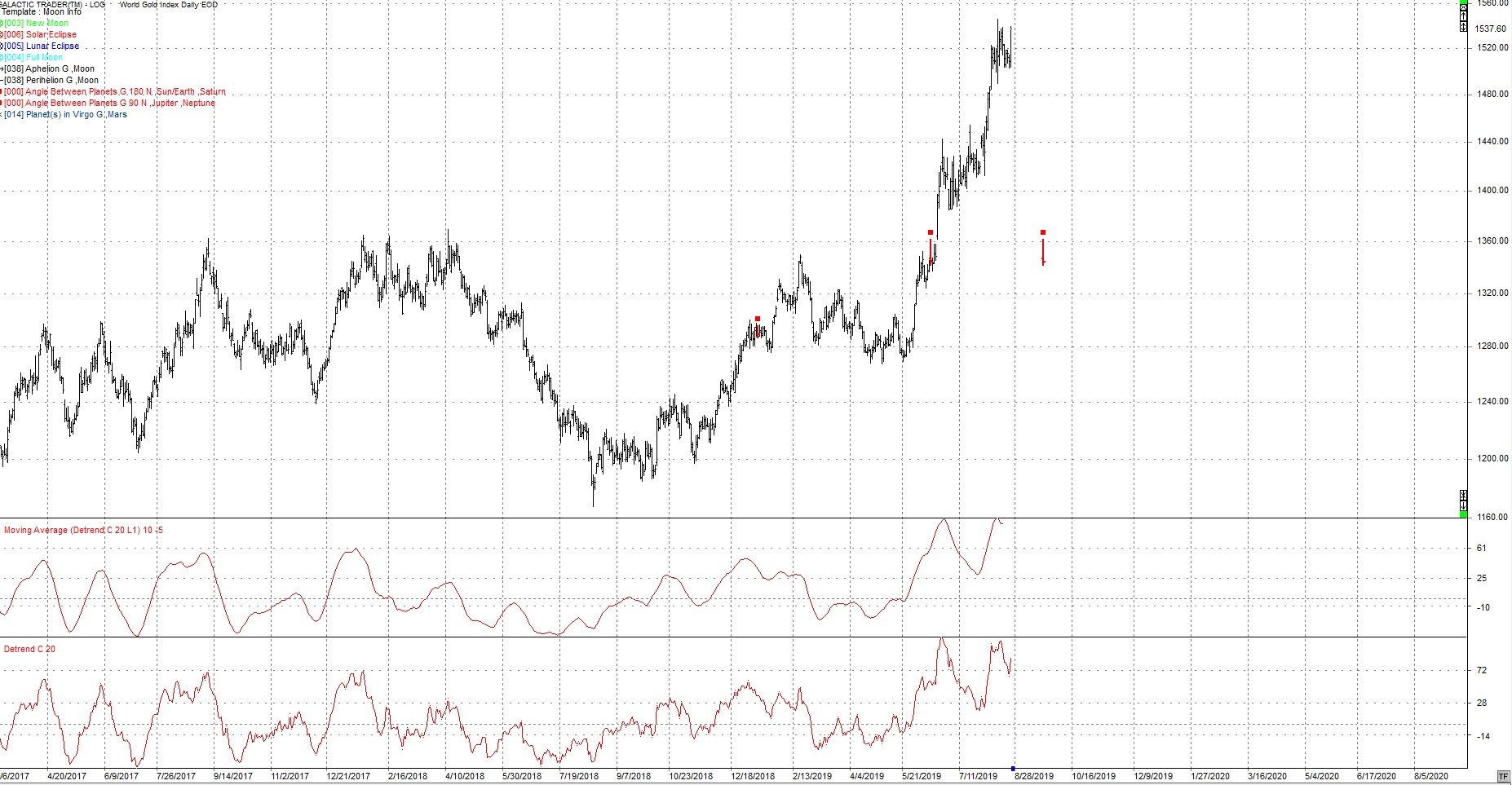 I’m looking for crude to find support at the May and June resistance areas. This assumes crude price moves below the boundary of the symmetrical triangle (green).

Crude may be quite volatile over the summer months and into the late summer (i.e. Sept 21, 2019). Obviously, the price of crude will go up if relations with Iran worsen. I’m expecting a rise in crude oil price by the fall timeframe.

Will China buy crude from Iran?

The red squares are the Jupiter / Neptune square. The next instance is the square forming on Sept 21. 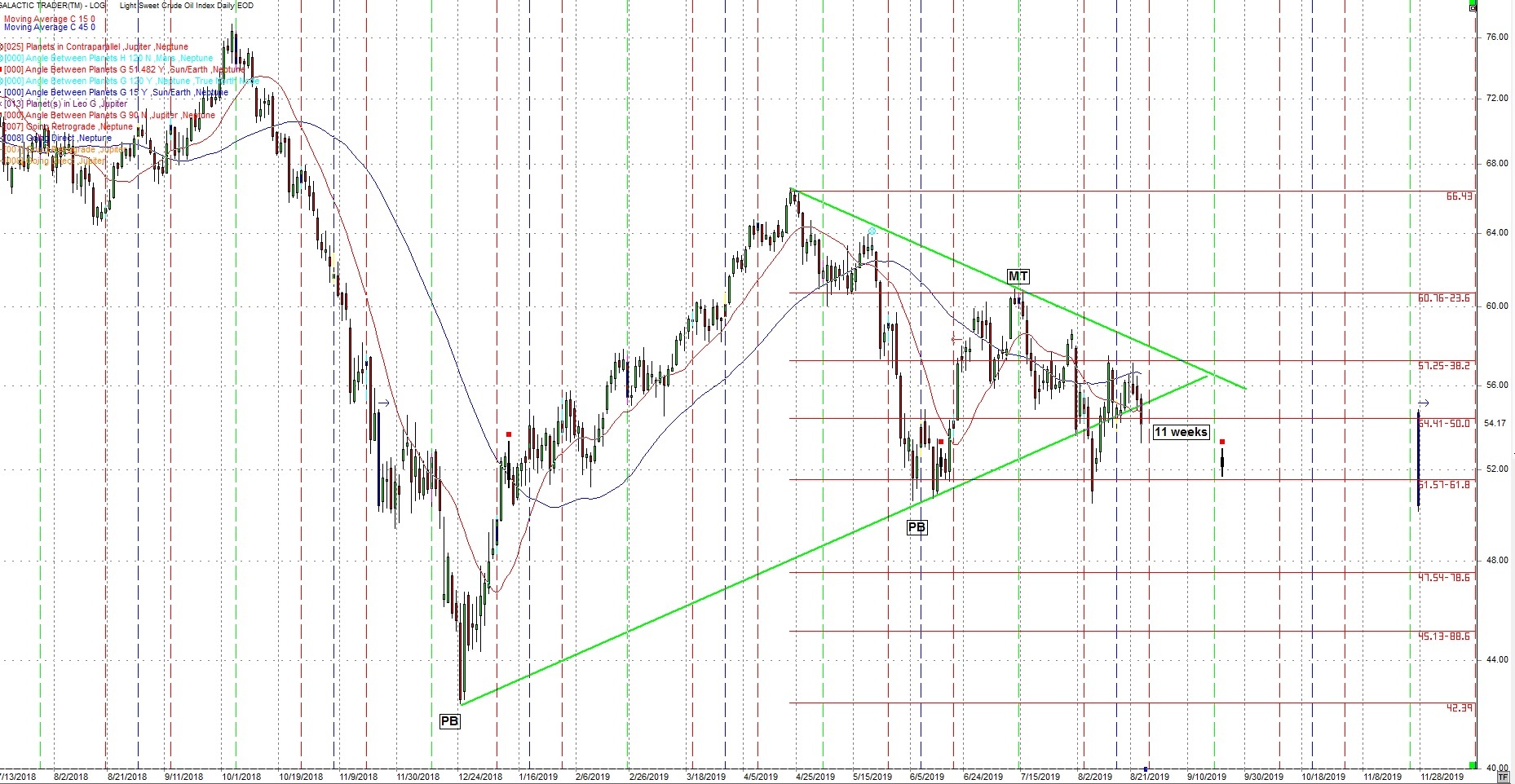