This follows along from last week.

The change is due to a chart I saw some time ago. I believe this was from Bill Meridian. It shows a Mars, Vesta conjunction approximately every 3.9 years. 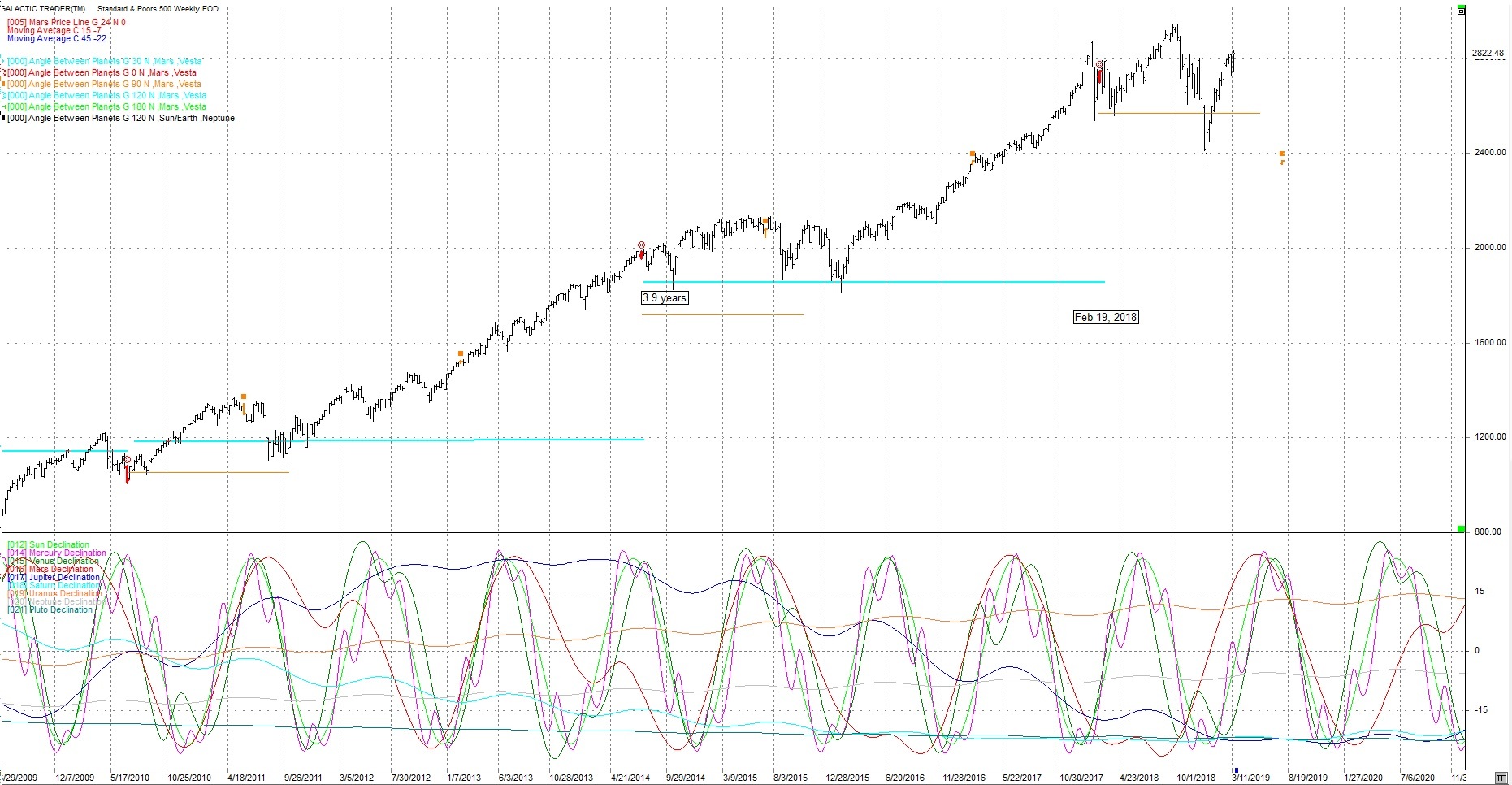 Volatility should continue although probably moving down after this coming week. Longer term I’m expecting bigger moves and changes from 2020 through 2023.

Jupiter square Neptune which we have mentioned numerous times may be the real problem as these planets in aspect can be quite inflationary. There are also large debt problems in many countries, companies and individuals. One of the reasons I’m looking at Gold here is Inflation coupled with the above debt problems. This may be pointing to serious financial problems late 2019 or 2020.

We are in week 16th week of the Primary cycle.

The Price moving averages, the 15 day sma is just under price and above the 45 day sma which is turning up. Notice price hit resistance at the 200 day sma.

The recent move down to the Primary low was timing the 18-week Primary cycle and a 2 year cycle. The longer term cycles (2 year) can distort the shorter term cycles (18 week). As noted above we may be seeing the 4 year cycle low later in the year although it could have been at the Dec 24 low.

September 21, 2018 seems to be the crest of the last Primary cycle and may have been the cycle high for the 4 year cycle.

The following dates may have significant moves or start of a move. The following aspects are for a reverse in trend or large range day.

This can cause market fluctuations, confusion, problems with agreements.

The above aspects are for the next couple of week. A list of powerful outer planets aspects follows. They will be covered in detail as we approach them. 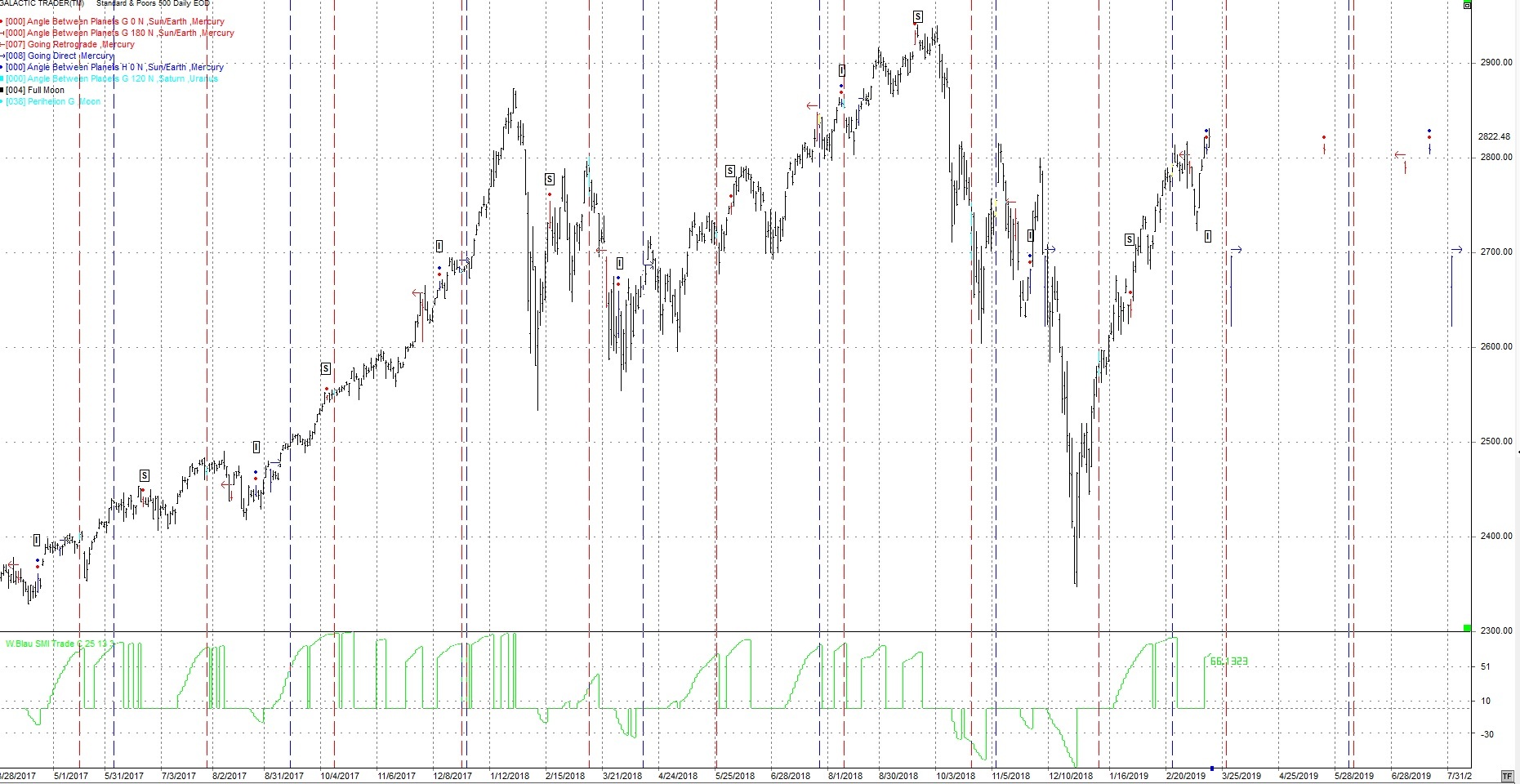 This Mercury retrograde period is occurring in late Pisces, a mutable water sign. Mercury also rules communication, commerce and trading, that is buying and selling. It has a reputation for problems, both communication, contracts and wrong decisions or choices.

The Mercury retrograde period is known to be volatile. There is potential for increased volatility and problems for both the Retrograde and Direct dates.

Any aspects, like those noted above are a minimum of 3 tds (trading days). Longer term aspects will be noted separately. The following list are planet aspects. There will also be Eclipses, Fixed stars, cycle charts and other Astrological items.

Jupiter square Neptune will be with us for most of the year. Due to retrograde motion Jupiter will square Neptune 3 times. This combination can point to an increase in spending, inflation, currencies and potential debt problems and bankruptcies. This could be on and off all year. Neptune alone is about illusion and delusion. Jupiter can be very favorable but tends to overdoing things. 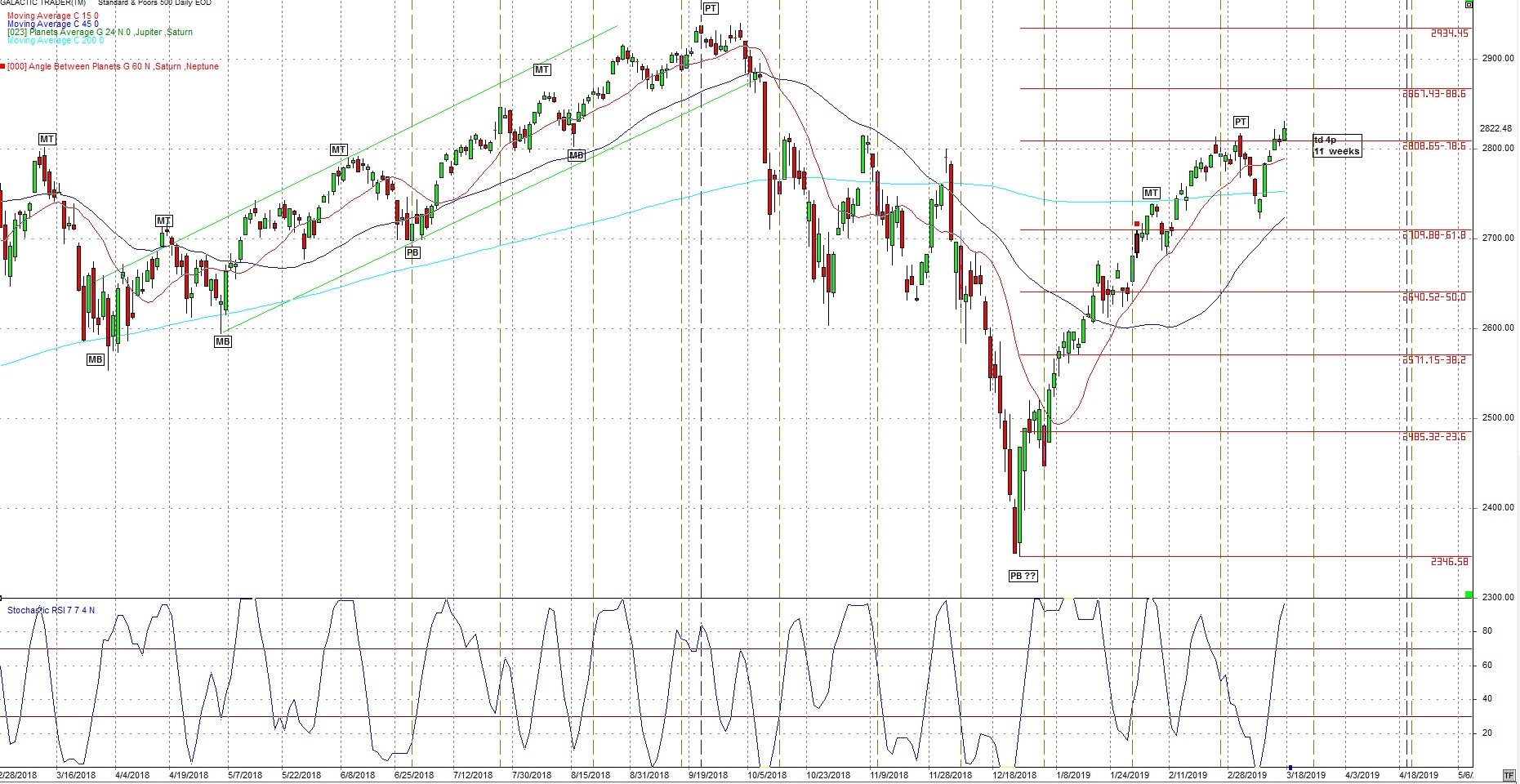 See the Bradley Indicator at the end of this section.

If the current volatility continues watch for a cycle turn during the next 2 weeks. Remember I’m looking for Gold and Silver to move up near March 21 +- 2tds.

Following is the 24 Harmonic chart we have shown for many months.

The Jan 2 date was a big range day. It is trying to move through the Jupiter Price line (blue) 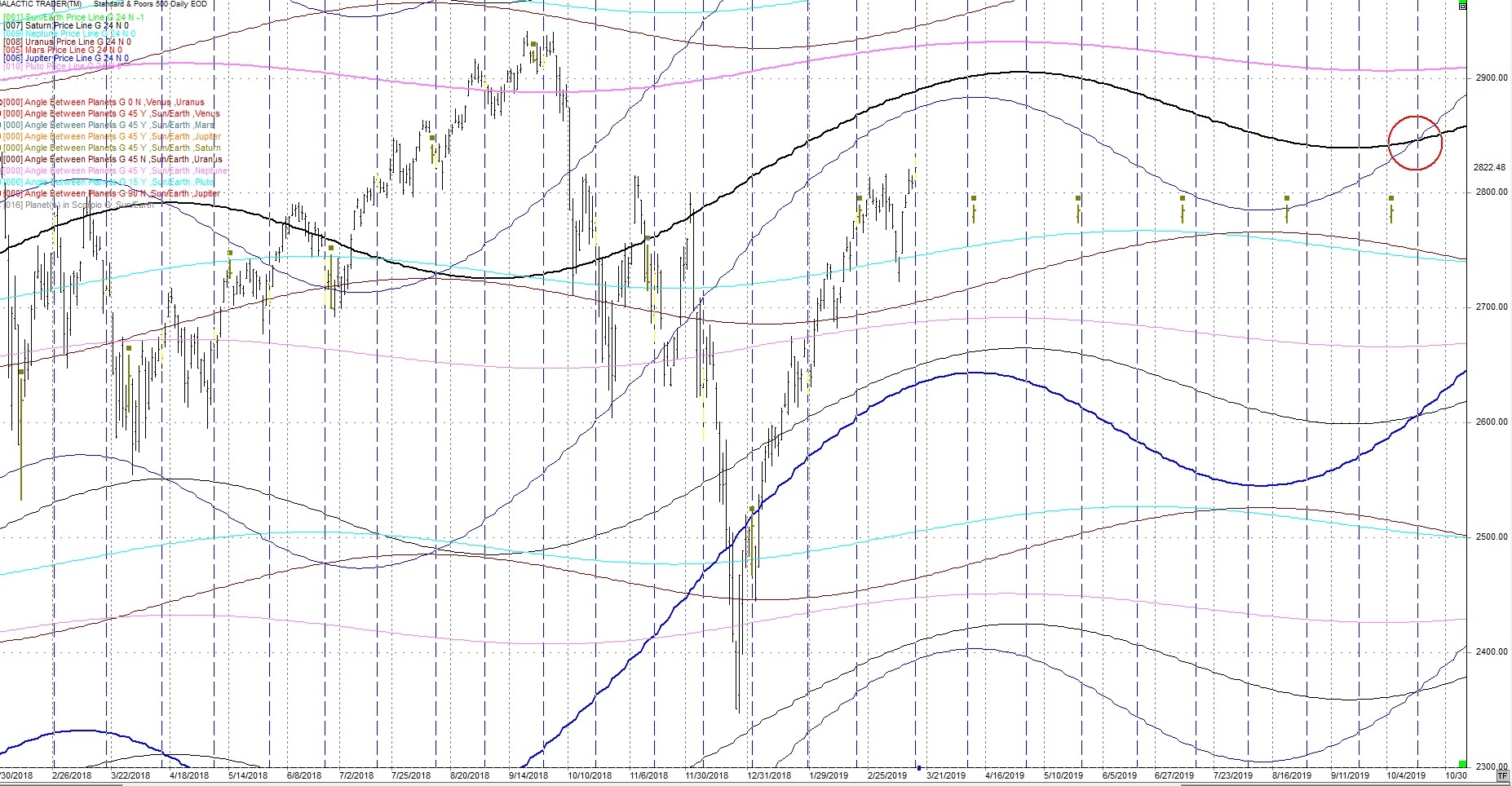 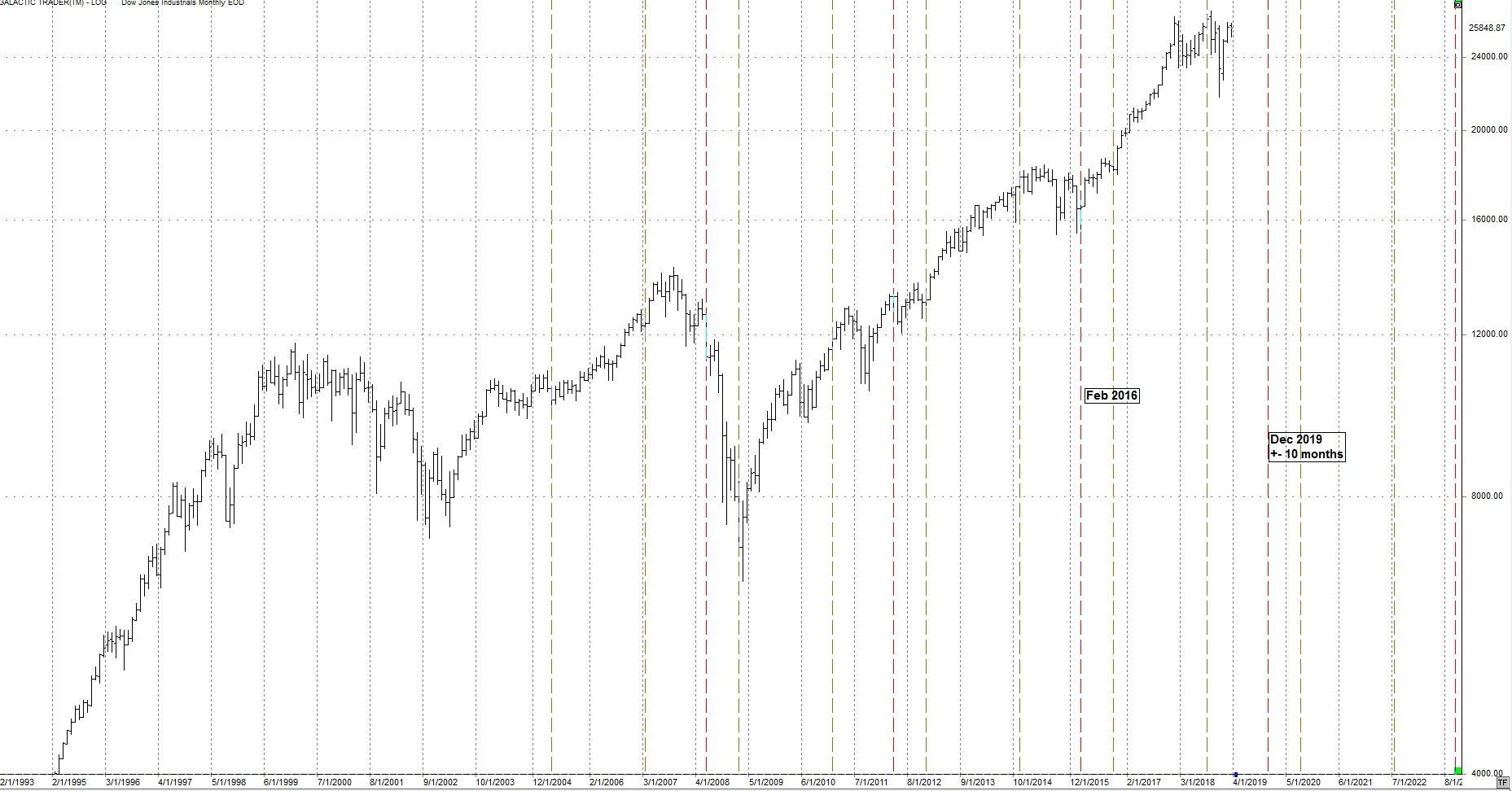 From the last few posts:

“This coming year could see an increase in geophysical activity, both earthquakes and volcanos.”

See the link under “Earthquakes”. This is an application from the USGS. Geophysical activity has been picking up.

There has been a number of volcano’s erupting as well. Japan, Hawaii, Philippines, others.

On a longer term basis the following monthly chart of the DJIA  shows the 15 year cycle (red vertical lines) and the 45 year cycle (blue lines). The 15 year is due now or took place April – June 2018. The 45 year due in Sept 2019. This is another example of a longer-term cycle possibly distorting shorter term cycles. Bear in mind they need a broad orb. 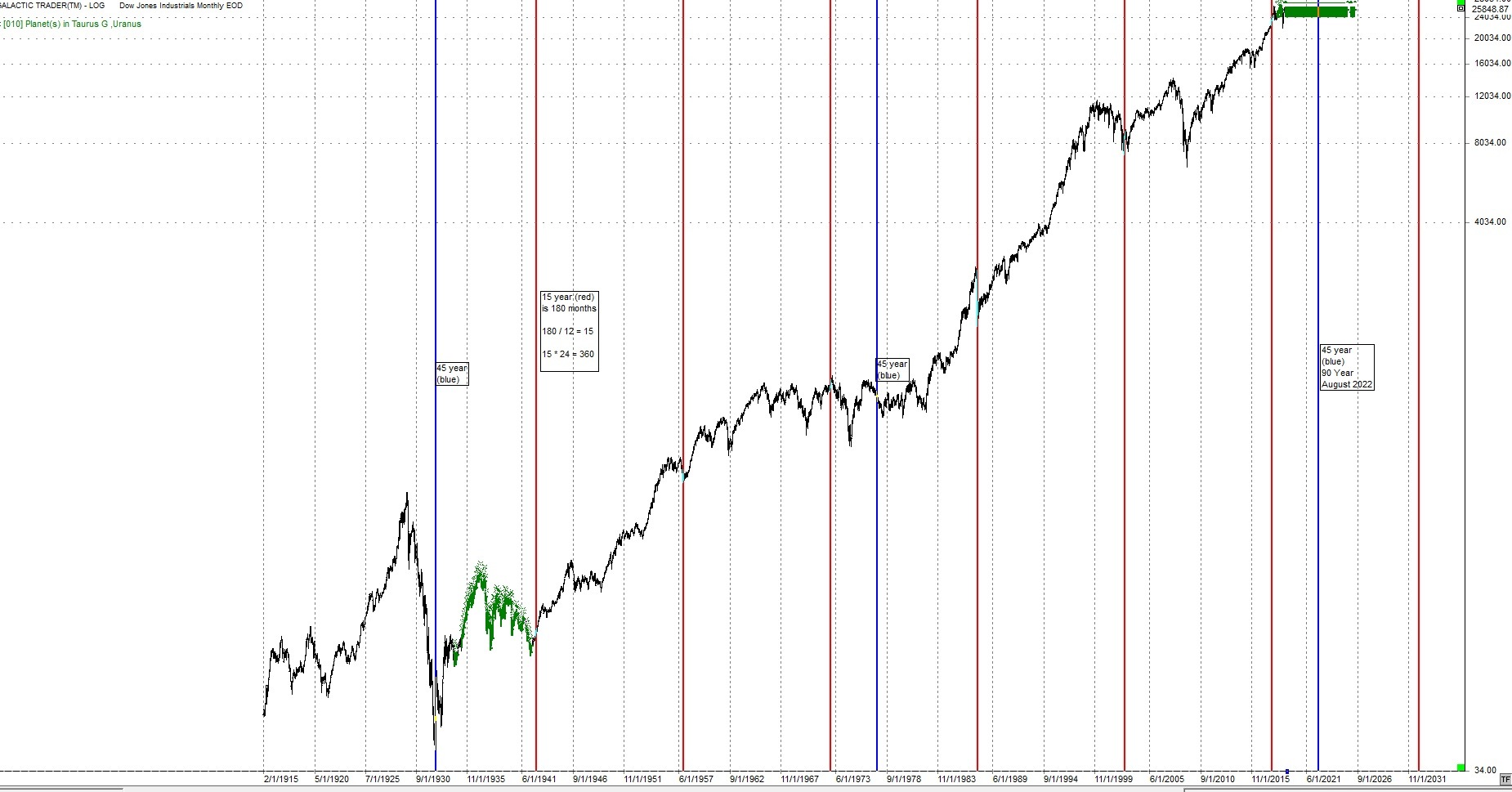 The following daily chart of the SP500 shows 2 Envelope channels. Red is the centered

We have had this noted it was due for a sell.  Also note the dark blue squares. They are the dates of the Mars square Uranus transit. 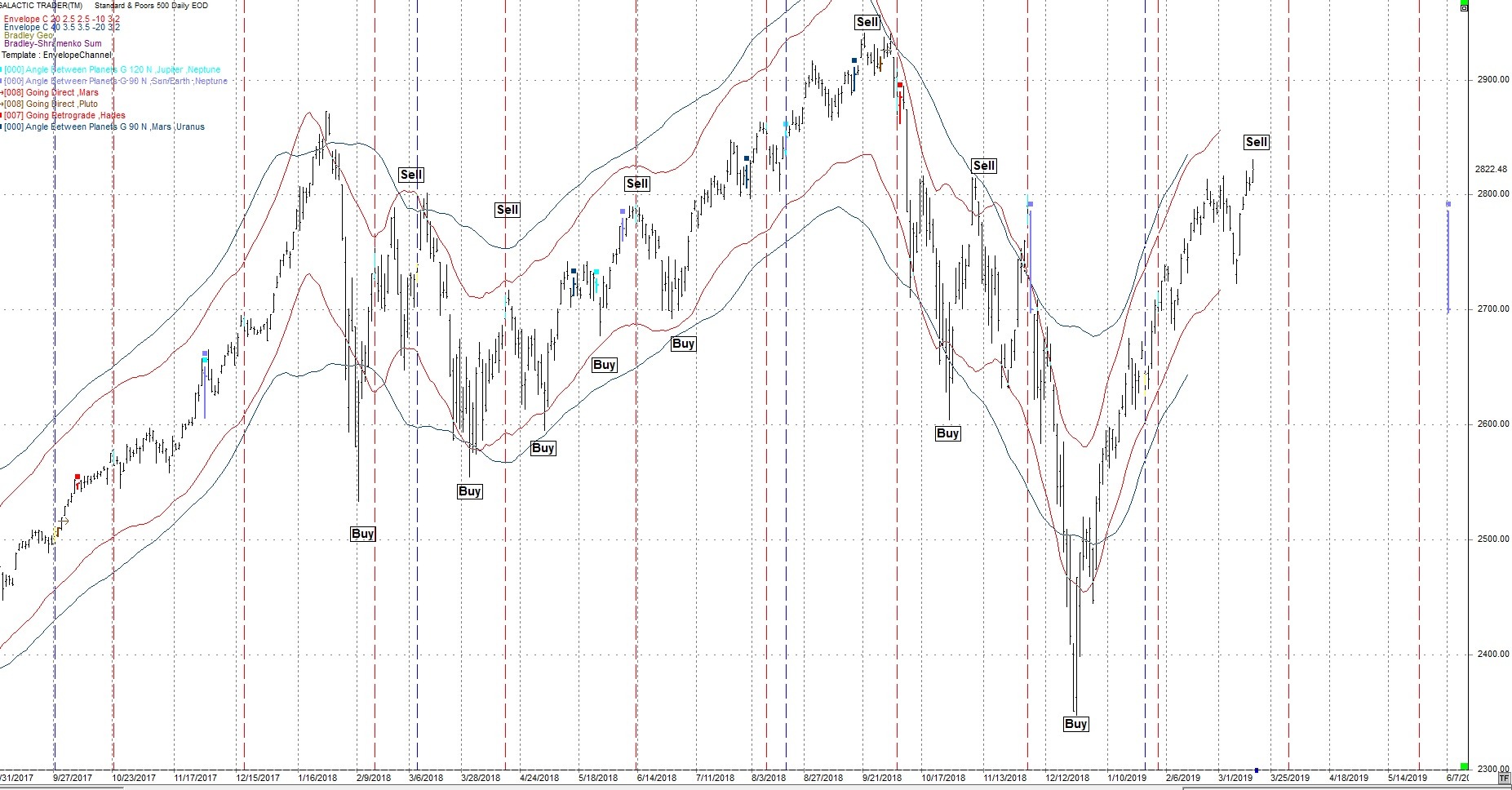 The red averages are based on the 20 week so they are shifted 10 weeks or a ½ cycle.

I brought up Iran on the last couple of posts. I’ll come back to those charts on any potential signs of conflict. It is getting close. Watch the news for problems with Iran.

Other cycles and Astrological events are the 20 year cycle and heliocentric Jupiter in Sagittarius.

The vertical black lines are the 20 year cycle. Note the lows. It is due again near March 2022 but it needs a wide orb. 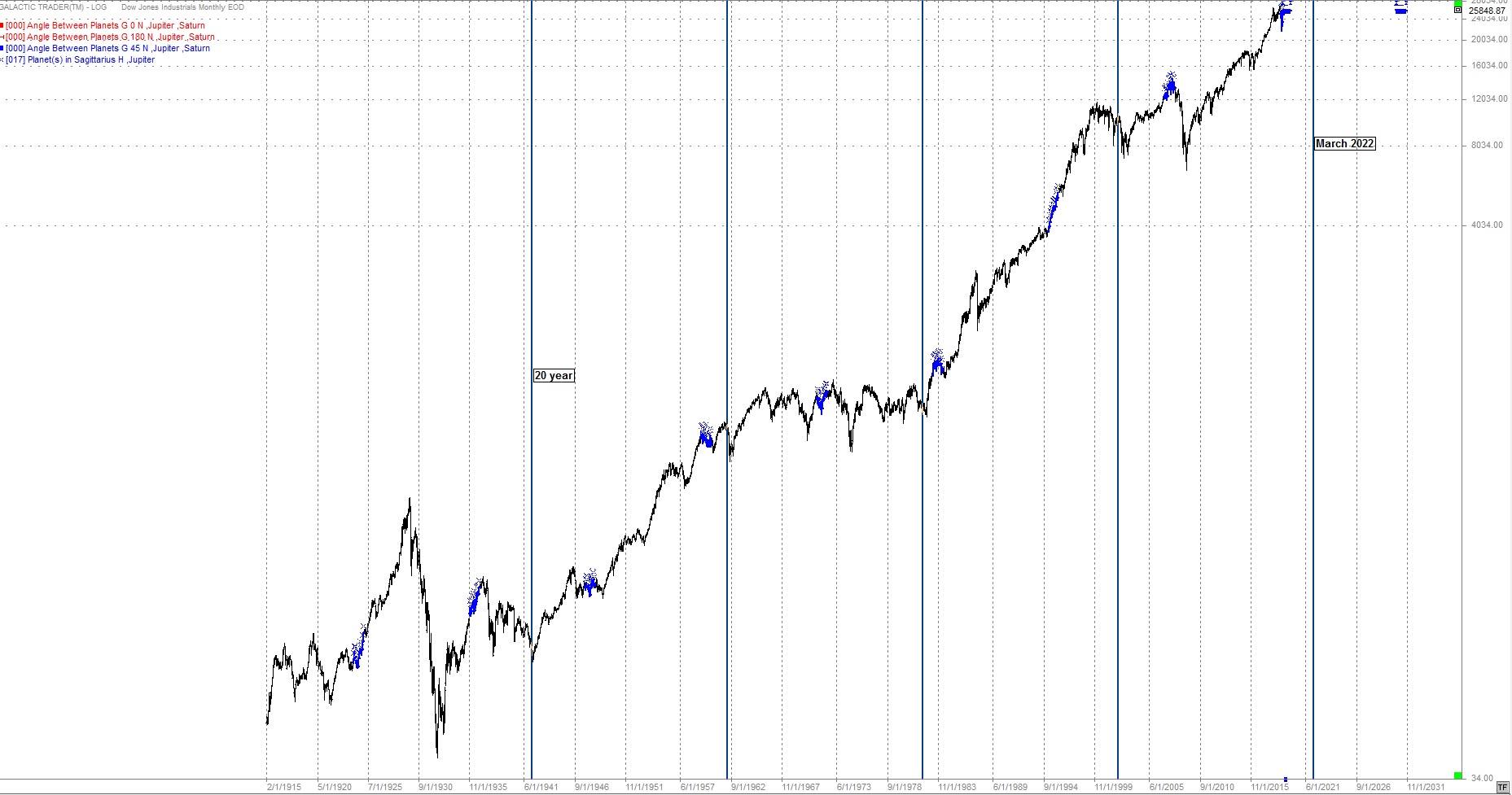 Another cycle which will be coming up is the 65 week in the DJIA. 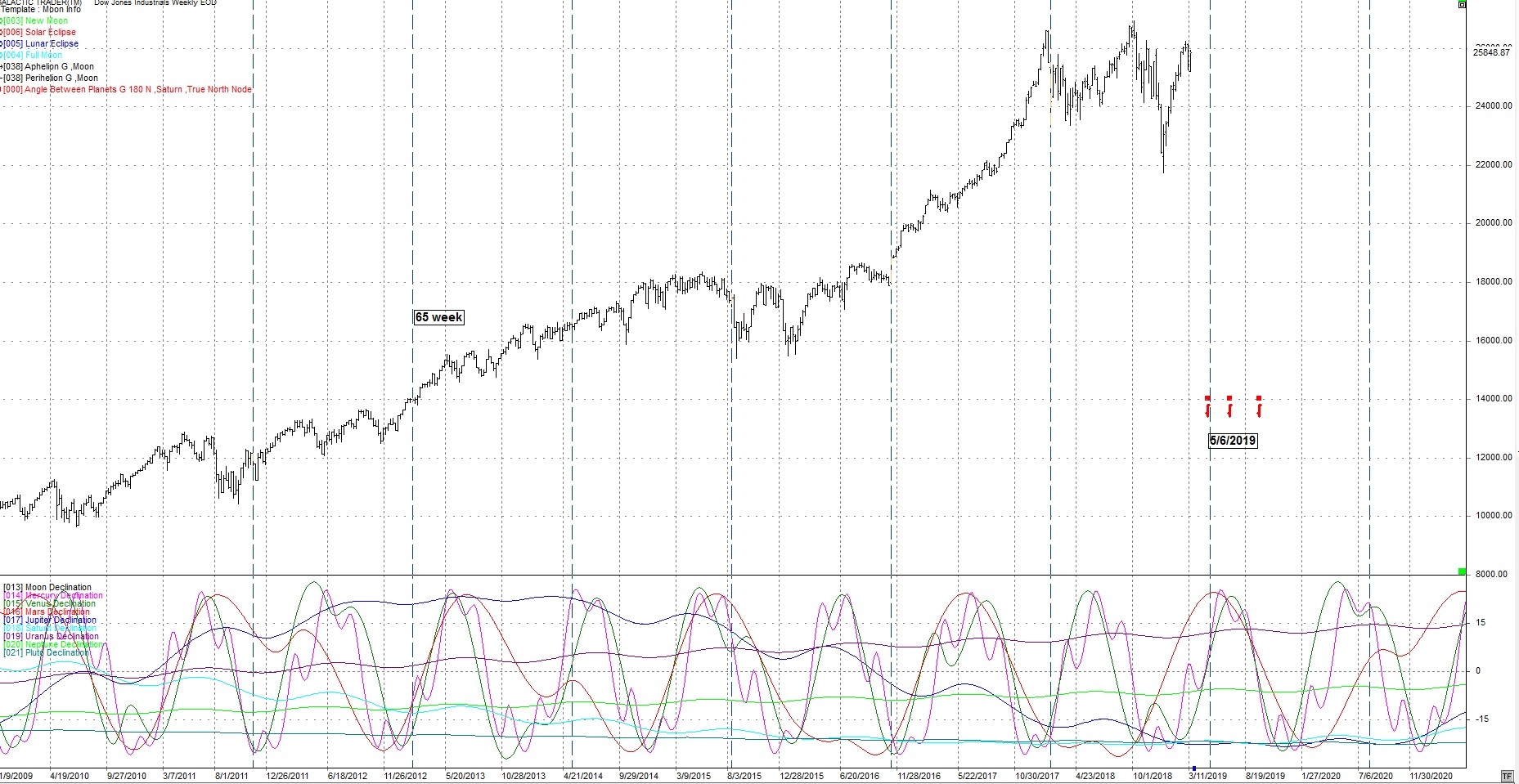 See the previous blog post for more details on the eclipses. More on the July eclipse in a couple of weeks.

This stock index forecasting tool was designed by astrologer Donald Bradley and published in 1947 in a booklet titled "Stock Market Prediction".

On the cover this tool is called the Planetary Barometer and inside the booklet it is called a Siderograph. Now it is simply called "the Bradley". The

Bradley is meant to forecast major and minor turning-points (where a trend will reverse) in either the Dow Jones Industrial Average or SP500 indexes. Bradley's work was obviously on the DJIA.

It does not forecast or anticipate whether that turning-point will be a high or a low. It has no polarity. The Bradley may turn up while the DJIA turns down. The amplitude of the Bradley swing is also not important. It only finds periods where trend changes occur.

It should be understood Astrologers in decades gone by who had no computers, spreadsheets, or databases to analyze data typically worked with much smaller data sets than we do today. This maybe why the Bradley worked so well when it first came out in 1947 but now is somewhat unreliable. Now, it goes through periods where it works fairly well but then can stop operating for months at a time. Originally it was for geocentric astrology (Earth centered) but there are now heliocentric models (Sun centered) and others.

In Bradley's own words:

"At no time must the reader gain the impression that a siderograph, as such, is a prediction of what the stock market will actually do. Nevertheless, observation proves that basic reversals in collective attitudes, clearly predicted by the line, are inevitably mirrored in stock averages"

- a rising market changes to a falling market

- a rising market changes to sideways

- a sideways market starts going up

- a sideways market starts going down

- a market going down changes to a rising market

The red line is the Bradley Indicator. 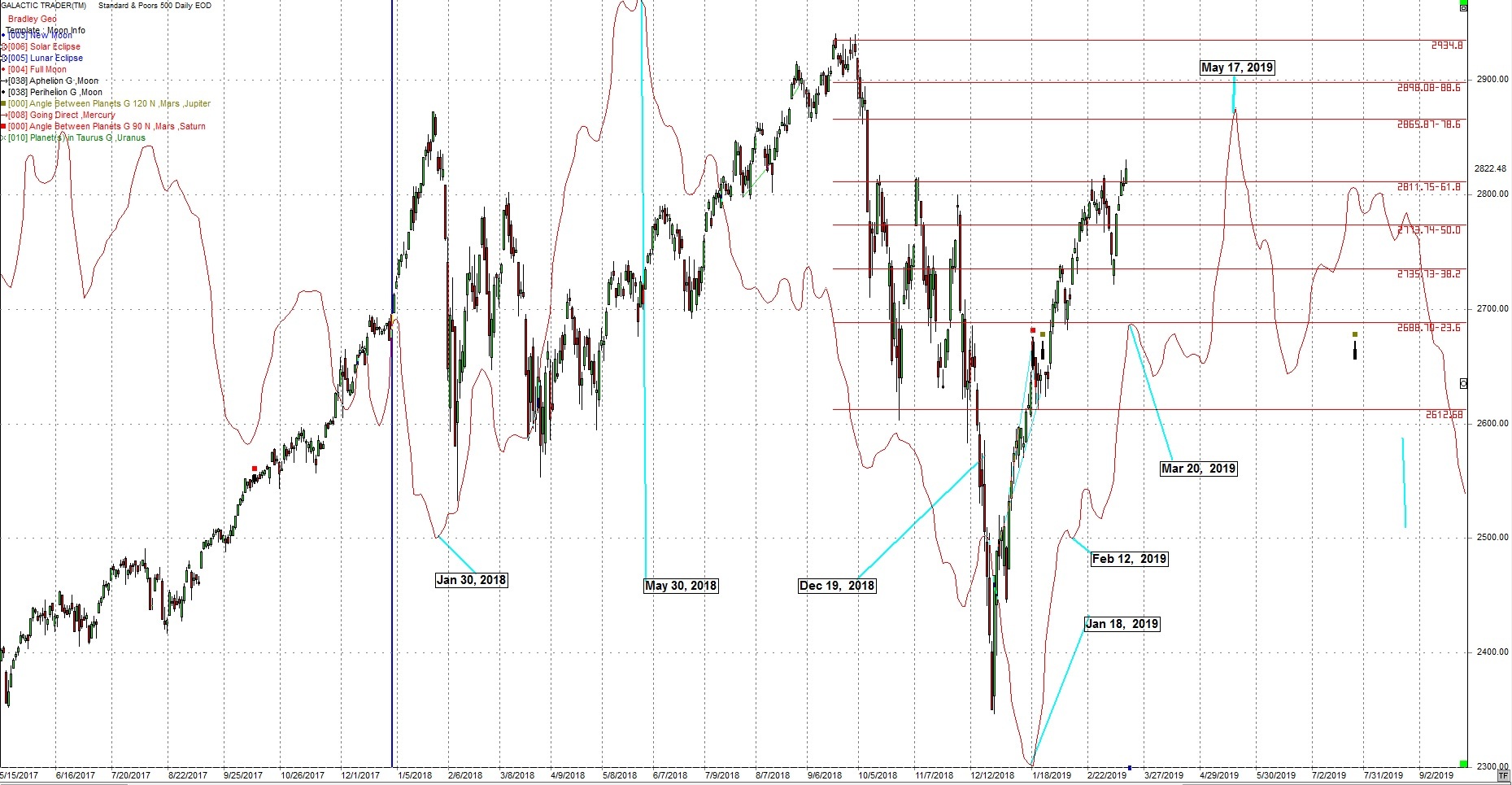