Yesterday, Thomas Jordan, the SNB Chairman, held a press conference in Bern as the SNB struggles to stimulate its economy. Its short and long-term yields are negative and while the consequences of such a monetary policy are not exactly known, the impact on banks and investors must be assessed.

Jordan also mentioned that the SNB is not willing to limit or abolish cash in order to prevent such adverse effects and other monetary tools such as helicopter money. At this point, the SNB has expanded its balance sheet to 110% of its GDP and we believe that there is still more room for further expansion, especially when looking at other countries with significantly higher debt to GDP ratio such as Japan or the United States.

Downside pressures are still weighing on the EURCHF despite the SNB’s massive intervention. We naturally remain bearish on the pair. The main driver of the pair is clearly the ECB and the December meeting is highly anticipated by financial markets. Volatility should come back then knowing that the end of the European QE program looms.

USD is marginally weaker today but broader bullish sentiment remains. IMM data indicates steady building of USD long speculative positions. Yesterday’s stronger than expected manufacturing PMI and Feds Evans hawkish speech indicated the Fed will raise interest rates three times in 2017 drove greenback demand (comments over low inflation should be ignored since 75bp of hike in one year for the fed is extremely hawkish). Expectation for a December 25 bp rate hike is now around 70% probabilities. Yet the USD has been aided by increasing concerns over the Brexit process. Threats by Nicola Sturgeon that Scotland would hold another independence reference if all legislatures are not in agreement and Belgium holding CETA hostage indicate it’s unlikely that Brexit will end smoothly. And most likely trigger collateral political upheaval. GBP is being driven by Brexit and politics over economic fundamentals making tomorrow GDP less important. Not only is the USD providing a traditional safe-haven, the steeping of the US yields curves has slowed as investor’s chance the higher returns in longer dated maturities. We expected solid US data will have a larger influence on fed expectations then fed commentary. On the docket today we will get the Conference Board consumer confidence which is expected to ease to 101.5 from 104.1 in September. The weaker read in a low news flow environment should push USD slightly lower. However, sell-offs in USD provide a short term opportunity to reload long positions. Due to the renewed weakness in oil prices due to the lack of OPEC production cut agreement will likely force commodities lower. This scenario should be negative for crude linked currencies in NOK, CAD, MXN and general commodity trades, AUD, NZD and ZAR. 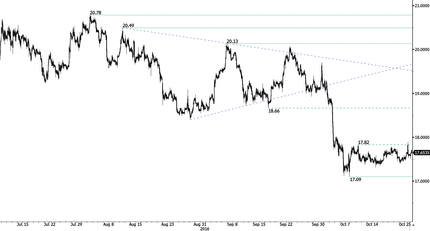