The Reserve Bank of Australia is having a monetary policy meeting, and as it is happening lately, the question is not whether they will tighten or not, but by how much? Financial markets anticipate another 50 bps rate hike, making it the fourth consecutive rate hike of such a degree. If so, the cash rate will reach 2.85%.

Back in August, Reserve Bank of Australia Governor Philip Lowe hinted at a potential slowdown in the pace of tightening as the main rate approached the estimated neutral level of 2.50%. However, Lowe and Co decided to hike by another 50 bps in September.

Policymakers need to fit in several pieces of a complicated puzzle. On the one hand, inflation in Australia peaked at a three-decade high of 6.1% QoQ in the three months to June, although a new monthly estimate showed that annual inflation eased to 6.8% YoY in August after reaching 7% in July.

At the same time, if the aggressive tightening continues for a couple of more months and the cash rate surpasses 4%, a recession seems inevitable. Yet the RBA may have no other choice but to keep draining liquidity: the imbalance with the ultra-aggressive US Federal Reserve will only weaken the AUD further, which will translate into higher price pressures in the Oceanian country. Finally, higher rates are having a negative impact on the already vulnerable housing market.

To add fuel to the fire, last week, the Reserve Bank of Australia reported a loss of  A$37 billion, the biggest in its history.

The central bank’s bond-buying program to support the economy through the pandemic is taking its toll even though it ended in February 2022. It seems unlikely, not to say impossible, for the RBA to embark once again on quantitative easing, something they may need to do if a recession hits the Australian shores.

As the RBA remains trapped between a rock and a hard place, it is more than possible that policymakers will deliver a 50 bps hike. Odds for a 25 bps movement increased ahead of the announcement, but given that the cash rate remains below the critical 4% mark, chances of a smaller hike are lower.

Nevertheless, Lowe and co will need to slow down the tightening pace pretty soon. The announcement could be AUD negative, as a 50 bps hike would not be a surprise, while the extent of the slowing is still unknown, but any commentary to that effect could dampen bulls’ ardor.

The AUD/USD pair trades below the 0.6500 threshold ahead of the event, with the greenback under mild pressure due to a better performance of global equities and easing government bond yields.

The pair set a 2022 low at 0.6363 last week and is currently battling with the 23.6% Fibonacci retracement of its daily slump measured between 0.6915 and the aforementioned low, at 0.6490. The advance seems corrective, according to technical readings in the daily chart, amid the extreme overbought conditions of the greenback.

The 38.2% retracement of the same slump is at 0.6570, a potential bullish target should the RBA come out more hawkish than anticipated – such as by hinting at more 50 bps rate hikes in the future. The 2022 low is the level to watch on a more dovish-than-anticipated announcement, such as a 25 bps rate hike coupled with lower hikes to come. 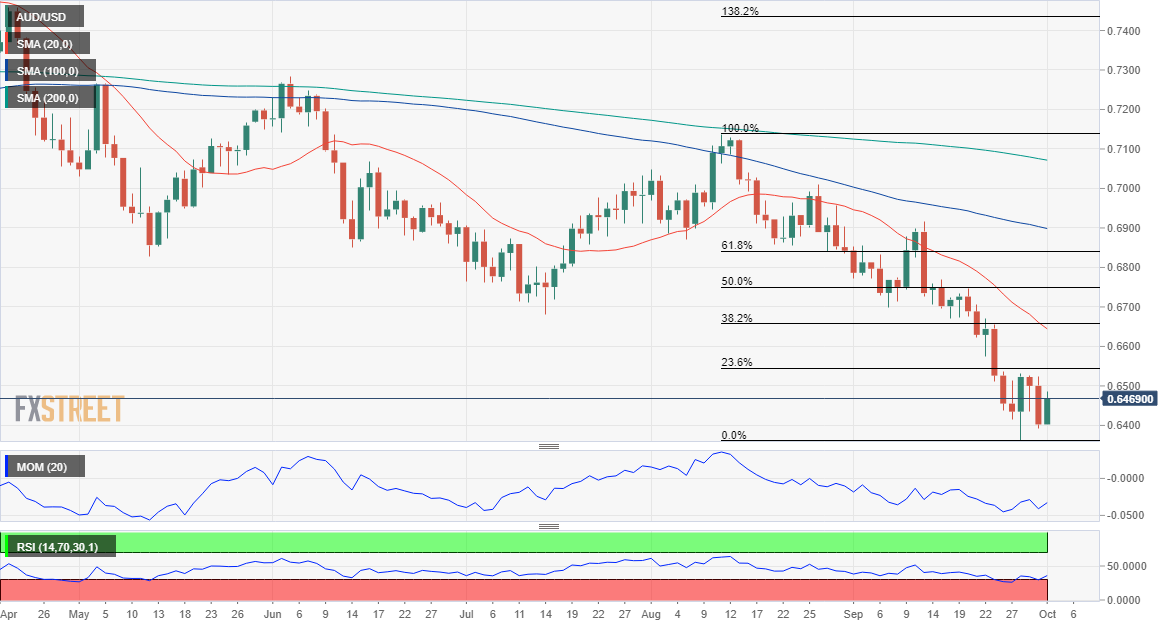