The US will announce its November employment figures on Friday, December 3. The country is expected to have added 550K new jobs in November, while the unemployment rate is seen contracting to 4.5% from 4.6%. The country added 531K positions in October, which brought the total number of jobs to 148.3 million, leaving a shortfall of 4.2 million compared to pre-pandemic levels.

Is inflation the only problem?

Back in October, the US Federal Reserve was optimistic about jobs’ creation, noting that a couple more good reports would be enough to trigger tapering. Also, back then, higher inflation was considered “temporary.”  Policymakers were concerned about price pressures, although not enough to refrain from announcing tapering. Chair Jerome Powell announced in early November that the FOMC would start to reduce the pace of asset purchases this December.

Throughout November, inflation-related concerns escalated, while a newly discovered coronavirus variant resulted in Powell warning that the Omicron strain could slow job growth and extend the supply chain disruption.

Also, he said that it’s time to retire” the word “transitory” to describe inflation and discuss speeding up tapering. Ending the pandemic-related financial support would open the doors for sooner rate hikes.

But is skyrocketing inflation enough to act? As said, the US still needs to recover 4.2 million job positions just to return to pre-pandemic levels. Being optimistic, such a goal could be achieved mid-2022, as long as uncertainty related to the coronavirus Omicron variant can be dealt with.

Tepid job creation coupled with stubbornly high inflation may put the Fed between a rock and a hard place, as the risk of retrieving financial support too soon may pose a risk to economic progress.

A Nonfarm Payrolls headline reading of 300K or lesser will sound the alarms. As long as it stays above 400K, policymakers will be able to act.

The greenback has reached fresh yearly highs against most major rivals in November, with the following pullback looking corrective at this point. A solid employment report could trigger speculation that the Fed will announce new measures as soon as next week, something that should push the dollar higher and equities lower.

US Treasury yields’ behaviour will be critical for the market’s direction, however, particularly the 10-year note yield. Currently at around 1.43%, a move above 1.50% will likely boost the USD across the FX board.

Worth mentioning that Canada will also release its monthly employment report, which may result in USD/CAD initially seesawing without a clear direction

The pound and the aussie are the dollar’s weakest rivals and could fall to fresh 2021 lows on higher yields and lower equities.

As for the EUR/USD pair, as long as it remains below 1.1380, the risk will be skewed to the downside.  A break below 1.1300 and the chances are of a slide towards the 1.1160 price zone. As far as the upside goes, a move higher could see the pair test a critical long term resistance level at 1.1470. 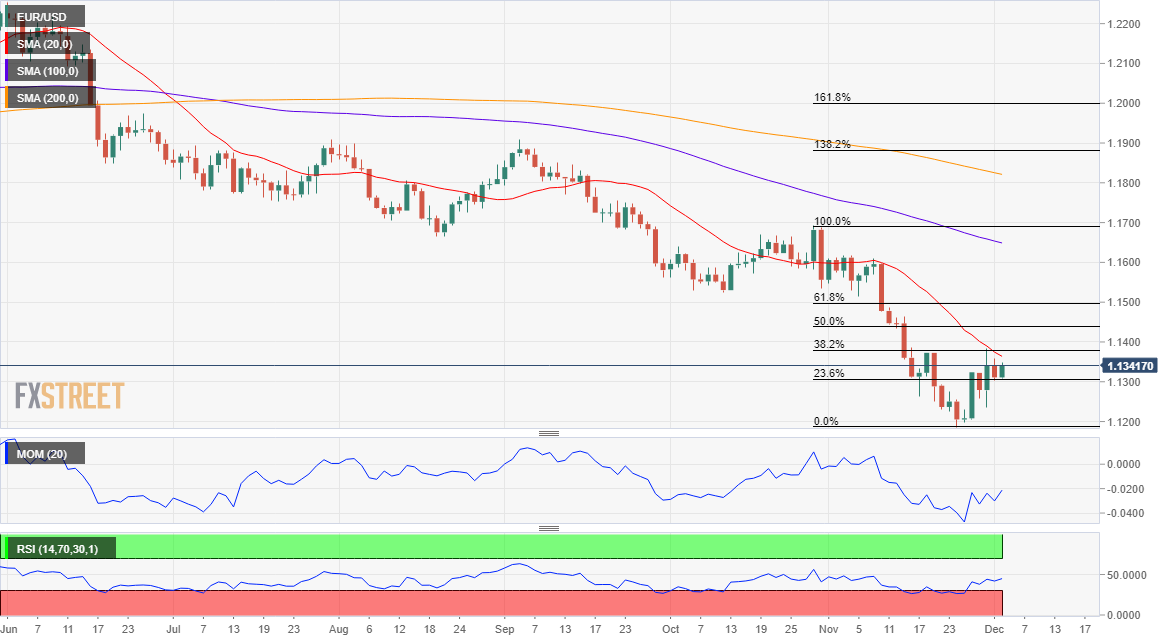 EUR/USD has lost its recovery momentum near 0.9700 during the European trading hours on Monday and returned below 0.9650. The risk-averse market environment helps the greenback preserve its strength and forces the pair to stay on the backfoot.

GBP/USD has regained its traction and rose above 1.0800 during the European trading hours on Monday. Market chatter about the Bank of England possibly delivering a statement later in the day seems to be helping the British pound find demand.

Gold fails to hold above $1,640 as US yields push higher Premium

Following the selloff witnessed in the early Asian session, gold turned positive on the day near $1,650 but erased its daily gains. The benchmark 10-year US Treasury bond yield is up more than 2% on a daily basis, not allowing XAU/USD to stretch higher.