The US economy will unveil its latest employment figures this Friday, and the country is expected to have added 180K new jobs in November, quite a number, considering that it only managed to add 128K in October. The unemployment rate is foreseen steady at 3.6%, while wages’ growth is also seen within familiar levels, up by 0.3% MoM and by 3.0% when compared to a year earlier.

The US economy is not in its best shape ever, but is clearly one step ahead of its major counterparts: Q3 Gross Domestic Product came in at 2.1% in its latest revision, a growth rate than largely double that of other major economies. The latest EU GDP posted an annual growth rate of 1.2%, while in the same period, the UK economy grew by 1.0%, its slowest annual rate in a decade.

The same picture could be seen with inflation and employment. While most economies are still struggling to stimulate consumption and with inflation of roughly 1.0%, US CPI has been around the Fed’s target of 2.0% for over a year already.

As for employment, indeed, there were some ups and downs throughout the year, yet the unemployment rate is close to a five-decade low. That said, a worse-than-anticipated report for sure can have a short-term impact on the greenback, although it seems unlikely that, by itself, could unwind a persistent dollar’s sell-off.

Once again, leading indicators ahead of the NFP release are providing more negative than positive hints. The ADP survey released this week showed that the private sector added 67,000 new jobs in November, way below the 140K forecast. Despite weekly unemployment claims were down in the last week of the month, the number of people receiving unemployment benefits has increased to 1.693M. The employment sub-component within the ISM Manufacturing PMI report disappointed for the third month in a row, printing a modest 46.6, way into contraction territory.

The positive clues are not as positive, as the Challenger Job Cut report indicated decreasing cuts, but does not mean new positions available, while the ISM Non-Manufacturing PMI employment sub-component was the only real upbeat figure, improving to 55.5 in November from 53.7 previously.

At this point, the market is not expecting an upward surprise, so in that case, the dollar can recover sharply, particularly because of profit-taking ahead of the weekend.

A worse-than-expected outcome, on the other hand, should exacerbate the current dollar’s bearish trend, although with an uneven result across the FX board. For sure, strong currencies such as the Pound or the CAD, and those considered safe-havens, like the yen, would have more chances of gaining ground.

The poor mistreated EUR could spike higher but is yet to be seen if it can sustain gains in time.

Ever since rallying in October, the EUR/USD pair has been unable to find a direction. In the last weeks, it bottomed twice around the 61.8% retracement of such a rally, somehow suggesting that the market is not ready to return to the greenback, neither compromise with the shared currency, as it holds well below the top of the mentioned range at 1.1179.

Daily basis, the pair is battling to surpass the 23.6% retracement of the mentioned advance at 1.1108, while so far, the weekly high comes at 1.1115, which means that once beyond this last, chances are of a bullish extension toward 1.1150, en route to 1.1180. The NFP reports needs to be terrible for the pair to overcome this last.

The main support from here is 1.1065, the 38.2% retracement of the mentioned rally, and where buyers are aligned these days. Below it, the pair can slide toward the 1.1000 figure, but it’s quite unlikely it will break below it just with a solid employment report. 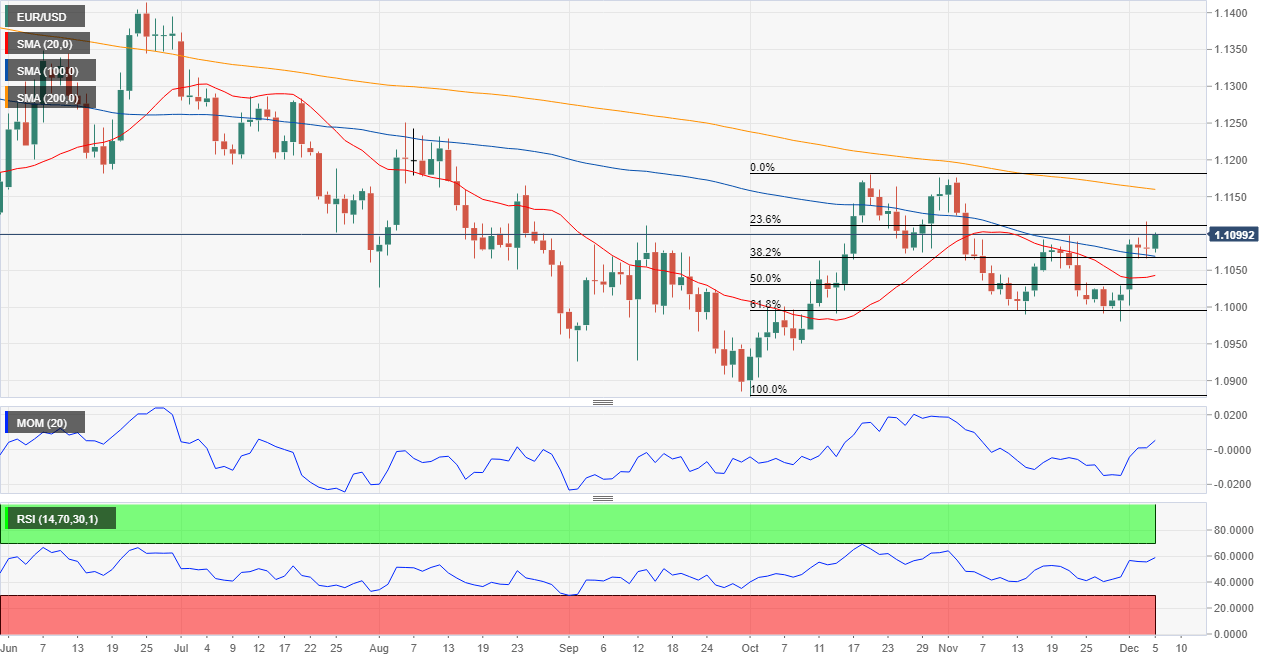