100 million doses in 100 days – President Joe Biden's pledge has proved to be a low bar too easy to cross, and that may also be the case for February's Nonfarm Payrolls. If the bar is indeed low, it would be easy to surpass and a trigger for dollar gains.

Why are estimates low?

Ten million Americans are unemployed – that has been the focus for Federal Reserve officials, over and over again. They see through the fall of the Unemployment Rate to 6.3% and eye the jobs lost that need to be restored.

By stressing the dire situation, the Fed is contributing to lowering expectations. Officials receive the NFP figures in advance and tend to stay mum, but investors may interpret caution from speakers as a hint that data will be weak.

ADP's private-sector labor report missed estimates with an increase of only 117,000 jobs gained last month. While the correlation between the official figures and the payroll firm's numbers was weak after the pandemic erupted, it has been improving in recent months. As most Americans work in the private sector, that is a worrying sign.

Secondly, the US is a developed economy that leans towards the services sector – and figures were disappointing there as well. The ISM Purchasing Managers' Index for the sector missed estimates with 55.3 points, and the employment component also slowed down. While the ISM Manufacturing PMI beat estimates, data leading to Friday's report leans lower. 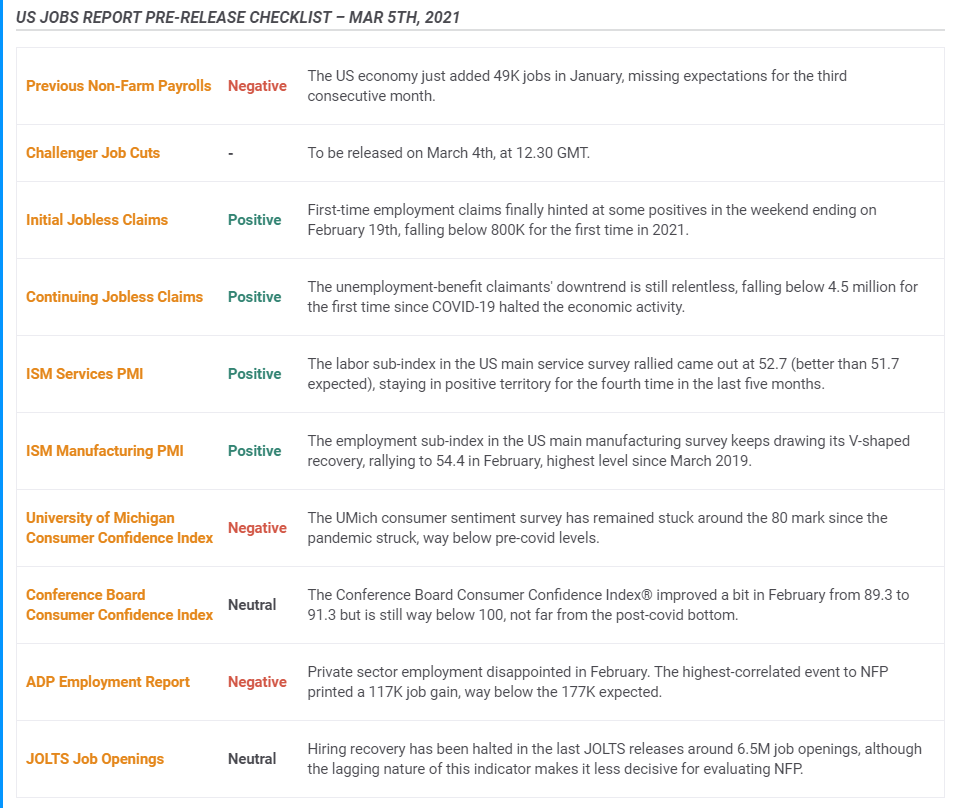 Economists have been too optimistic on Nonfarm Payrolls figures in the past three months, including December's loss of jobs. As the NFP is notoriously hard to estimate, perhaps those surveyed will now err on the side of caution and are lowering their initial forecasts, resulting in 182,000 seen on the calendar.

As mentioned earlier, data leading to the release has probably pushed real estimates even lower.

If the premise above is correct, the dollar has room to rise in case of a figure that only meets estimates with 182,000. A surge of over 250,000 would already serve as a bigger booster. Markets would assume that quick hiring even before the reopening means a rapid return to normality.

Apart from the greenback advancing with growth prospects, seeing more people back to work means more money to spend and potentially higher inflation – thus higher rates down the road.

What can be considered a disappointment? With expectations realistically lower than 182,000, a meager increase of fewer than 100,000 jobs would serve to push the greenback lower. It would vindicate the Fed's cautious approach and imply lower rates and more bond-buying for longer.

Expectations for February's Nonfarm Payrolls, published on Friday, March 5, at 13:30 GMT are low and could be too low. In that case, the dollar has room to rise.