One word perfectly sums up the events of this week. Disappointing.  For some it began with the uninspiring conclusion of Game of Thrones, long-term stock investors grimaced at the lack of progress with the US-China trade war, and FX traders will see the British pound remain in limbo after Prime Minister May admitted defeat in failing to deliver a Brexit deal.

Theresa May’s watch will end on June 7th and the Brexit process basically goes back to square one.  The short-term fate of the British pound will depend on the final candidates preference for type of Brexit (soft/hard) and if they appear capable of negotiating across party lines to secure the votes in getting a deal pushed through Parliament.

European politics remain front and center as Nationalist and far-right parties are expected to make progress in gaining European Parliamentary seats.  The result from the elections will likely deliver further friction within the bloc and more hurdles on integration.  The trade war has delivered a major blow to risk appetite with all three major US indexes posting weekly losses, as well big monthly declines.  Both the Chinese and Americans appear poised to ramp up domestic support/stimulus in the event of a prolonged standoff.  Someone will blink and lead the return to the negotiating table, both sides are motivated, but we may need to see more market carnage before that happens.  Key upcoming events include a rate decision from the Bank of Canada, the annual budget release for New Zealand, US preliminary Q1 GDP reading, China’s Manufacturing PMI reading and Canadian GDP.

Theresa May’s announcement means Brexit is right back to where we were right after the Referendum. The Brexit outcomes are still plentiful: We could see the Brexit deadline extended beyond Halloween, a general election is very possible or a second referendum asking for a no-deal or to remain.

Uncertainty will remain in place until we learn more about who will take over the negotiations and that process will take almost two months.  The current favorite to replace Theresa May is former Foreign Secretary Boris Johnson, a hardliner that would suggest a greater risk for a no-deal Brexit.  History however is not on Mr. Johnson’s side, as he was the odds on favorite last time.

The British pound is likely to remain volatile and the risks could be to the upside following the recent precipitous drop.  The markets will likely expect an orderly exit, and that should prove supportive for cable. 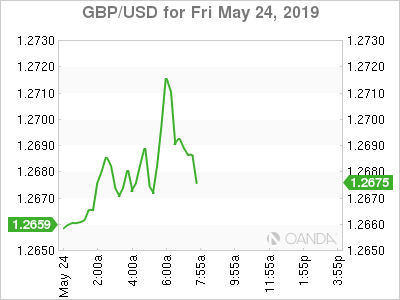 The latest reports on housing and durable goods is not pointing an optimistic outlook for the US economy.  US economic data points still outperform the other advanced economies, but its strength is heavily priced in FX markets, which could mean we may have just seen a key bottom put in place for the dollar.

While the financial markets have been hit with a wave of risk aversion that has sent bond market yields plummeting.  Despite the recent optimism from the Fed and their minutes, risks to the downside are growing and the Fed may need to deliver another dovish message in the coming months that cement rate cut bets in the nearer future.  Current expectations are at 55% for a rate cut at the September meeting, but that could increase as growth has been dealt a strong blow from the US-China trade war and cautious tones from this past earnings season. 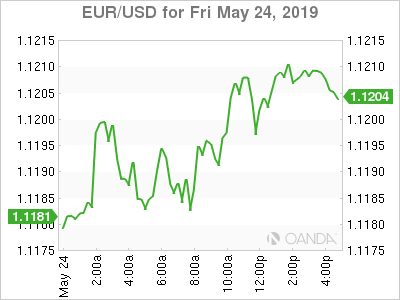 Crude prices have been battered by global demand concerns, rising stockpiles in the US and fading expectations that OPEC and their allies will unanimously be on board and deliver an extension of production cuts this year.  The markets have been closely paying attention to the trade war between two largest economies and the lack of progress is likely to put an unexpected dent in demand forecasts for the second quarter.

The wildcard for oil remains geopolitical risks as tensions remain high between the US and Iran.  The US appears set on showing Iran they are prepared for an escalation in the region.  President Trump is sending 1,500 troops to assure freedom of navigation in the area.  While both sides appear not interested in starting a war, tensions are flaring up and the risks for some conflict are growing.

Spare capacity and output at risk should support for a stabilization in prices in the short-term, but if we see another multi-million barrel build with US inventories, oil could see the bearish correction continue. 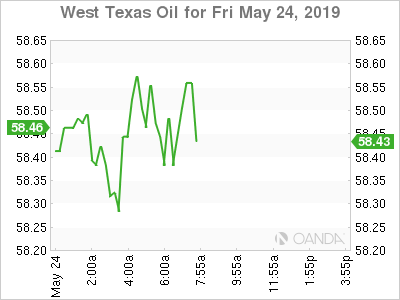 Gold prices remain in a quagmire as wave of risk aversion that has sent bond market yields plummeting has yielded minuscule gains for the safe-haven.  The last six weeks of yellow metal trading has seen alternative bullish/bearish trading that for the most part has been kept in a tight $1,270 to $1,300 range.  The deflationary conditions globally have hurt the inflationary pressure reason for owning gold.  With US equities hovering within 5% of their record highs, gold is likely to have difficulty breaking out.  Gold may need the Fed to confirm what markets are pricing in already and signal rate cuts are coming.  That however may not happen anytime soon, if we see a resumption of constructive trade talks between the US and China. 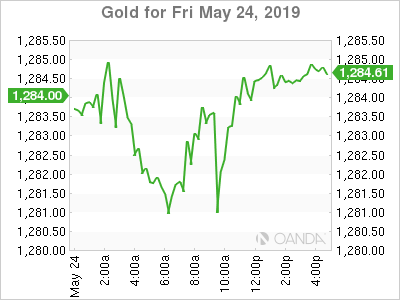 Some past Bitcoin skeptics, such as JP Morgan and Facebook are becoming believers in cryptocurrencies.  The recent surge with Bitcoin was supported on the continued progress with mainstream commerce adoption.  First, we saw JP Morgan create the first US bank-backed cryptocurrency, then we saw Fidelity launch plans for institutional bitcoin trading, and E-Trade intends to offer cryptocurrency trading on their platforms.  The financial community is seeing more companies want to take advantage of the digital currency and the latest to join is Facebook.  The social media giant aims at competing with banks in offering secure and cheaper ways of sending money.

Bitcoin is meteoric rise immediately was followed by a tulip-mania crash.  The current rally is seeing price trade around the $8,000 level and further mainstream acceptance could prove vital for the bullish momentum to continue.  To the upside the psychological $10,000 level provides key resistance, while $6,500 remains major support. 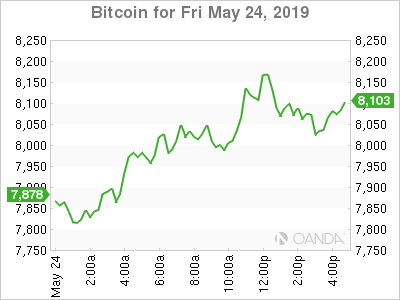