Major forex and equity indices remain stuck on a see-saw of risk-on/risk-off as a lack of conviction has taken over in recent sessions. Depending upon how the wind blows, there is consideration of the bearish factors of second waves COVID-19 infections versus the more bullish positioning for continued stimulus from central banks and governments. However, the feeling is that the risk recovery of Q2 which drove record gains on Wall Street. However, in the past couple of weeks, uncertainty has crept into markets, The US dollar has gone almost nowhere over the past week and this is reflected across the outlook of consolidation across major forex pairs. One market is though making ground, with the breakout on gold to multi-year highs. Can this be sustained? In the past 24 hours we have seen Treasury yields starting to pick up once more and a mild yield curve steepening. This tends to come with more positive risk environment, which is good for equities but less so for gold. The PMI data (manufacturing and services) and crucial US jobs data (ADP today, Nonfarms tomorrow) in the coming days could be key to whether this improvement in yields continues. Initial signals from the Chinese PMIs are positive and it will be interesting to see if this continues with the European data and ISM later today.

Wall Street closed decisively higher for a second day, with the S&P 500 +1.5% at 3100. US futures are ticking slightly lower early today (E-mini S&Ps -0.2%) which has given a mixed look to Asian markets (Nikkei -0.8%, Shanghai Composite +1.1%). European markets are a shade lighter, with FTSE futures -0.2% and DAX futures -0.1%. In forex, there is little real direction once more, although JPY is a mild outperformer (despite a negative read from the Tankan survey), whilst GBP is lower. In commodities, gold and silver are consolidating their breakouts, whilst oil is pulling over 1% higher.

Chart of the Day – USD/CAD

We last looked at USD/CAD as a rebound was setting in from the channel low, noting that a rebound could see a move back towards the 50% Fib level (of the big 1.2947/1.4667 bull run). However, the move has been a struggle for the dollar to find any sustainable traction. The unwind has now come to the top of the downtrend channel and signs are that this could be another chance to sell. Trend resistance comes at 1.3710 today, whilst the rebound faltered last week at 1.3715. Yesterday’s decisive negative candle means the market is now breaking a near term recovery trend, whilst also closing back under the 61.8% Fib level (at 1.3605) which increases the negative pressure. Once more we see the RSI faltering in the low 50s (where the rallies failed throughout April and May), whilst the Stochastics have posted a “bear cross” (which have been excellent selling gauges in recent months). This looks to be a market setting up for a renewed leg lower. The fall back in the past couple of sessions does though bring the market into the belly of a congestion zone between 1.3480/1.3715 so there is a degree of uncertainty, but a move below 1.3480 would really re-open the downside now. 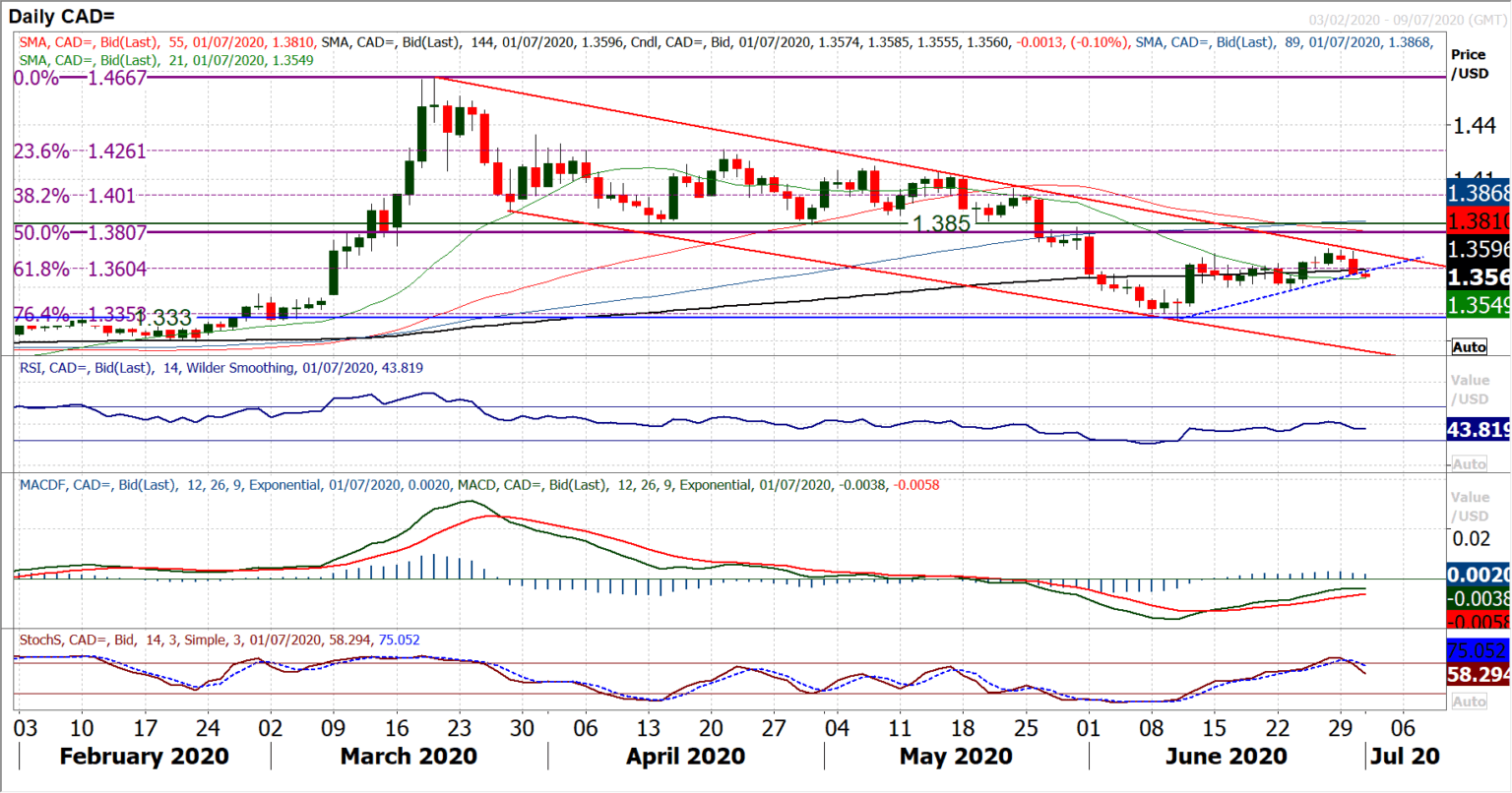 As a run of contradictory candles has stretched to a fourth completed session, Brent is increasingly seeing a lack of conviction taking hold. Although the recovery is still intact, the move is faltering and looking a little tired now. We have already seen a recovery trend from the March low being broken, and now a shallower uptrend (of the past seven weeks) is breaking too. This trend breach comes as momentum indicators (although still medium term positively configured) are sagging. The MACD lines have been falling over in the past couple of weeks (a bear cross three weeks ago was followed by a bear kiss last week), even as the price made a new high of $43.95, something that is cause for concern. The RSI and Stochastics also show mild negative divergences. Whilst we are not turning negative on Brent Crude (our positive positioning remains intact whilst the market is supported above $36.40/$37.00), a failure of support at $39.65/$40./00 would certainly require attention. For now this is just a near term consolidation and the market is ticking a shade higher, but the bulls need a bit of a pick me up now. A decisive close above $41.95 would help. 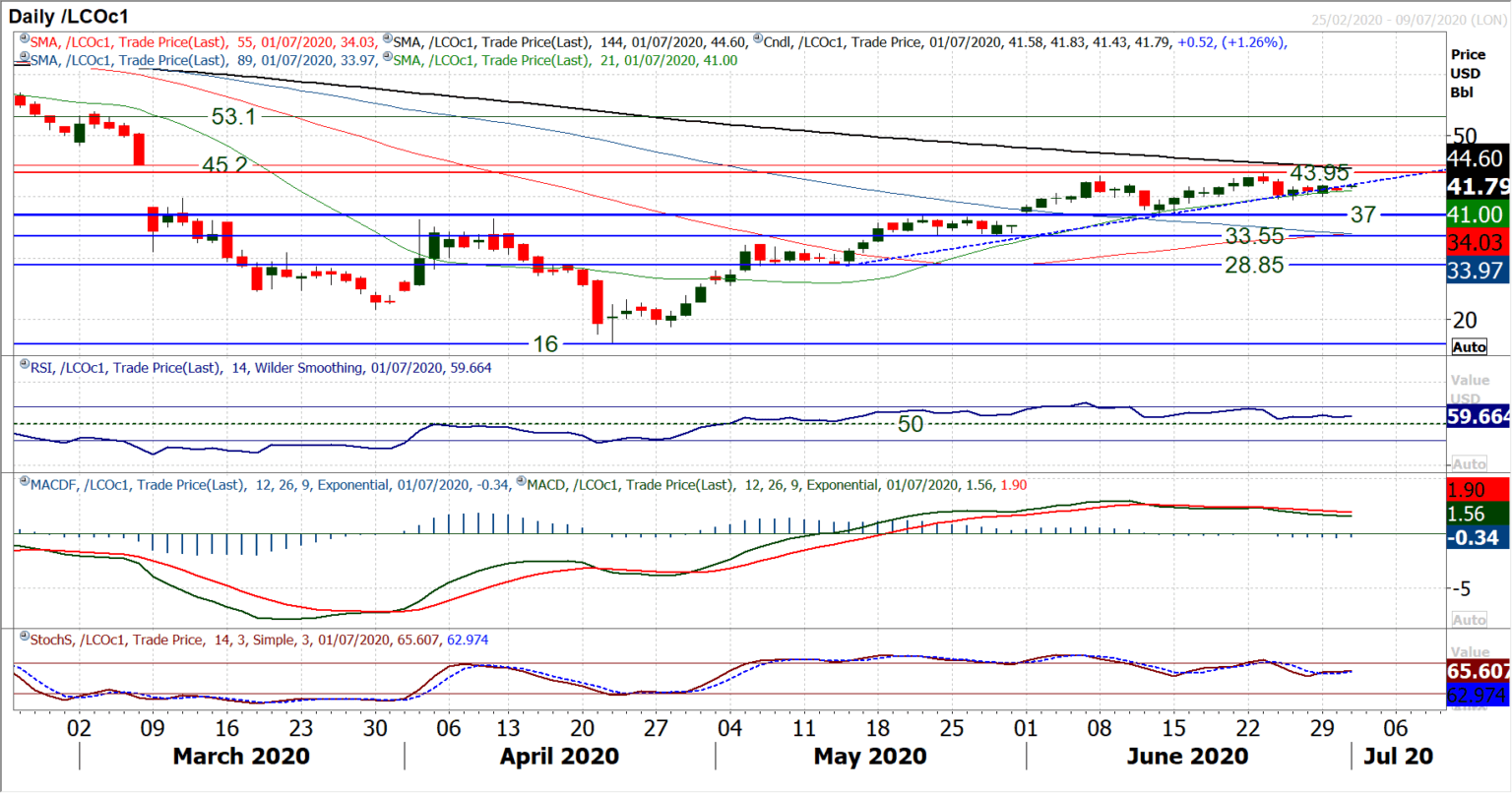 Another positive session has eased the negative pressure on the Dow and prevented a test of the key support band 24,765/24,845. The pick up came on the final day of a record quarter of gains for the Dow. Fuelled by record fiscal and monetary stimulus, the Dow added +17.8% in Q2. The key technical question now, is whether the market can hold on to the important support of the breakout above 24,765. Swinging back higher in the past two sessions is encouraging, but the bulls need to push on through the resistance of 26,315/26,610 which effectively now marks the top of a near term trading range. Over the course of the past couple of weeks of this range, the outlook has had a real mix of bullish, bearish and neutral daily candlesticks leaving none in overall control. Moving averages have flattened, whilst the daily RSI has oscillated between mid-40s to mid-50s. Until this 24,765/26,610 range is resolved there is little real direction to be taken. 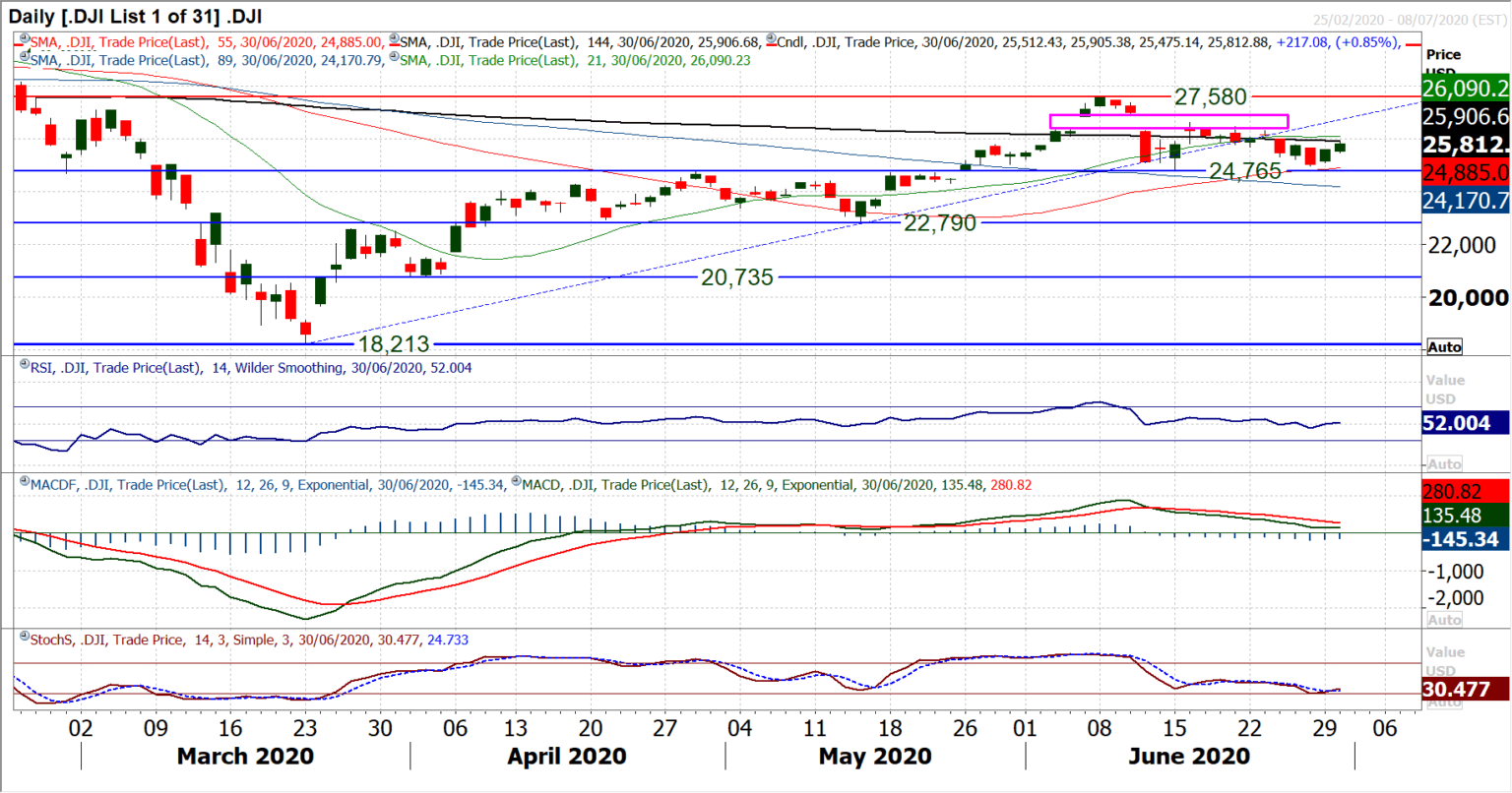