Let's not be confused by the temporary USDX weakness. Junior miners are faint and we can expect them to decline again soon.

April and May replay?

Although history doesn’t repeat itself to the letter, it rhymes. At least that’s what tends to happen in the financial markets.

In today’s analysis, I’ll explain why I think we’re about to see another example of the above in the case of junior mining stocks. There’s a technique that suggests one thing, but there’s also another that suggests that a 1-to-1 analogy wouldn’t be as good a fit, as a slight deviation from it.

So far, the situation in the GDXJ – a proxy for junior mining stocks – has been similar to what happened in the second half of April and early May. 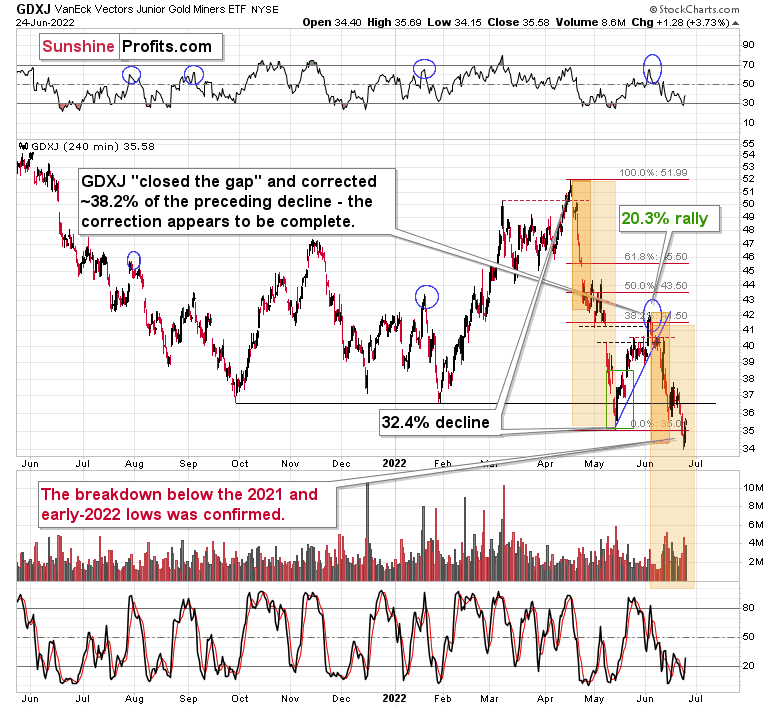 I even marked those similar periods with orange rectangles. We saw a small consolidation right after the end of the smaller rectangle, so history had already proved to be repeating itself.

However, let’s see what happened differently. This time, the initial decline (so the smaller rectangle) was not as steep as it was in April, and the following consolidation was shorter and narrower, too.

What does it tell us? No, I don’t mean the obvious “well, it’s not identical” here. The price moves are smaller either because the entire current short-term downswing is smaller (so, a smaller initial part and then a smaller final part would together create a smaller version of what we saw in April and May), or because this time, the structure of the price move is going to be a bit different.

If the latter is the case, it means that the decline can actually be bigger than what we saw in April-May, not smaller.

Looking at the charts featuring gold and the general stock market, we can tell that the latter of the above scenarios is more likely being realized.

Why? Because junior miners are weak relative to both: gold and the stock market. 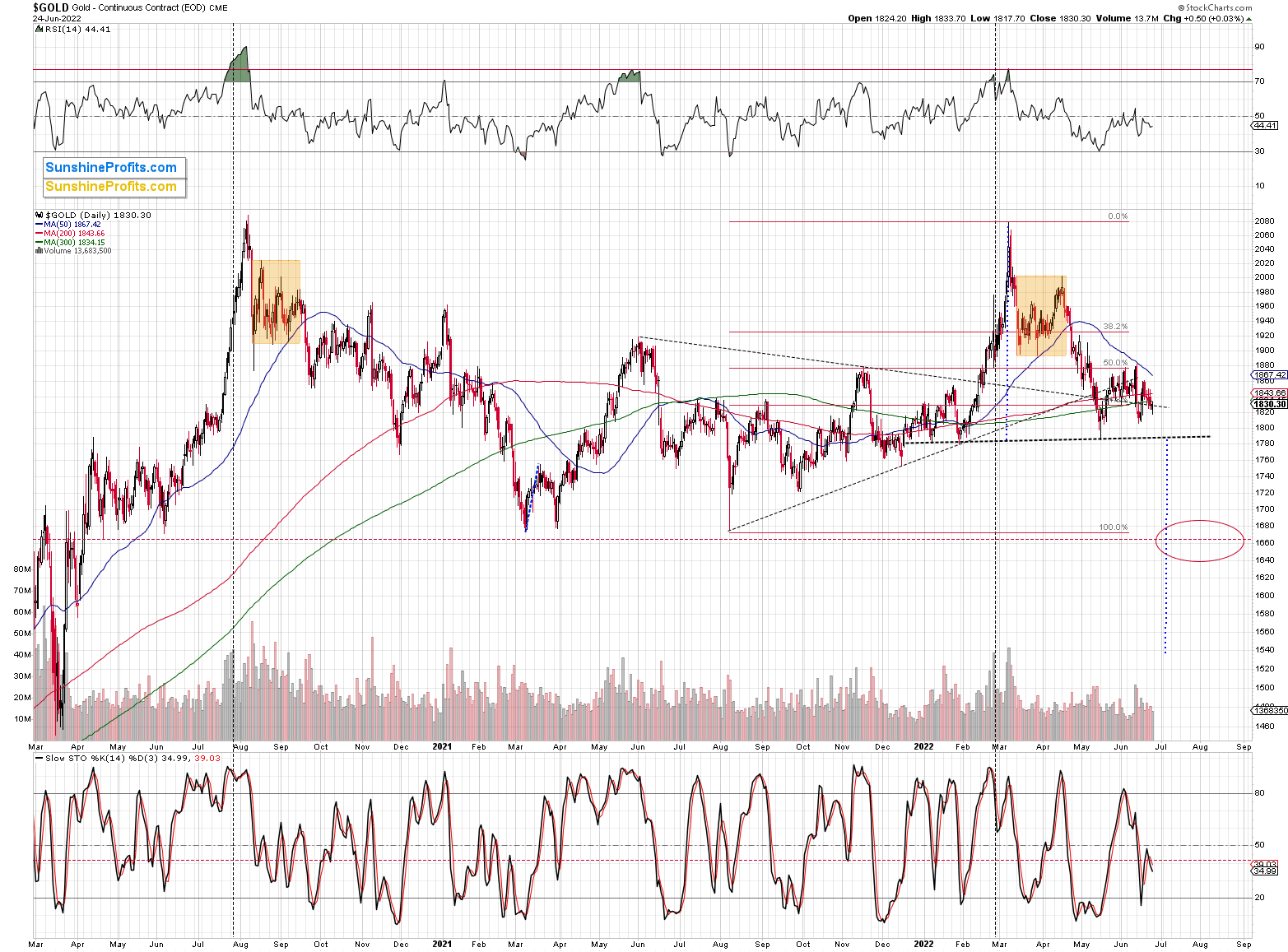 Nope, it’s not even particularly close to those levels. In fact, gold didn’t even move below its recent lows on Friday. 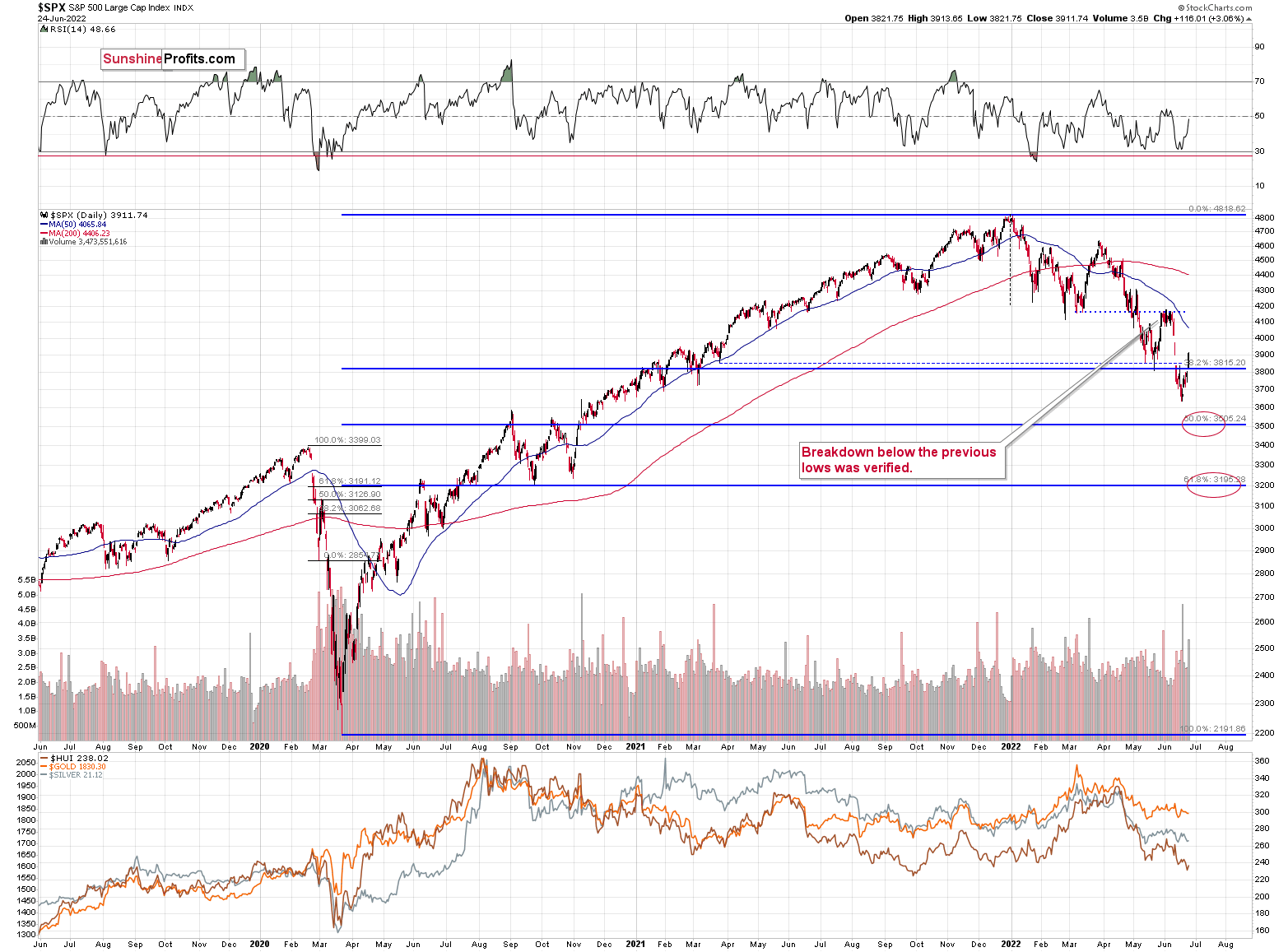 Actually, the general stock market rallied last week, and it invalidated its previous breakdown below the recent and 2021 lows. In fact, the S&P 500 Index was up by over 6% last week!

Was GDXJ up by over 6% too? No. It was down by over 3%, and profits on our short positions in juniors have increased once again.

The juniors are weak. Period

This tells us that it’s more likely that the deviation from the history that is not repeating itself to the letter will be toward something more bearish than the 1:1 analogy would be.

Does it complicate the outlook or analysis right now? Actually, it’s the opposite, because the above perfectly fits what was visible on broader charts all along! 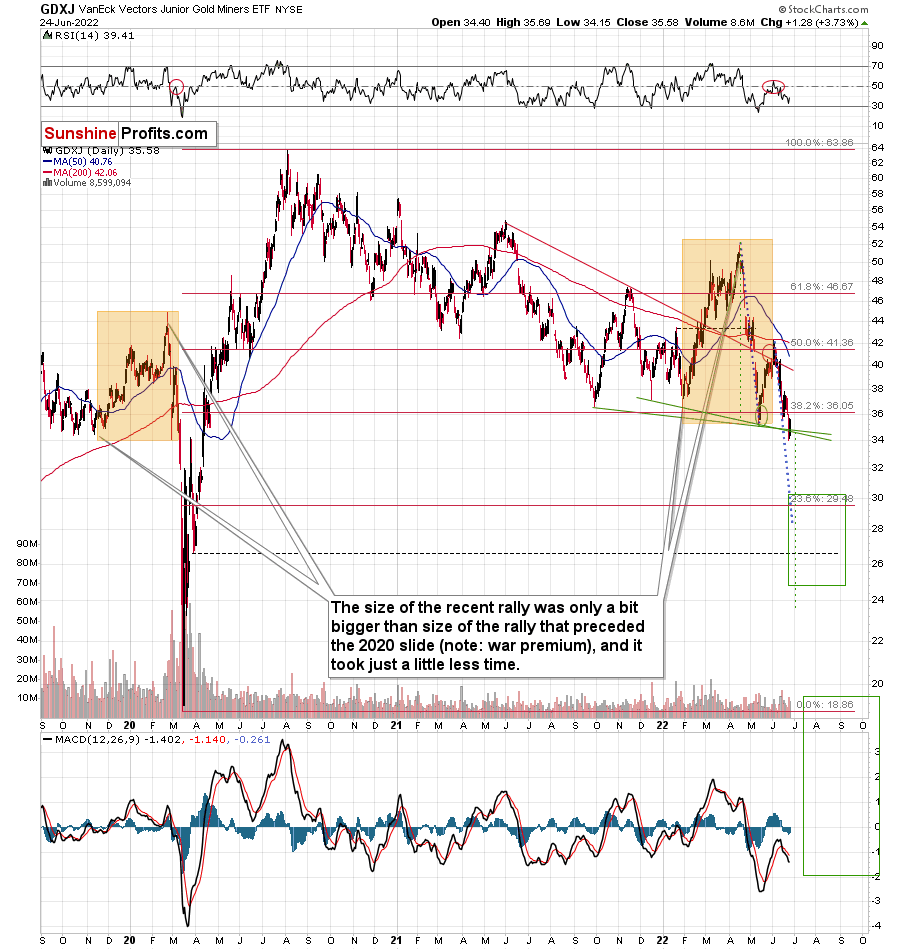 I previously explained that the next target for the GDXJ is likely around the $26-27 area.

That’s below the 1:1 analogy-based target that would be at “just” $28 as the blue, dotted lines would indicate.

Additionally, please note that the GDXJ is likely about to complete a head-and-shoulders pattern. Actually, it doesn’t matter if we use the late-2021 rally as the left shoulder or the late-2021 – early-2022 one, as the early-2022 rally is still the head, and the target based on the formation is the same in both cases. I marked the neck levels with green, solid lines, and I marked the downside target based on the potential formation with green, dashed lines – it’s slightly below $24.

Given the kind of weakness that we saw in junior miners recently, it seems that we won’t have to wait too long for the above to take place.

Speaking of time, the month is ending, and this might ring some bells… 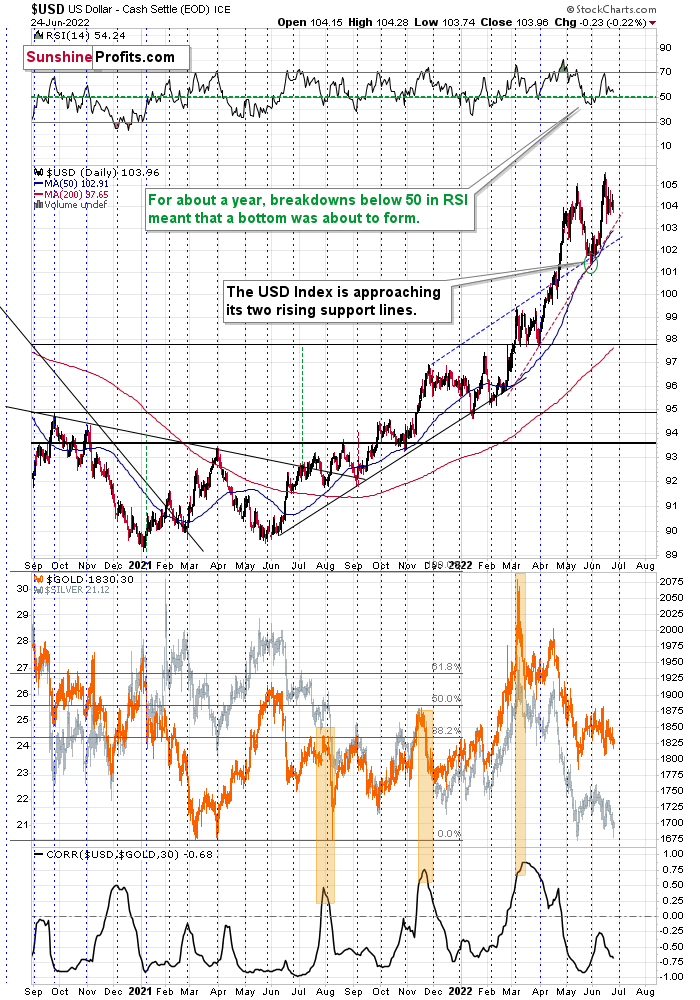 The USD Index tends to turn around at the turn of the month, usually bottoming out at that time. For example, that happened about a month ago and three months ago.

The month ends this Thursday. This tendency works on a near-to basis, so the exact bottom might or might not form on Thursday, but it doesn’t seem that we’ll need to wait for this bottom for long.

Based on junior’s weakness, we see that they just “can’t wait” to move lower, and the above USD Index chart tells us that they are likely about to get a bearish push.

Let’s not forget about the forest while looking at trees. The recent brief decline in the USD Index is likely just a handle of a cup-and-handle pattern that – when completed – is likely to take the USD Index much higher. 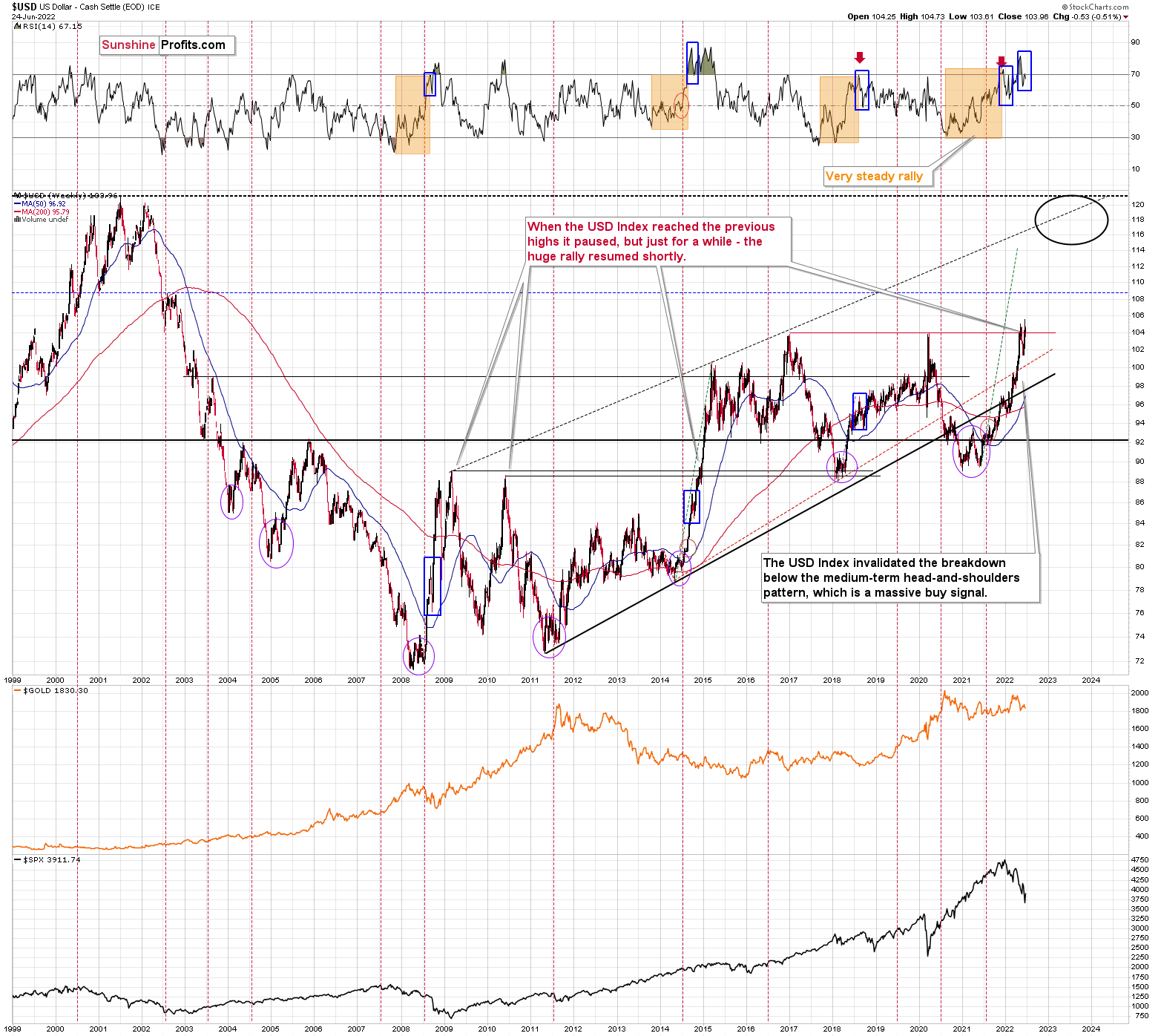 This means that once the USD Index breaks and confirms the breakout above the previous highs (and it’s likely to do so in the near future), it’s likely to soar.

This is bearish for the precious metals market – extremely so. Gold’s back-and-forth movement is likely about to end, just like junior miners are indicating. Gold’s next important stop (not the final end of the entire medium-term decline, though) is likely to be at its 2021 lows or close to them.