S&P 500 plunged on accelerated tapering intentions, and much of the risk-on sectors and commodities followed – even precious metals declined a little in sympathy. But where is the larger reasoning? If the Fed truly intends to taper faster in its belated fight against inflation, it‘s a question of not only markets throwing a tantrum, but of the real economy keeling over. Inflation is a serious problem, including a political one, and here come the Omicron demand-choking effects if the fear card gets played too hard.

Thankfully, reports indicate that the alleged variant is merely more contagious and has comparatively milder effects. That‘s how it usually turns out with mutations by the way – remember that before the number 30 is frequently thrown around, shuts off thinking including in the markets. The world‘s economic activity didn‘t come to a standstill with Delta, and it appears such a policy route won‘t be taken with Omicron either. That‘s why I was telling you on Monday that any inflation reprieve the scary news buys, would likely turn out only temporary. Unless the Fed decides to make it permanent, which is what I am doubting based on its track record and the more rocky landscape ahead that I talked about in a mid-Nov extensive article.

For now, the Fed‘s pressure is real, and premarket rallies that are sold into during regular sessions must be viewed with suspicion. It‘s not that we‘ve flipped into a (secular) bear market, but the correction is palpable and real – I‘m not looking for the habitual Santa Claus rally this year.

Big picture, the precious metals resilience is a good sign, and return of cyclical with commodities is the all-clear signal that I‘m however not expecting this or next week. Cryptos resilience is encouraging as much as various stock market ratios (XLY:XLP offers a more bullish view than XLF:XLU – I‘ve been covering these helpful metrics quite often through 2020), which makes me think we‘re in mostly sideways markets for now.

At least as I told you on Monday, the (rational/irrational) fears started getting ignored by the markets, meaning we‘re on a gradually improving track. 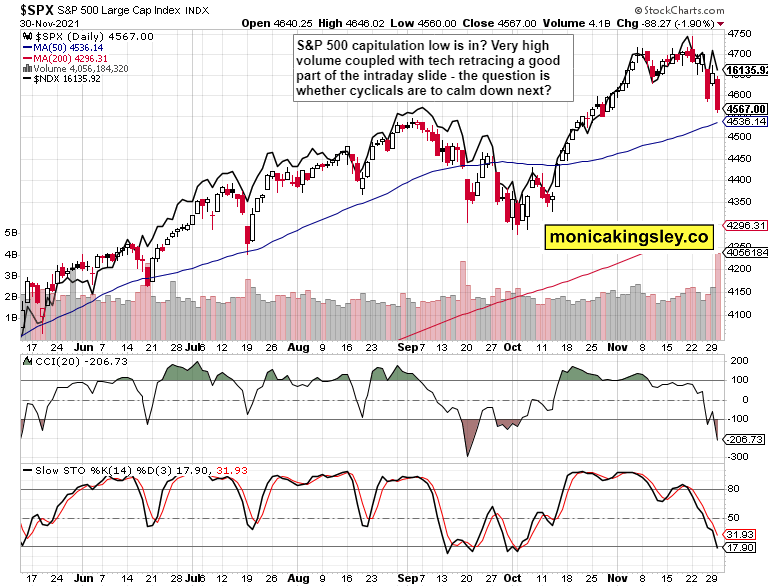 S&P 500 isn‘t out of the hot water, and it‘s still just a close in the 4670s that would mark the end of peril to me. The financial sector has to turn, strength has to come to small-caps simultaneously – the 500-strong index is still performing in a too risk-off way.

Precious metals are acting weak, but not overly weak. When the markets get fed up with having to bear the tapering/tightening (real and verbal) interventions, it would be gold and silver that rise first. 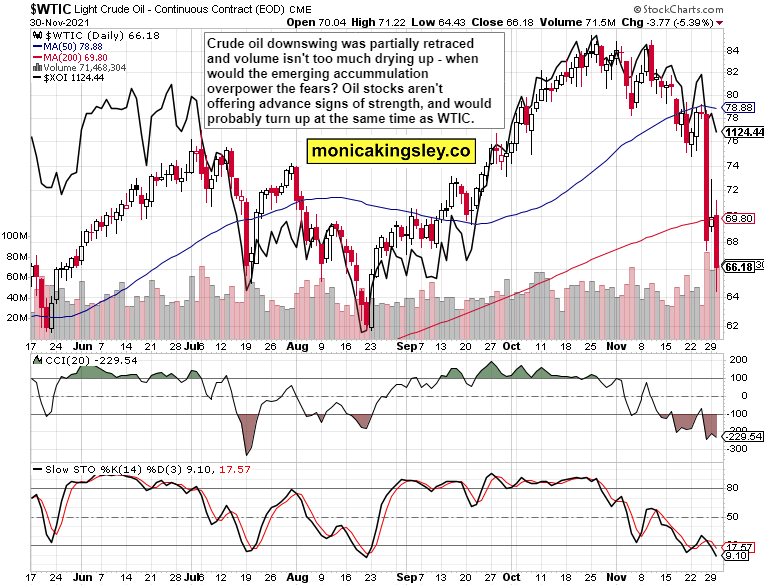 Crude oil turned out indeed weakest of the weak when fear overruled everything. Capitulation is a process, and it‘s quiet underway already in my view. The way black gold crashed, the way it would rise once the sky meaningfully clears. 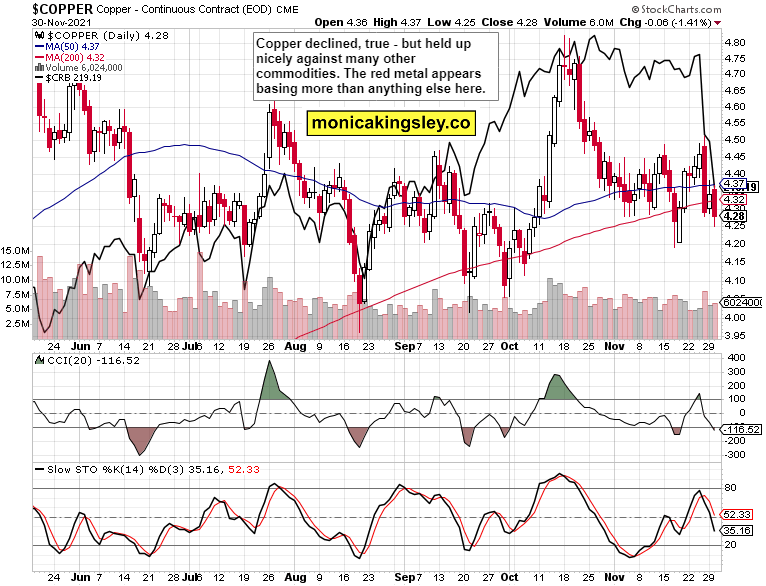 Copper weakness is what I don‘t trust here as other base metals did quite better. But again, yesterday was an overreaction to the Fed news that it would discuss speeding up taper. Just discuss. 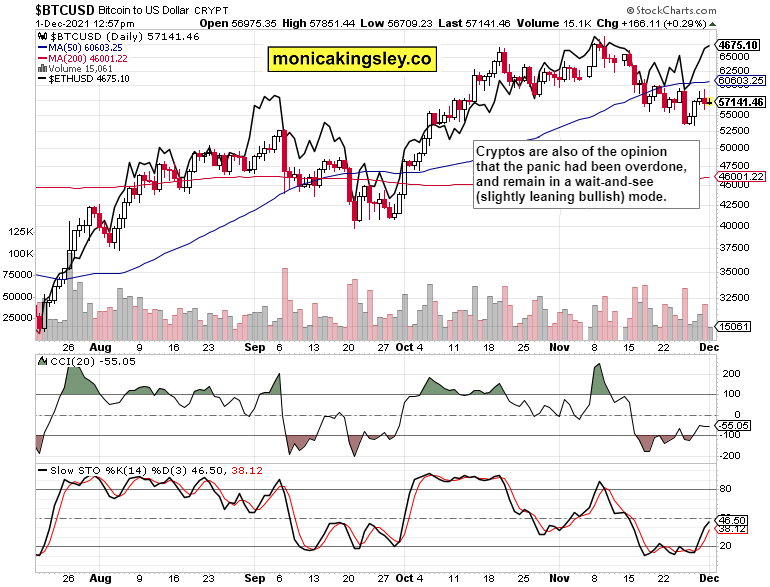 Bitcoin and Ethereum holding the relatively high ground, is a reason to think the risk-on scales would tip positive. While BTC is still correcting, I‘m looking for it to join Ethereum.

S&P 500, risk-on and commodities aren‘t yet on solid footing as Powell pronouncements outweighed the dissipating corona uncertainty. Either way, the effects on inflation would be rather temporary – inflation indicators clearly haven‘t topped yet as the implicit Fed admission of dropping the word temporary confirms. Once the tightening mirage gets a reality check in the economy and markets, look for precious metals to truly shine.

Gold price is fading the early bounce this Thursday, as the US dollar is seeing renewed buying interest amid the extension of risk-off flows. Dire Chinese economic outlook combined with Fed’s caution on a potential downturn keep investors on the edge.