The US dollar has been gaining ground against the euro for just over a year. From a 1.2372 close on April 18th last year to the 1.1180 finish on May 23rd the united currency has lost 9.6% versus the greenback.  For roughly half of that period April to November 2018 US interest rates were rising, for the second half they were falling.

Comparatively the US range of 55 basis points on the upside and 77 on the downside dwarf the German change of 6 points. Clearly the euro level is not being driven by interest rate differentials.

In effect the fall in US rates has blunted the dollar advantage but it has not taken over the relationship between the currencies. The macro-economic effects of the European economic slowdown and the potential damage from yet unsettled British departure continue to weigh heavily on the euro despite the shrinking rate advantage for the dollar. 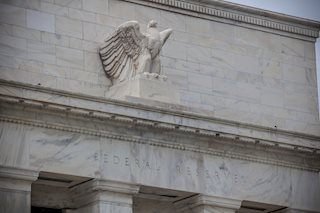 The week ahead is arguably the most important here at the start of 2020.  The Fed and the BOE meet. The US and the eurozone report initial estimates of Q4 19 GDP.  The eurozone also reports its preliminary estimate of January CPI.