Outlook: CPI today and retail sales Friday are the mover-and-shakers, and CPI today could bring drama. Inflation is expected at about 5.2% but the Fed’s narrative is that this is temporary spike and will fall back when special one-time factors fade away. The bond boys may be buying it but the general public is not. They think it will persist. The equity guys may agree with the public instead of the Fed, and this bodes ill for the indices.

We are not the only party out there who is genuinely afraid the Fed has it wrong about inflation being temporary. Bloomberg has been making the point relentlessly that supply constraints are here to stay for longer than a few months. 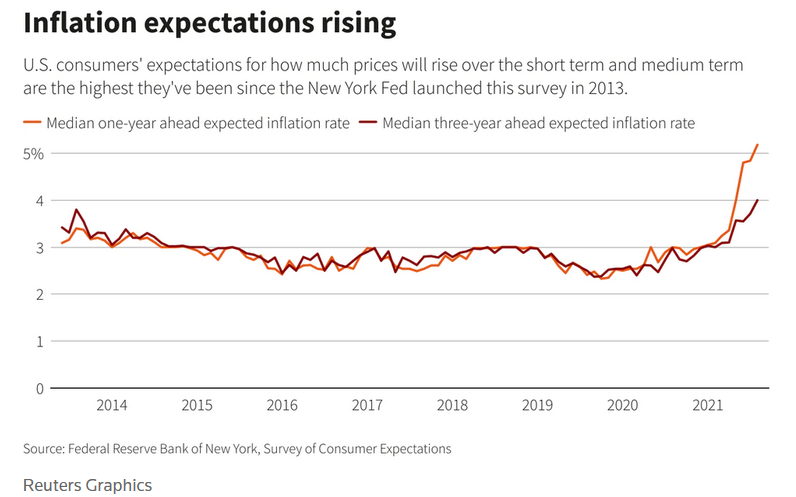 As we know, expectations can become a self-fulfilling prophecy when it comes to inflation—the expectation causes the inflation via spending behavior (like hoarding).  Sadly, people expect their earnings from wages and salaries not to keep pace and to rise only 2.5% in the one-year horizon. They also expect prices in key categories to exceed 5.2% in housing, energy, food, healthcare and more, and by a lot. WolfStreet finds a juicy nugget—those who are 40-60 expect higher inflation (4.8%) and those under 40 (4.5%). That’s experience speaking.

Experience also speaks when we consider oil prices. With the US inventory contracting and even with N. American output from fracking and shale at higher levels now that prices are over $70, it may not be enough. Over the summer some economists spoke of $100 oil. We would not be surprised. It goes without saying that the 9.2% rise in gasoline prices expected in the NY Fed survey is probably nowhere near enough. If food also goes up by the 7.9% forecast, that’s a big chunk of the weekly household budget and nurturing an inflation mentality that contributes to inflation.

As noted before, stagflation is looking less preposterous. So, what is the effect on the dollar? We are getting risk-on/risk-off whipsaws during the same day or two, so it’s hard to say just yet, but we think we smell a risk-off mood pending. Weirdly, the market can be risk-off in the face of expected rising interest rates and still favor the dollar. But it’s Tuesday and time for a pullback from whatever went before, so caution is called for.