The Pound has had a difficult time as Brexit negotiations have progressed and will continue to be susceptible to shocks from the continuing Brexit discussions, whether good or bad. Sterling is likely to see continued exchange rate volatility against its major currency partners, particularly the Euro, given the current political situation, and this is not likely to change anytime soon. In fact, we have at least another 15 months of this uncertainty, in turn taking its toll on currency rates.

How is the UK economy faring?

The economic situation in the UK, while showing some areas of slowing growth, remains largely positive. However, certain sectors of the UK economy consistently perform rather more robustly, such as manufacturing. New manufacturing orders – both domestically and internationally – are up, along with employment and productivity. Business confidence is high in the UK manufacturing sector and the majority of businesses have plans for growth and expansion in the coming year. UK exports have received support from a weaker Sterling and, despite rising inflationary pressures and poor exchange rates when buying products and services from overseas, the sector is enjoying success.

Retail sales saw a boost thanks to Black Friday and various special offers in the run up to December, contrasting with a slowdown in sales and a more muted start of seasonal spending. That is perhaps unsurprising, given the dragging effects of rising inflation and lack of real wage growth, consumers are undoubtedly feeling the financial squeeze. According to the latest figures from the Confederation of British Industry (CBI), there has been a steady improvement in sales up to mid-December, which bodes well for a more productive festive shopping season.

In contrast, consumer confidence has reached new lows in recent months, particularly following the Bank of England’s interest rate increase. The December 2017 figure was the lowest seen yet this year, at -13, a significant fall in the index from the figure of -7 that was posted at the same time last year. Confidence has remained muted throughout the year; in part due to uncertainty following the Brexit vote, and has fallen as consumers are having to tighten their belts in the face of rising living and energy costs, combined with concerns about wage growth.

The construction sector has also been struggling, as Brexit uncertainty continues to affect business decisions, pricing of raw materials and delays investment. Volatile currency markets have also played their part in this sector, although reliance on key infrastructure and large-scale construction projects on the commercial side of the industry has left residential home building holding the fort.

The decision by the International Monetary Fund (IMF) to downgrade the UK’s growth prospects has further pounded Sterling, with forecasts being lowered from 1.7% to 1.6%, then a lower figure still predicted for 208 of 1.5%. The caveat to this is that the IMF is not noted for its accurate forecasting.

There has been a small silver lining, however, as UK public finances have improved somewhat year-on-year, with public sector net borrowing falling from £8.9 billion a year ago to £8.7 billion in the November 2017 figures.

How is the Eurozone performing?

Meanwhile, the Eurozone has revised economic growth forecasts upwards in response to increased activity and cross-sector economic growth in recent months, now expecting 2.4% GDP growth this year, as opposed to its original prediction of 2.2%. This reflects continued confidence in European economies.

The European Central Bank (ECB) has kept interest rates the same and is tapering the Quantitative Easing (QE) programme from £60 billion to £30 billion the New Year. However, concerns continue about inflation remaining below the target 2%, and ECB president, Mario Draghi, has not committed to reaching the inflation goal by the desired time, which points to a Eurozone economy that, while recovering and performing strongly, is not yet robust enough to wind down the programme altogether.

The Sterling – Euro exchange rate is barricaded in a band between €1.11 and €1.1450 at the moment. So buyers of Euros should be looking at that upper end in the short term. If your costed price is €1.11 or above, it may be worth protecting that with a Stop loss order or similar currency trade. A break above €1.15 should herald a larger spike to €1.17 or beyond. 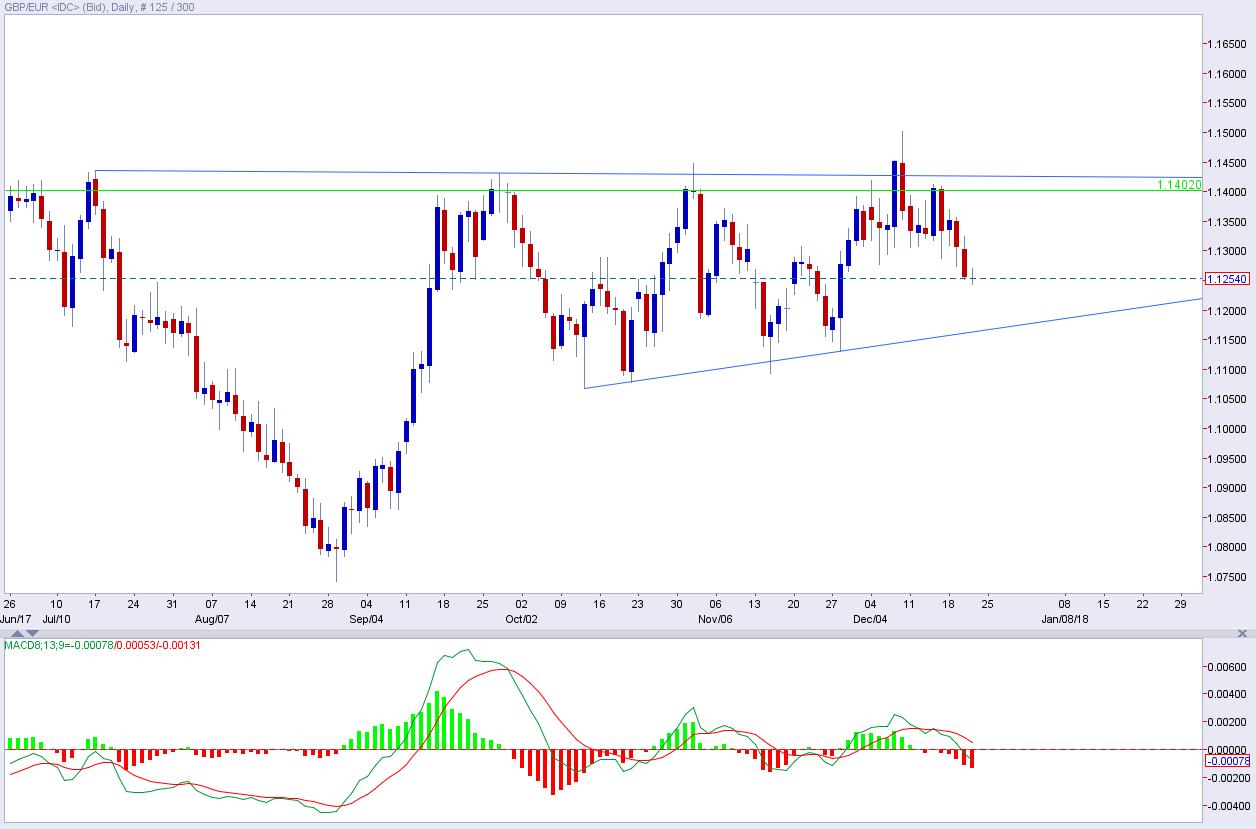