Gold managed to build on the previous week’s gains and climbed to $1,810 on Monday but staged a deep correction on Tuesday with investors refraining from committing to large positions ahead of key events. After fluctuating in a relatively tight range near $1,800, XAU/USD spiked to $1,810, once again, on Thursday but ended up closing the week in the negative territory below $1,780 following Friday’s plunge.

Falling US Treasury bond yields helped XAU/USD preserve its bullish momentum at the start of the week. Although the benchmark 10-year US T-bond yield continued to push lower on Tuesday and Wednesday, the flattening yield curve with the 2-year T-bond yield surging higher helped the greenback gather strength and limited gold’s upside potential.

The data from the US showed on Wednesday that Durable Goods Orders declined by 0.4% on a monthly basis in October. This reading came in better than the market expectation for a decline of 1.1% but failed to trigger a noticeable market reaction.

On Thursday, the US Bureau of Economic Analysis (BEA) announced that the Real Gross Domestic Product (GDP) expanded at an annual rate of 2% in the third quarter. With this print falling short of analysts’ estimate for a growth of 2.7%, the dollar came under heavy selling pressure. Underlying details of the report, however, showed that the sharp decline witnessed in the motor vehicle output had a large negative impact on the headline GDP figure. Moreover, the weekly report published by the US Department of Labor revealed that there were 281,000 initial claims for unemployment benefits during the week ending October 23. Hence, the dollar selloff softened heading into the last day of the week and XAU/USD retreated to $1,800 area.

Meanwhile, the European Central Bank left its policy settings unchanged and didn’t offer any details regarding the planned adjustments to the Pandemic Emergency Purchase Programme (PEPP). During the press conference, ECB President Christine Lagarde acknowledged that inflation in the euro area would remain high for longer than initially anticipated and sounded relatively optimistic regarding the economic outlook. Commenting on the market pricing of an ECB rate hike in the second half of 2022, "our analysis certainly does not support that the conditions of our forward guidance are satisfied at the time of liftoff as expected by markets, nor anytime soon thereafter," Lagarde said. These comments did little to nothing to alter the market’s view and a 10 basis points rate hike was fully priced in for July 2022 at the time of press. Although the greenback weakened against the shared currency, the steep drop seen in the XAU/EUR pair capped XAU/USD gains.

Ahead of the weekend, gold suffered heavy losses amid month-end flows and rising US T-bond yields. The US Dollar Index, which tracks the dollar’s performance against a basket of six major currencies, erased Thursday’s losses in a decisive rebound. The BEA reported that the Core Personal Consumption Expenditures (PCE) Price Index stayed unchanged at 3.6% on a yearly basis in September.

The ISM Manufacturing PMI will be featured in the US economic docket on Monday. Ahead of the highly-anticipated FOMC meeting later in the week, an upbeat PMI print could help investors forget the disappointing GDP report and boost the dollar. On the other hand, a dismal PMI survey could force participants to stay on the sidelines while they try to figure out whether the Fed will wait until December before starting to reduce asset purchases.

The ADP Employment Change data and the ISM Services PMI report are likely to be ignored before the Fed announces its policy decisions at 1800 GMT.

If policymakers decide to go ahead with the taper in November and adopt a hawkish tone, the greenback could outperform its rivals and gold’s near-term outlook could turn bearish. It will be interesting to see if the Fed will remain focused on the inflation outlook rather than the loss of growth momentum in the third quarter. In case FOMC Chairman Jerome Powell downplays inflation concerns and sounds concerned about the Q3 GDP data, the dollar could come under renewed selling pressure and allow XAU/USD to turn north.

On Thursday, the Bank of England will announce its Interest Rate Decision. Although this event is unlikely to have a direct impact on gold, it could affect the dollar’s market valuation and ramp up the market volatility.

Finally, the US Bureau of Labor Statistics will release the October jobs report. The market consensus points to an increase of 425,000 in Nonfarm Payrolls following the disappointing print of 194,000 in September. Following the FOMC meeting, however, the labour market data is unlikely to alter the market theme by itself. Nevertheless, a strong NFP figure could still support the greenback and vice versa.

With Friday’s sharp decline, gold fell below the 200-day, 100-day and 50-day SMAs. Additionally, the Relative Strength Index (RSI) indicator on the daily chart retreated below 50, suggesting that bearish momentum is picking up steam. XAU/USD seems to have broken below the ascending trend line that has been acting as support since the beginning of October.

On the downside, the next support is located at $1,770 (former resistance, Fibonacci 61.8% retracement of the April-June uptrend) ahead of $1,750 (static level). A daily close below the latter could open the door for additional losses toward $1,730.

On the flip side, strong resistance seems to have formed at $1,790 (100-day SMA, 200-day SMA) before $1,800 (psychological level and $1,810 (static level). The weekly price action showed that $1,810 is a key hurdle and the near-term technical outlook could turn bullish if buyers manage to lift XAU/USD above that level.

The FXStreet Forecast Poll points to a slightly bullish bias in the near term with the average one-week target sitting at $1,794. 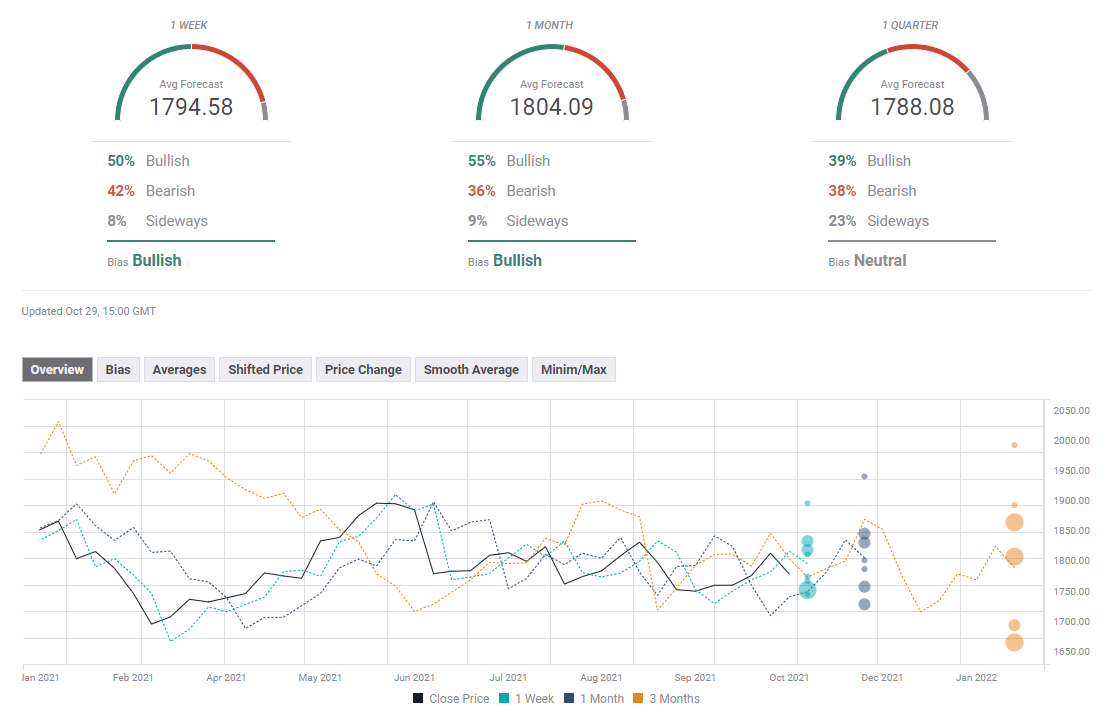