Gold has reversed its direction following a drop below $1,800 at the beginning of the week and ended up snapping a four-week losing streak. Technical indicators suggest that XAU/USD could find it difficult to continue to push higher next week but the US Treasury bond yields’ reaction to the FOMC’s May meeting minutes should drive the pair's action later in the week.

The risk-averse market environment at the start of the week helped the dollar continue to gather strength and caused XAU/USD to drop to its lowest level since late January at $1,786. The data from China revealed that Retail Sales and Industrial Production contracted by 11.1% and 2.9%, respectively, on a yearly basis in April, reminding investors of the negative impact of the country’s zero-COVID policy on the economy. Reflecting the greenback’s impressive performance, the US Dollar Index reached its highest level since late-2002.

On Tuesday, the city of Shanghai announced that it had achieved zero coronavirus infections across all districts and reaffirmed that they will start easing restrictions in a gradual way from May 21 with an aim to have the lockdown completely lifted by June 1. Although this development helped gold stage a rebound, rising US Treasury bond yields capped XAU/USD’s upside. The US Census Bureau reported that Retail Sales rose by 0.9% on a monthly basis in April, compared to the market expectation of 0.7%. Meanwhile, FOMC Chairman Jerome Powell reiterated that there was broad support from Fed policymakers for 50 basis points rate hikes at the next two meetings.

Disappointing earnings figures and dismal sales outlooks from large retailers in the US, including Walmart, Target and Kohl’s, triggered an intense flight to safety on Thursday. Despite risk aversion, the dollar struggled to find demand amid slumping US yields and gold rose nearly 1.5% and registered its largest one-day gain since early March. Moreover, XAU/USD climbed above the key 200-day SMA during Thursday’s rally, further attracting technical buyers.

In the absence of high-tier macroeconomic data releases and fundamental headlines, gold consolidated its weekly gains on Friday and ended up posting modest daily losses. Regardless, XAU/USD posted weekly gains for the first time since mid-April.

The S&P Global will release the flash PMI reports for the US on Tuesday. These publications are expected to show that business activity continued to expand at a robust pace both in the service and manufacturing sectors in early May. In case they point to rising input prices and the difficulties companies are facing to fill vacant positions, however, the dollar could hold its ground and weigh on XAU/USD.

On Wednesday, the FOMC will publish the minutes of its May meeting, at which the Fed decided to hike its policy rate by 50 basis points. During the press conference, "a 75 basis points (bps) increase is not something that the committee is actively considering,"  FOMC Chairman Powell said. If the minutes reveal that some policymakers were open to the idea of bigger-than-50 bps rate increases, this could be seen as a hawkish development and boost yields, in turn causing gold to turn south.

On the other hand, if Fed officials voiced their willingness to hike the policy rate by 50 bps at the next two meetings. The publication could suggest that policymakers might look to take a cautious stance afterwards to see the impact of higher rates on inflation and consumer activity. In such a scenario, the greenback selloff could pick up steam and pave the way for an extended rebound in XAU/USD.

The US economic docket will feature the first-quarter GDP growth and the Personal Consumption Expenditures (PCE) Price Index data in the second half of the week. The GDP print is unlikely to trigger a noticeable market reaction as it will be a revision to the US Bureau of Economic Analysis’ first estimate, which showed that the economy contracted at an annualized pace of 1.4%.

Core PCE inflation is expected to retreat to 4.6% on a yearly basis in April from 5.2% in March. In case this data comes in line with the market forecast, or even lower, gold is likely to gain traction ahead of the weekend and vice versa.

In the meantime, investors will continue to keep a close eye on coronavirus-related developments in China. Positive headlines on that front should help gold gather strength as they would point to an improving demand outlook. 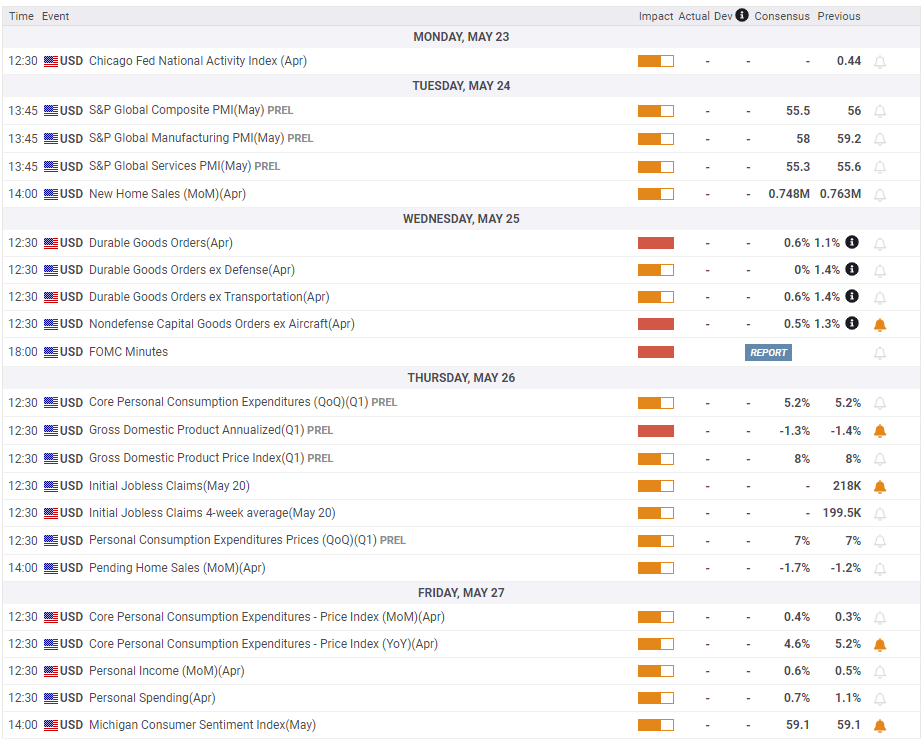 On the daily chart, the Relative Strength Index (RSI) indicator stays below 50 despite this week's rebound, suggesting that the pair's recent advance was part of a technical correction. Additionally, the pair is yet to confirm the 200-day SMA, which is currently located at around $1,840.

In case gold starts using $1,840 as support, next significant resistance aligns at $1,850, where the Fibonacci 23.6% retracement of the latest downtrend is located. A daily close above that level could be seen as a bullish development and open the door for additional gains toward $1,870 (Fibonacci 38.2% retracement).

On the flip side, sellers could come back into play if gold fails to clear the 200-day SMA. In that scenario, $1,810 (static level) aligns as the next bearish target before $1,800 (psychological level).

The FXStreet Forecast Poll shows that a large portion of experts see gold moving sideways next week. The average target of $1,850 suggests there is some room for additional gains in the near term. There is a bullish tilt in both the one-month and one-quarter outlooks. 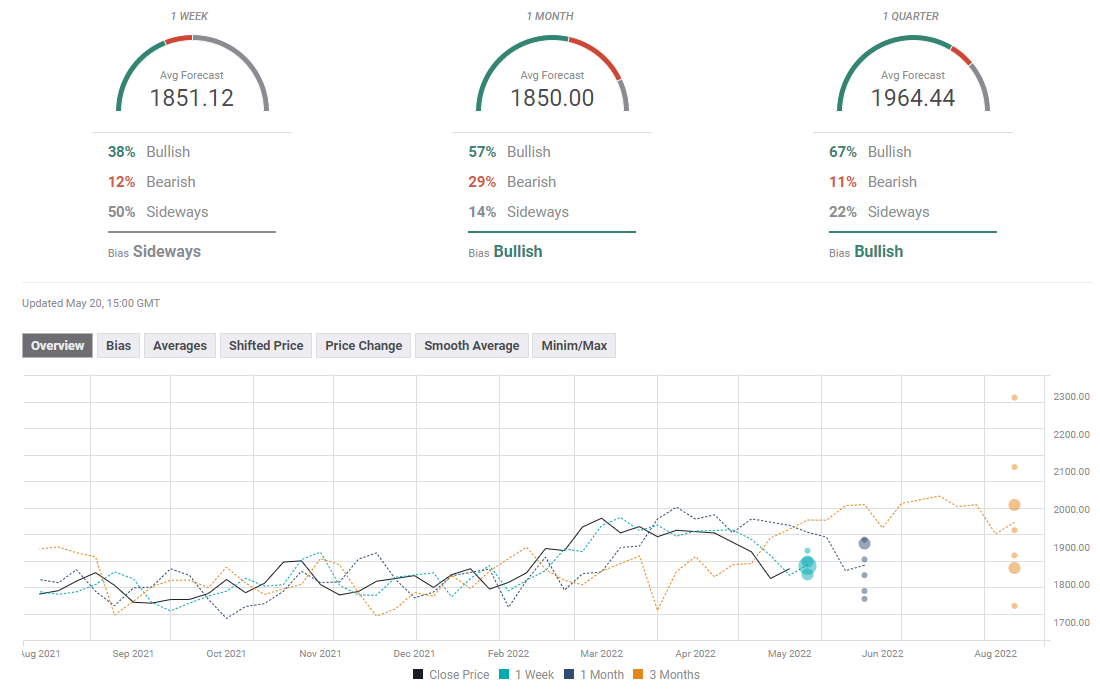