The XAU/USD pair started the week in a relatively calm manner and traded in a tight range above $1,800 on Monday and Tuesday. With the greenback gathering strength against its rivals on Wednesday, the pair broke below the critical $1,800 level and sellers started to dominate the price action. On Friday, XAU/USD touched its lowest level since early July at $1,760 but turned north in the second half of the day as the USD came under heavy selling pressure. Gold snapped a six-day losing streak on Friday and closed around $1,780 but lost more than 2% on a weekly basis.

On Monday, trading conditions thinned out amid the Presidents Day holiday in the US and the Chinese New Year holiday. However, the Nikkei 225 Index rose nearly 2% and climbed to its highest level in nearly 30 years, while major European equity indexes posted impressive gains. The risk-positive market environment didn’t allow gold to find demand but weighed on the USD as well and forced XAU/USD to fluctuate in a tight range.

Although risk flows continued to dominate the financial markets on Tuesday, the sharp upsurge witnessed in the US Treasury bond yields helped the USD stay resilient against its rivals and caused XAU/USD to lost more than 1% on the day.

On Wednesday, the upbeat macroeconomic data releases from the US provided an additional boost to the greenback and XAU/USD extended its slide. The US Census Bureau reported that Retail Sales in January increased by 5.3% and beat the market expectation for an increase of 1% by a wide margin. Furthermore, Industrial Production in the same period expanded by 0.9%, compared to analysts’ estimate of 0.5%. Finally, the FOMC’s January meeting minutes showed that policymakers remained cautiously optimistic about the economic outlook. Regarding inflation, the statement revealed that policymakers stressed the importance of distinguishing between one-time relative price changes and the underlying inflation trend.

In the second half of the week, the USD failed to preserve its bullish momentum and the US Dollar Index closed in the negative territory on Thursday and Friday. The weekly data published by the US Department of Labor showed that Initial Jobless Claims rose to 861K from 848K and the Federal Reserve Bank of Philadelphia reported that the Manufacturing Index fell to 23.1 in February from 26.5 in January. The IHS Markit's preliminary Manufacturing and Services PMI reports reaffirmed that the business activity in the US' private sector continued to expand at a robust pace in February but the strong data failed to help the buck. Nevertheless, XAU/USD's rebound was limited ahead of the weekend.

The IFO’s Current Assessment and Expectations surveys for Germany will be the only data that could potentially impact risk sentiment at the start of the week.

On Tuesday, the Conference Board’s Consumer Confidence Index from the US will be watched closely by market participants. As we have seen in the past couple of weeks, a positive reading could help the USD gather strength and force XAU/USD to remain on the back foot.

Germany’s Destatis will release the fourth-quarter Gross Domestic Product (GDP) report on Wednesday. Similarly, the US Bureau of Economic Analysis will publish its second estimate of the fourth-quarter GDP growth, which is expected to come in at 4.2% on a yearly basis, on Thursday before releasing the Personal Income and Personal Spending figures on Friday.

In the meantime, investors will keep a close eye on the US Treasury bond yields. Expectations for a sharp increase in inflation have been driving the yields higher and supporting the USD. Hence, Friday’s Core Personal Consumption Expenditures (PCE) Price Index, the Federal Reserve’s preferred gauge of inflation, will be next week’s key data to watch. The market consensus points out to an annual increase of 1.4% and a higher-than-expected print could make it difficult for XAU/USD to gain traction. 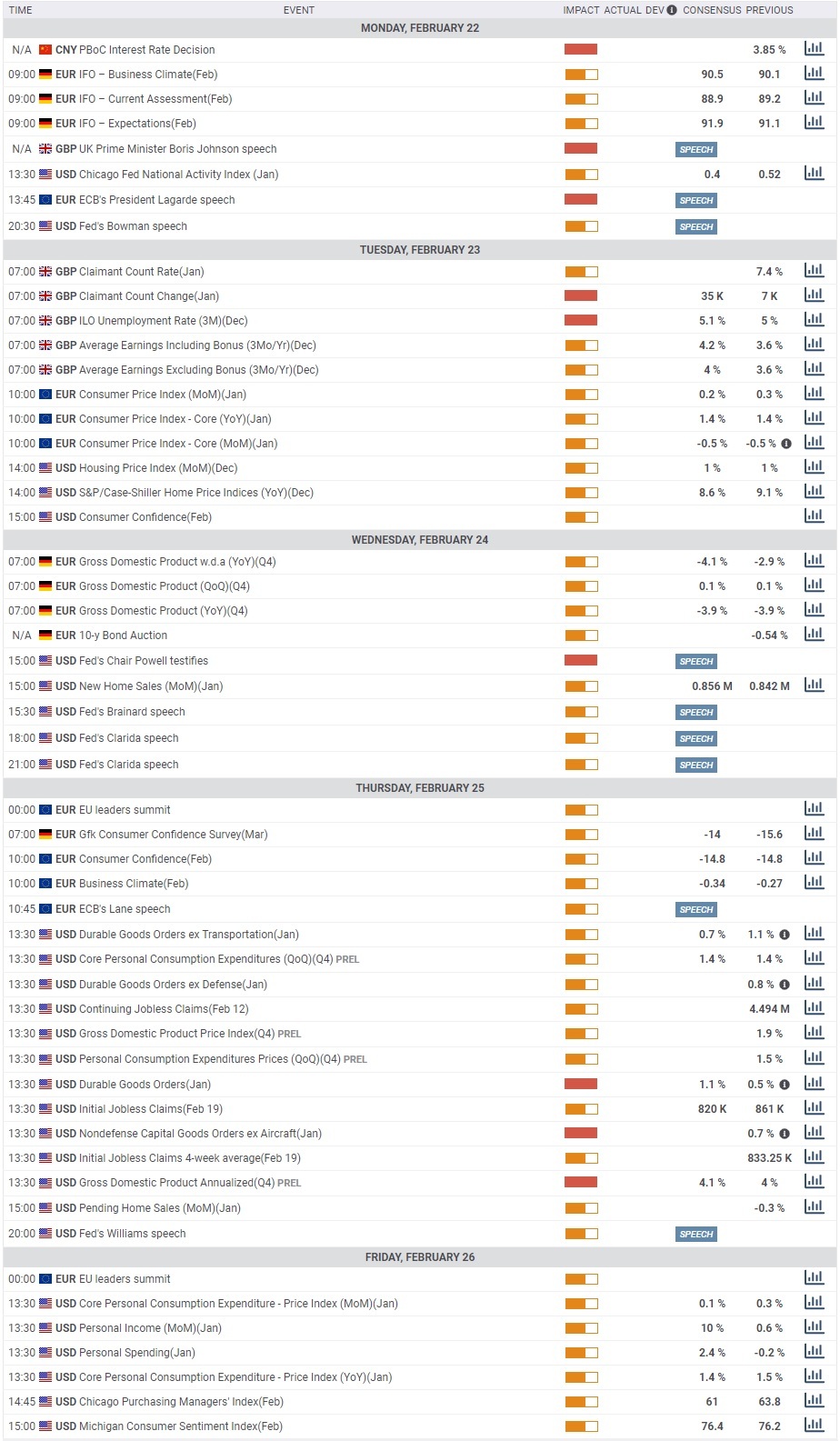 On the daily chart, the Relative Strength Index (RSI) indicator recovered modestly in the second half of the week and pulled away from the oversold area. However, the RSI remains below 50, suggesting that the latest move was a technical correction and the bearish pressure is likely to remain intact in the near-term.

On the upside, the descending trend line coming from early January is currently forming strong resistance around $1,800 psychological level. As long as this line remains intact, sellers will look to dominate gold's price action. The next technical hurdle is located at $1,820 (20-day SMA) ahead of $1,826 (static level).

The immediate support, on the other hand, could be seen at $1,770. XAU/USD tested this level twice earlier in the week but failed to break it. A daily close below that support is likely to open the door for additional losses toward $1,760 (multi-month lows) and $1,750 (former resistance from May/June 2020).

In the short-term, the FXStreet Forecast Poll shows that 60% of experts remain bearish on a one-week view with an average target of $1,775. On a one-month view, the average price target has declined to $1,769 from $1,815 last week, pointing out to a bearish shift in that time frame as well. 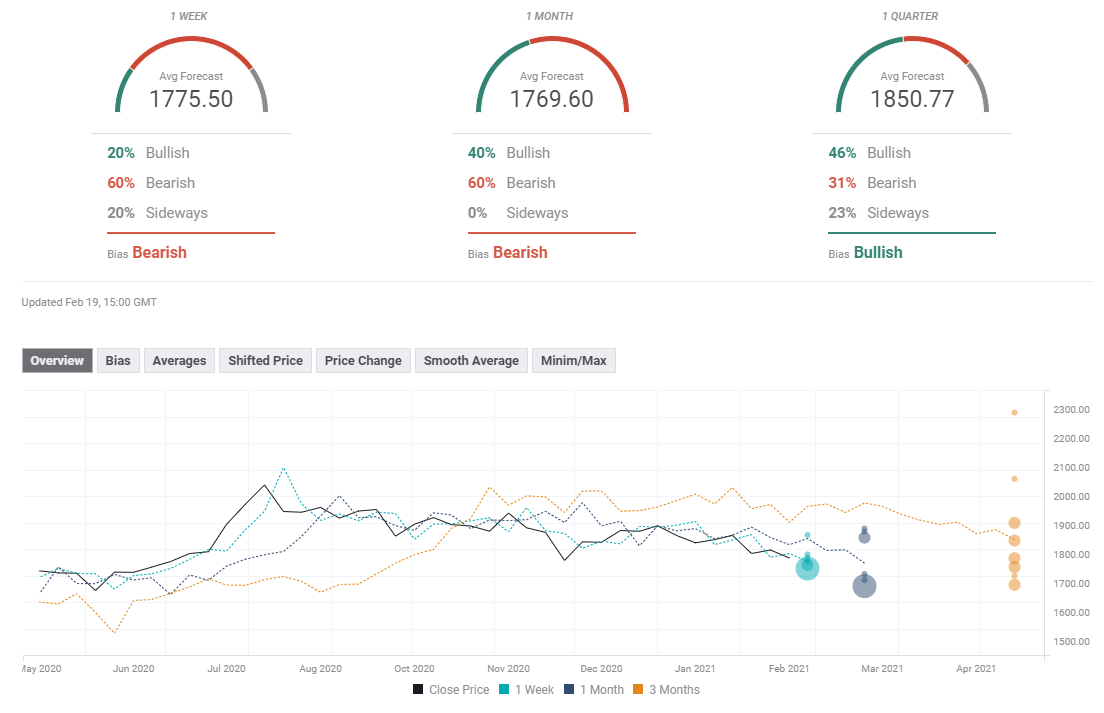