Gold started the week under modest bearish pressure and closed in negative territory on Monday and Tuesday. Following an uninspiring recovery attempt toward $1,800 on Wednesday, XAU/USD struggled to hold its ground and touched its lowest level in a month @1,761. Although the disappointing November jobs report from the US triggered a rebound initially on Friday, gold failed to attract buyers and finished the third straight week deep in the red.

Safe-haven flows dominated the financial markets ahead of the weekend amid renewed fears over the Omicron variant causing a slowdown in global economic activity. The market mood improved at the start of the week, however, with confirmed Omicron cases in Europe and the UK showing mild symptoms. The yellow metal couldn’t find demand as a safe haven and US Treasury bond yields edged higher.

On Tuesday, markets, once again, turned risk-averse after the CEO of Moderna said that current vaccines were likely to be ineffective against the new variant and added that it would take “months before pharmaceutical companies can manufacture new variant-specific jabs at scale.” Gold managed to stage a decisive rebound and climbed above $1,800. However, FOMC Chairman Jerome Powell’s hawkish remarks provided a boost to the greenback and forced XAU/USD to erase its daily gains.

While testifying before the US Senate Banking Committee, Powell said it would be appropriate to consider wrapping up the asset taper a few months sooner than initially planned. Regarding the Omicron variant, Powell said that they need to see more data to assess its potential impact on economic activity. Finally, the chairman noted that it was time to retire the term “transitory” when defining inflation in the US.

On Wednesday, the data from the US revealed that employment in the private sector increased by 534,000. Additionally, the ISM Manufacturing PMI arrived at 61.1 in November, showing that the business activity in the manufacturing sector continued to expand at a robust pace. The Prices Paid component of the PMI survey edged lower to 82.4 from 85.7.

In the absence of high-tier macroeconomic data releases, the dollar didn’t have a hard time outperforming its rivals and XAU/USD slumped to its lowest level since early November at $1,761. Meanwhile, Cleveland Fed President Loretta Mester voiced her support for a quicker taper so the Fed can have the flexibility to change the policy rate sooner if needed.

The US Bureau of Labor Statistics reported on Friday that Nonfarm Payrolls (NFP) increased by 210,000 in November, missing analysts' estimate of 550,000 by a wide margin. Underlying details of the publication revealed that wage inflation, as measured by the Average Hourly Earnings, remained steady at 4.8% on a yearly basis. Nevertheless, investors don't seem to think that the dismal NFP print will alter the Fed's tapering outlook with the US Dollar Index and the benchmark 10-year US Treasury bond yield easily returning to pre-release levels following a knee-jerk reaction.

The Fed will go into the blackout period on Saturday, December 4, and we will not get any comments from policymakers until December 16. However, market participants will keep a close eye on developments surrounding the Omicron variant. On Friday, "we are confident that vaccinated people and those with booster shots will have sufficient protection against severe disease,” said BioNTech CEO Ugur Sahin. As long as investors remain confident that Omicron will not put major pressure on the health care system even if vaccines need to be adjusted, the Fed is likely to remain on its tightening path and limit gold’s recovery attempts.

The economic docket won’t be featuring any high-impact data releases in the first half of the week and the risk perception could continue to drive financial markets.

On Friday, the US Bureau of Labor Statistics will release Consumer Price Index (CPI) figures for November. The annual core CPI is expected to edge lower to 4.3% from 4.6% in October. When the October CPI print surpassed the market expectation, XAU/USD shot higher with the initial reaction. We could see a similar reaction in case the report reveals that the CPI continued to increase in November. A hot inflation reading, however, would also provide a boost to the dollar, not allowing gold to capitalize on the data. 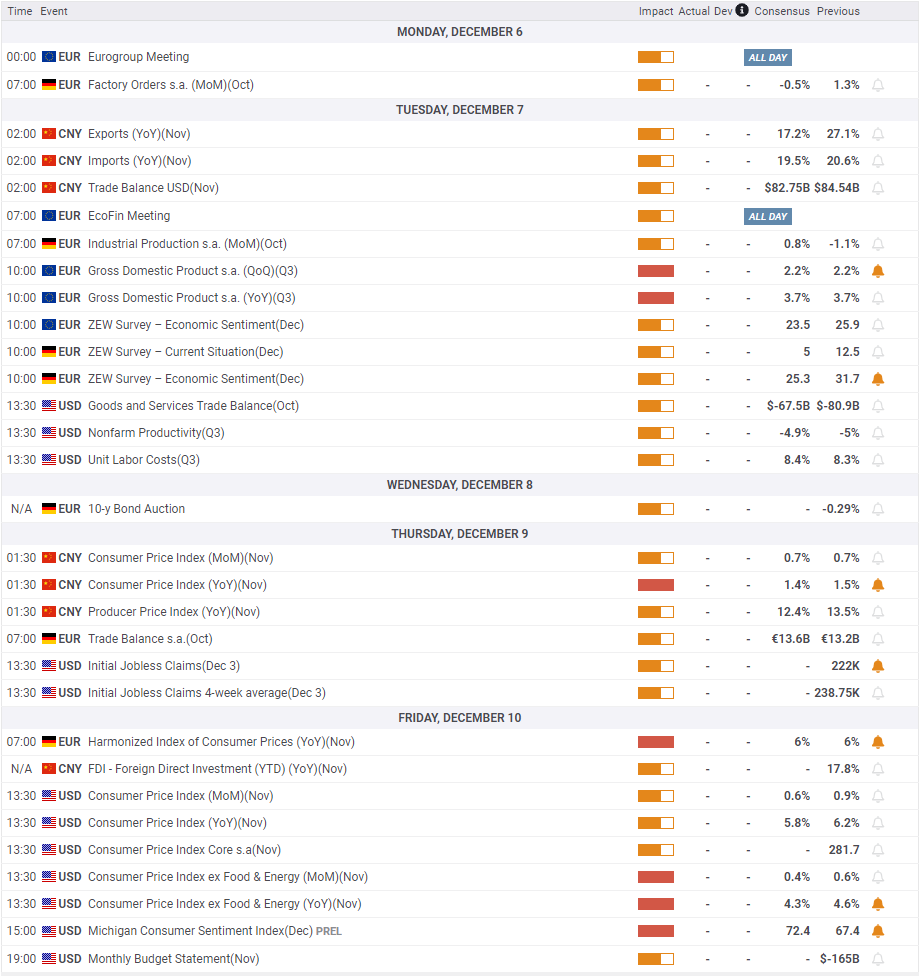 Gold failed to close above the 100-day and the 200-day SMAs twice this week despite rising above those levels, suggesting that sellers remain in play as long as these resistances stay intact. Additionally, the Relative Strength Index (RSI) indicator on the daily chart stays near 40, confirming the view that XAU/USD is struggling to gather recovery momentum.

On the downside, interim support seems to have formed at $1,760 (December 2 low) ahead of $1,750 (static level). A daily close below the latter could open the door for additional losses toward $1,740.

The FXStreet Sentiment Poll points to a bearish shift in the near-term but the average target of $1,770 on the one-week view suggests that losses could be limited. The on-month outlook paints a mixed picture with a 39% bullish bias against a 38% bearish bias. 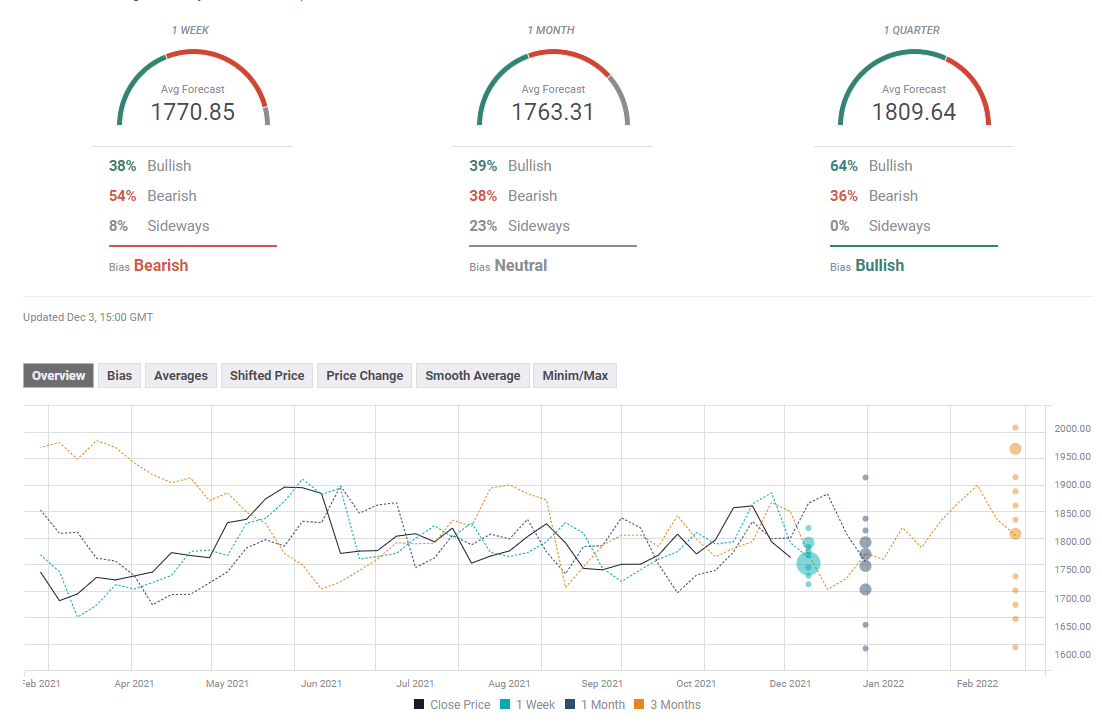