Another week and another deluge of headlines saying the US government have not agreed on a fiscal deal. The negotiations are still continuing but there has been no word of any resolution any time soon. Treasury Secretary Steven Mnuchin has stated on many occasions that a deal is needed to help the economy bounce back but conversations with House Speaker Nancy Pelosi have said to have stalled. With the elections coming up the issue will be used as a key point for voters and no doubt Trump will feel like he has to pull something out of the bag. Senate Majority Leader Mitch McConnell expressed doubts about whether Congress can get a deal on another pandemic relief package. He went on to say that talks between top administration officials and House Speaker Nancy Pelosi haven’t been fruitful, and that any embrace of bipartisanship in the Capitol has “descended” as the fall elections near.

There has been lots of central bank talk this week. The majority of Fed speakers have sounded the need for the government fiscal deal but there has been confirmation that the FOMC are willing to let inflation hit as high as 2.5%. The Bank of England speakers this week have announced they would be willing to add to QE. BoE's Saunders stated QE clearly option for further stimulus, certain scope to expand QE. Next week is the ECB meeting and the stong EUR could be mentioned but the economic projections could be a highlight. Lastly, the market will be interested to find out if the ECB are willing to look at more stimulus. Having said that recently more stimulus has been met with currency appreciation and the ECB will certainly want to avoid that.

Leading into next week the gold market has been moving sideways. The black trendline had broken to the upside but there was a clear lack of momentum after the break. Now the trendline has been retested and this is often the case. The main levels to watch are the orange support and the red resistance zone. A break of the orange support level could lead to the consolidation low being tested. On the upside, a break of the blue horizontal line near USD 2K per troy ounce could indicate the highs might once again be challenged. The long term trend is still firmly up and this consolidation could just be a small blip in an otherwise great trend.

Looking ahead to next week the main highlight is the ECB rate decision on Thursday. Although they are not expected to change interest rates, economic projections and forward guidance will be in focus. The Bank of Canada are also due to have their latest rate decision and monetary policy updates. Data in Canada has improved but there could be a dovish bias from the central bank.

On Tuesday the latest GDP figures from Japan and the eurozone will be released (Japan overnight). This will provide the market with enough to keep busy leading into the ECB meeting. The analyst consensus is for EU GDP to remain at -12.5% for Q2 but the regional breakdown will be interesting. 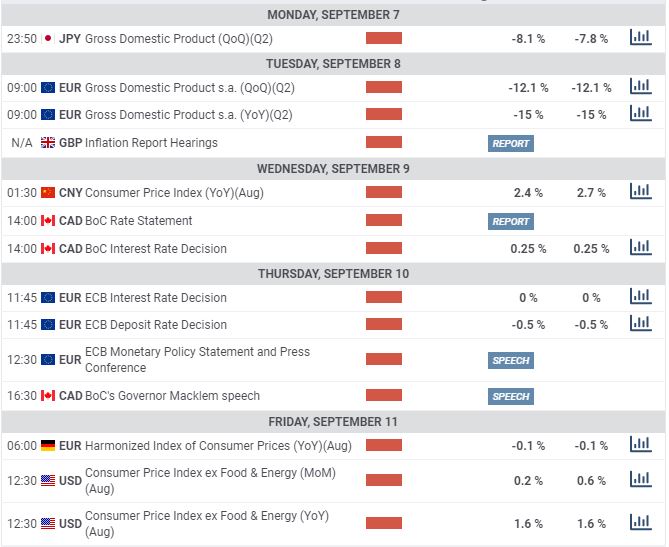 The current price of gold is around USD 1,929.77 per troy ounce. This means that over the next week and month traders are looking for the price to fall. Over the quarter, however, the poll participants think the price could hit USD 1944.31 per ounce. Considering the strength in the uptrend this seems very conservative but only time will tell.

Links to other gold articles

Gold: A break above 1961 is a short term buy signal