As stated several times in our recent videos, gold triggers the attention despite its consolidation due to the formation of a triangle since the beginning of August. After the record flows during 2020 that boosted Gold and most of the commodity and commodity related assets to record highs, the precious metal has entered a ranging market in the past 4 weeks.

Despite the correction in August the longterm sentiment remains strong with big banks forecasting that due to Gold’s relation with inflation, it could reach $3,000 within 2021. More precisely Bank of America forecasted that:

gold will reach $3,000 an ounce over the next 18 months, driven up by declines in real (inflation-adjusted) interest rates and dollar weakness as a result of the severe disruption to the US economy caused by the pandemic. The rally [so far] has mostly been driven by investor buying. And we see that [trend] continuing over the course of the next six to 12 months

The expectation for rising positive bias for the precious metal was  strengthened in August after the FOMC announced, a shift in its monetary policy strategy toward an average inflation goal, allowing prices to run “moderately” above 2% for some time to make up for periods of undershoots. This announcement in regards to higher inflation and full use of a range of tools to support the economy increases the odds that central banks will follow the Fed’s approach. This is something that was also seen  from the ECB last week, when ECB President Lagarde clearly played down the importance of the negative HICP rate for August, and suggested that despite this deflationary pressures have actually receded somewhat compared to June. This suggests that central bankers do not really care about inflation risks at the moment and are still committed to the very expansionary monetary policy and the PEPP program.

Traditionally, Gold is often hailed as a hedge against inflation – increasing in value as the purchasing power of the USD declines. Decreasing yields indicates an expectation of weak economy, which in turn causes inflation to fall, and so gold is used as a hedge against it. Hence lower real interest rates remaining low while government deficits expand ($20tn worth of stimulus globally so far) would lower the opportunity cost of holding gold, as buying bonds does not remain attractive.

As such, this week’s agenda is crucial for gold’s outlook, as the FOMC, BoJ, and BoE meeting are in the spotlight. For the FOMC, attention will be on the SEP – Summary of Economic Projections – where we will look for significant revisions to the growth and inflation estimates made in June, while the dot plot should underscore an unchanged rate posture for several years ahead. 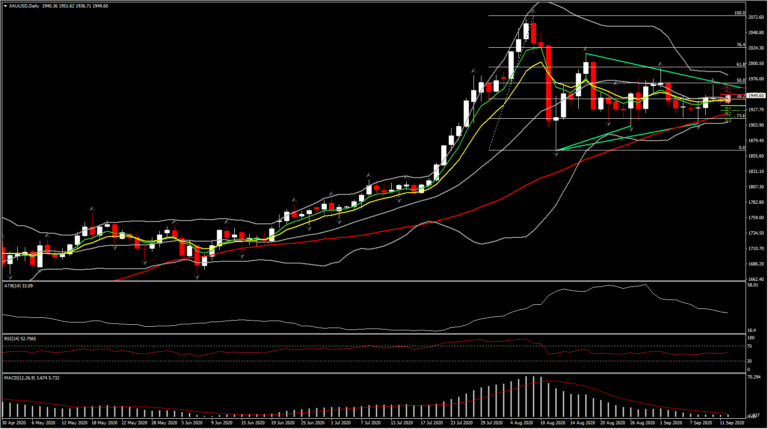 What we now see, as stated earlier, is a triangle formation with Gold unable to exit the $1900-$2015 range. However as the triangle looks set to reach  its completion, Gold’s sideways move could be set to end as well. Hence any clear breakout of the triangle is in the spotlight as it would provide the medium term direction for gold.  Anything lower than the key $1920 (lower triangle line and 50-DMA) is finding support at $1900. Anything above $1970 which is a 50% Fibonacci retracement from record highs could suggest that bulls are reconstructed again.

Meanwhile the momentum indicators are reflecting a neutral-to-positive medium & long term risk and  clear indecision in the short-term risk as the intraday RSI and MACD lines continue to hang around neutral zone, while the daily and weekly indicators hold positive