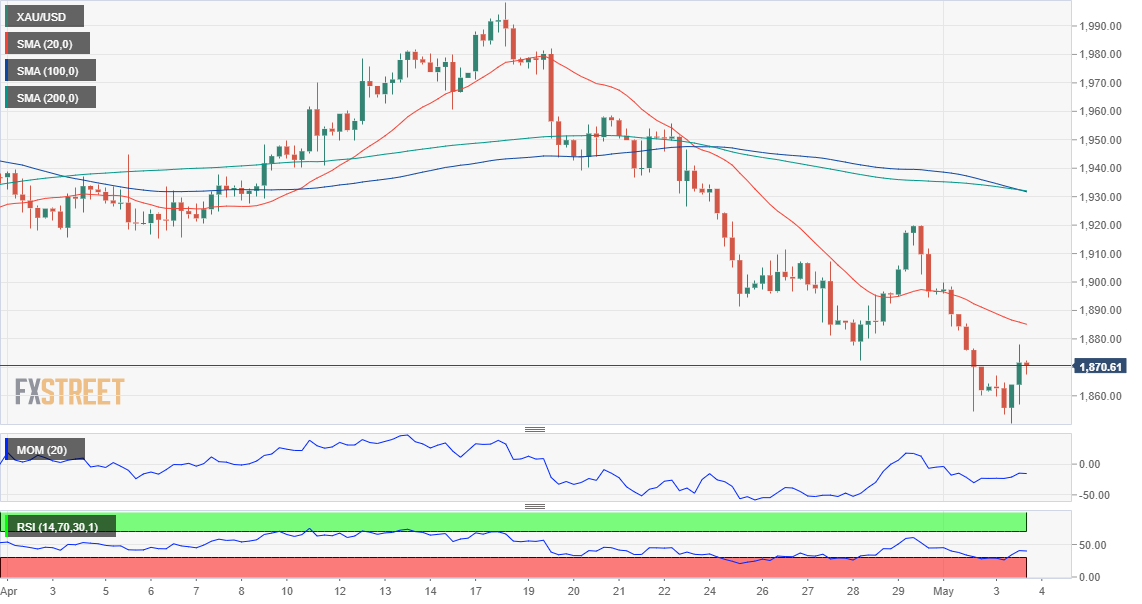 Spot gold trades with modest gains at around $1,871.40 a troy ounce after bottoming at $1,850.34 during Asian trading hours. Fears paused on Tuesday as investors changed their focus from the usual risk factors to the upcoming US Federal Reserve monetary policy decision. Global stocks are in better shape, with most indexes posting gains, while US government bond yields retreated from their Monday peaks, reflecting decreasing demand for safe-haven assets.

Aggressive central banks have been in the eye of the storm amid overheating inflation, the latter a result of ultra-accommodative stances taken by major central banks coupled with fiscal stimulus provided by governments to boost economic activity during the pandemic. The US Fed has widely anticipated an aggressive 50 bps rate hike while hinting at reducing its balance sheet. Draining liquidity is the main message from policymakers, leading to a sharp decrease in high-yielding assets in the last few months.

Ahead of the announcement, most of its potential outcome has been priced in, and the market could well fall into a “buy the rumor, sell the fact” scheme. At the time being, the greenback retains a good chunk of its latest gains, barely correcting lower against its major rivals.

Gold Price retains its bearish stance in its daily chart, as technical indicators have barely lost their bearish strength, holding near oversold readings. Furthermore, the bright metal met intraday sellers around a flat 100 SMA, providing dynamic resistance around $1,878.10. The 20 SMA, in the meantime, accelerates south far above the longer ones.

In the near term, and according to the 4-hour chart, the risk is also skewed to the downside. The intraday rally stalled below a bearish 20 SMA, which keeps heading lower below, also bearish, the longer ones. At the same time, technical indicators remain well into negative levels, with the Momentum heading south and the RSI stable at around 40.

View Live Chart for the XAU/USD

The data published by the US Bureau of Labor Statistics showed on Wednesday that the annual CPI inflation declined to 8.5% in July from 9.1% in June. With this print falling short of the market expectation of 8.7%, the dollar came under heavy selling pressure.

EUR/USD has gathered bullish momentum and advanced beyond 1.0300 in the early American session on Wednesday. The dollar came under intense selling pressure after the data from the US showed that the annual CPI inflation declined to 8.5% in July.

Gold has gathered bullish momentum and rose to a fresh monthly high above $1,800 with the initial reaction to the soft US inflation data. With the benchmark 10-year US Treasury bond yield erasing a large portion of its losses, however, XAU/USD declined toward $1,790.