American stocks jumped on Monday as investors continued to reflect on the Omicron variant and the strong US pending home sales numbers. The Dow Jones rose by more than 250 points while the Nasdaq index rose by more than 290 points. At the same time, the CBOE volatility index declined by more than 21%. This is a signal that investors believe that the new variant will not have a major impact on the economy. Meanwhile, Twitter shares jumped by more than 5% after Jack Dorsey stepped down. Other top laggards were companies like Peloton, Robinhood, and Teladoc. Aviation stocks like United Airlines and American Airlines also jumped.

The US dollar index rose as the market reflected on testimony by Jerome Powell and Janet Yellen. In a statement, Powell reiterated that the American economy was doing quite well. This is evidenced by the recent stream of strong numbers from the country. The unemployment rate has dropped to 4.6% while the initial jobless claims have dropped to the lowest level in more than 50 years. On Monday, data showed that the country’s pending home sales rebounded by 7% in October. Later today, the currency will react to the latest US home price index and consumer confidence data.

The euro was little changed against the US dollar as the market reflected on the strong consumer inflation numbers from Europe. On Monday, data by the German statistics agency revealed that the country’s inflation jumped by 6% in October. The same trend has been seen in other countries even as the European Central Bank (ECB) insisted that it is transitory. The currency will today react to preliminary inflation data from the Eurozone and France. Germany will also publish the latest unemployment numbers.

The EURUSD pair retreated slightly during the American and Asian sessions. The pair is trading at 1.1268, which is slightly below last Friday’s high of 1.1335. On the four-hour chart, the pair is still slightly below the 23.6% Fibonacci retracement level. It has also moved to the 25-day moving average while the Relative Strength Index (RSI) has moved below the oversold level. The pair will likely resume the bullish trend as the market target the Friday high at 1.1335. 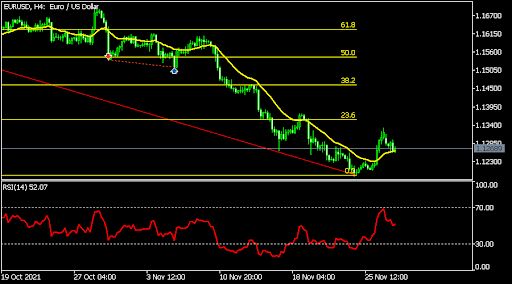 The XAUUSD pair retreated as the US dollar strength continued. On the four-hour chart, the pair is trading slightly above the key support level at 1,778. This was the lowest level on November 9th. It has moved below the 25-day moving average. Also, it has declined to the 61.8% Fibonacci retracement level. The Stochastic oscillator has also dropped from the overbought level. Therefore, the pair will likely break out lower in the coming days. 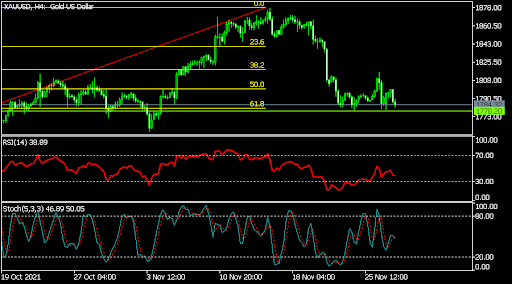 The NZDUSD pair tumbled to 0.6786, the lowest level since November 2020. On the daily chart, the pair has moved below the key support level at 0.6870. This was the lowest level in September this year. It has also fallen below the 25-day moving average and the Parabolic SAR indicator while the MACD has fallen below the neutral level. Therefore, the path of the least resistance for the pair is to the downside. 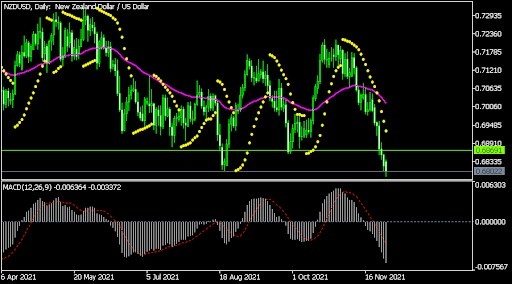