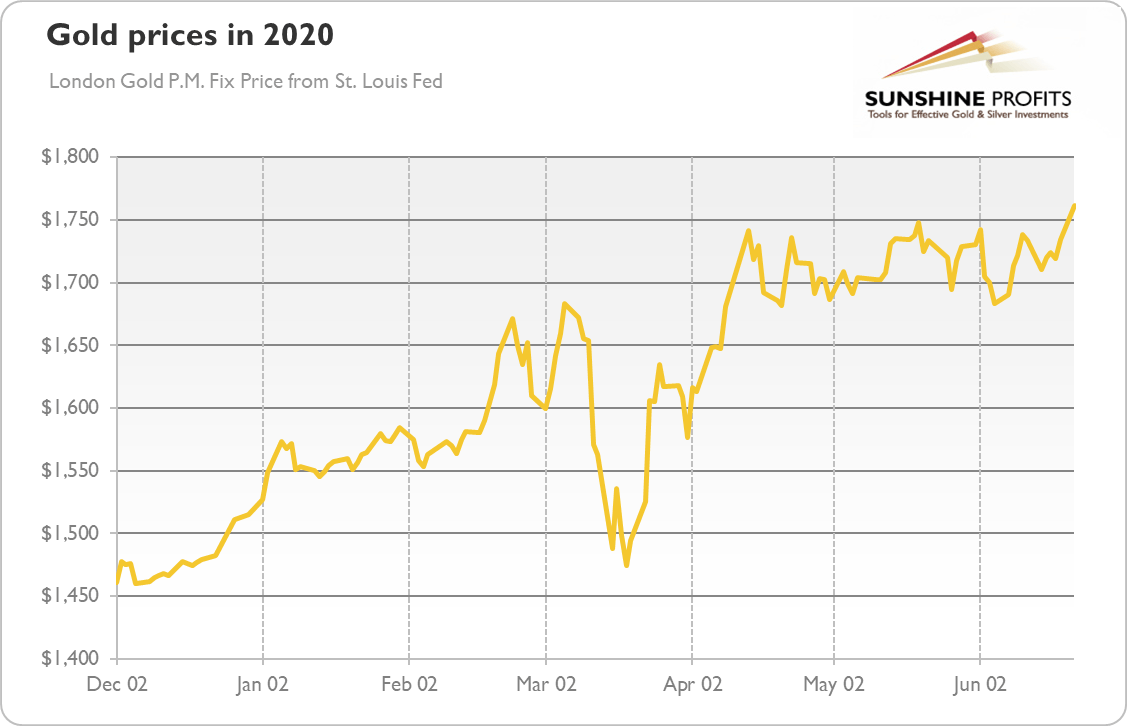 The beginning of the year was, as usual, positive for the gold prices. However, gold did not rally in January as it did in just like in the previous years. Instead, it shot up in February amid mounting worries about the COVID-19 pandemic. After a short correction at the end of the month, probably due to the initial stock market crash, the price of gold jumped to $1,684 at the beginning of March, in the aftermath of the emergency FOMC meeting, when the Fed cut the federal funds rate by 50 basis points.

Then, when the most acute part of the global stock market happened and investors were selling everything to raise cash, the price of gold plunged below $1,500, bottoming out on March 19. But the rapid spread of the coronavirus, radically accommodative response of the Fed (including slashing interest rates to almost zero) and the implementation of economic lockdowns pushed gold prices to above $1,740 in mid-April (for the first time since late 2012). There was a sideways trend in the gold market with a yellow metal trading between $1,680 and $1,750 until the end of June, when the price of gold jumped above the ceiling.

How can we judge the gold’s performance during the first half of the year and the global epidemic in particular? Well, on the one hand, gold bulls might be a bit disappointed. After all, one could expect that the most impactful pandemic since the Spanish flu of 1918, together with the unprecedented stock market crash, the deepest recession since the Great Depression, and the reintroduction of the ZIRP and quantitative easing would push gold prices much higher. The gain of 16 percent is great, but in the first half of 2016 gold gained even more.

On the other hand, gold performed much better than many other assets. Although its price declined in March, the drop was relatively mild compared to the stock market crash (see the chart below) or the collapse in oil prices. Gold is actually one of the biggest beneficiary of the coronavirus crisis, confirming its role as a safe-haven asset and portfolio diversifier. 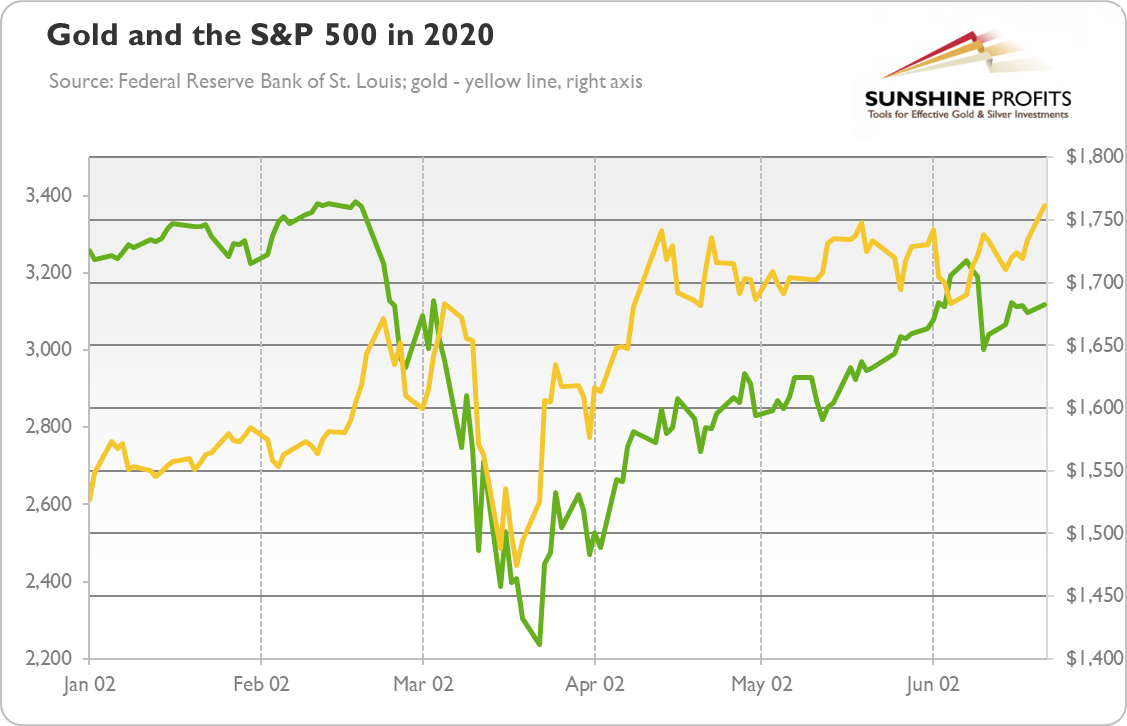 We have to also remember about three important features of the recent crisis, which limited gains in the gold market. First, there was a fire sale to get cash – and during panic no assets are really safe. In the aftermath of the Lehman Brothers’ bankruptcy, the price of gold also declined initially. Moreover, in March 2020, the U.S. dollar appreciated significantly, which put downward pressure on the gold prices, as the chart below shows. 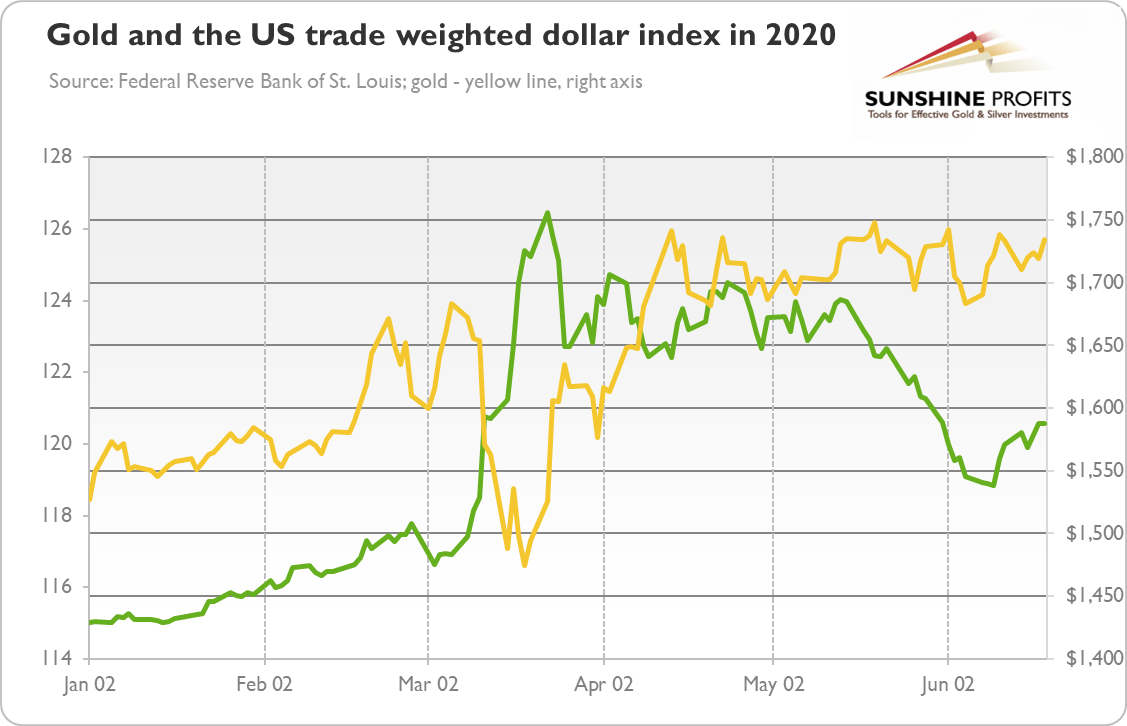 Second, the coronavirus recession was very deep, but also very short. It means that investors started quickly to expect a bottom and the following rebound, which weakened the safe-haven demand for gold. In other words, the coronavirus crisis was more like a natural disaster rather than financial crisis or recession triggered by fundamental factors (although the global economy slowed down even before the pandemic and the U.S. repo crisis showed that the American financial system is quite fragile).

Third, the Fed’s response was quick and very aggressive, much more radical than in the aftermath of the Great Recession. The U.S. central bank’s decisive actions and implementation of many liquidity measures and unconventional monetary policies (as well as Treasury and Congress’ actions) managed to quickly restore confidence in the marketplace, spurring the appetite for risky assets rather than safe havens.

OK. But what’s next for the gold market? Well, the key to this question might lie in the chart below. As one can see, there has been a strong negative correlation between the gold prices and real interest rates. In March, the panic was so great that investors were selling even Treasuries, which pushed the bond yields higher, and send the price of the yellow metal down. 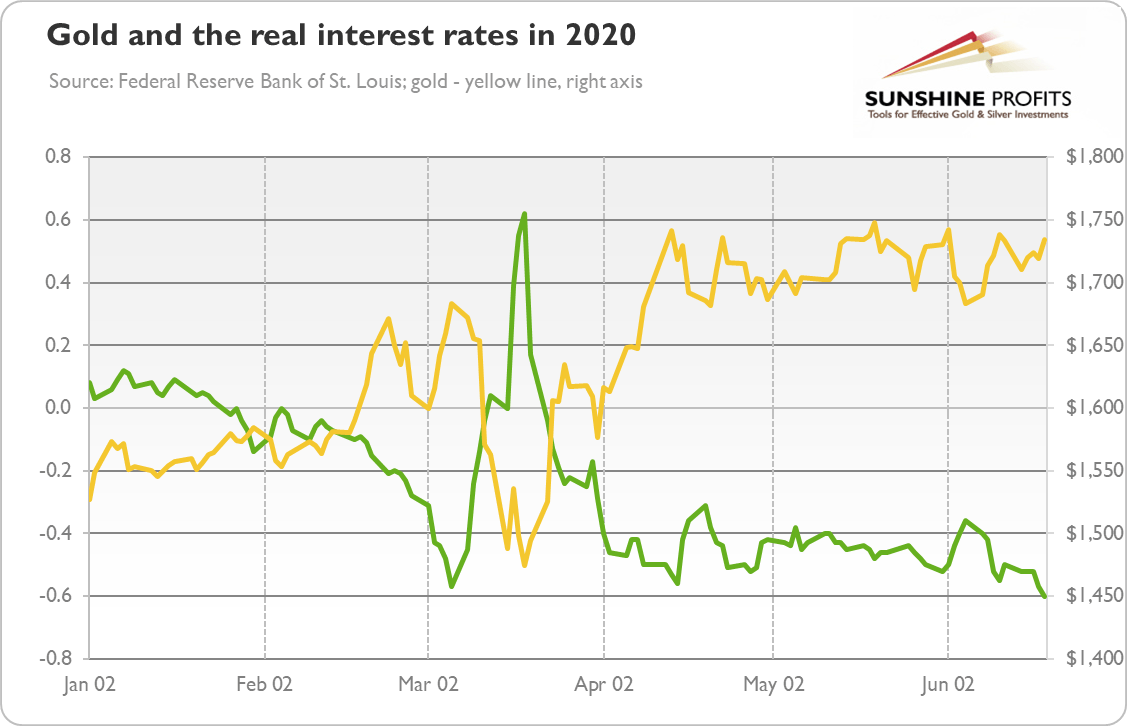 Now, the real interest rates are at very low, negative level, which should support the gold prices. The record low was -0.87 percent, so there is still some potential for going negative, especially given the ultra dovish Fed’s monetary policy.

However, with yieldsat such low level, there might be limited room for further downward move. So, unless we see a high inflation (or a significant second wave of coronavirus infections, or a softening of the greenback, for example, because of the sovereign debt crisis), we won’t expect a significant rally in gold prices (or there might be ups and downs on the way). Actually, if the real interest rates rebound somewhat, the yellow metal may struggle.