GBPJPY is set for a bullish breakout after finding significant support near the lower line of a symmetrical triangle and the 20-day simple moving average (SMA).

The pair also managed to step on the surface of the Ichimoku cloud and return slightly above the 50% Fibonacci of the 147.94-124.00 downleg, increasing optimism that the bulls may not give up yet.

A similar view is reflected among the momentum indicators too. The RSI is making higher highs and higher lows in the bullish area and has still some room for improvement before jumping into the overbought zone. The Stochastics, below their 80 overbought mark, are changing direction north again, while the MACD seems to be regaining strength above its red signal line.

Hence, the short-term risk is tilted to the upside and it remains to be seen whether the descending trendline, which is currently touching the 200-day SMA around 137.40, shows sympathy to the bulls. In such a case, the price could head for the 61.8% Fibonacci of 138.80. Breaching that barrier, the rally may take a breather near the 140.85 former support area before accelerating towards the 143.30 restrictive region. Higher, February’s peak of 144.94 may next appear on the radar.

In the negative scenario, where the pair dips below the triangle and the 20- and 50-day SMAs, the 38.2% Fibonacci of 133.15 could immediately provide base. If not, sellers would target the previous low of 131,74, a break of which would scrap the upward pattern and push the price towards the 23.6% Fibonacci of 129.65. Beneath the latter, traders could look for support around 128.00.

Summarizing, GBPJPY aims for additional gains in the short-term. However, any potential upside correction could prove to be more sustainable above the triangle. 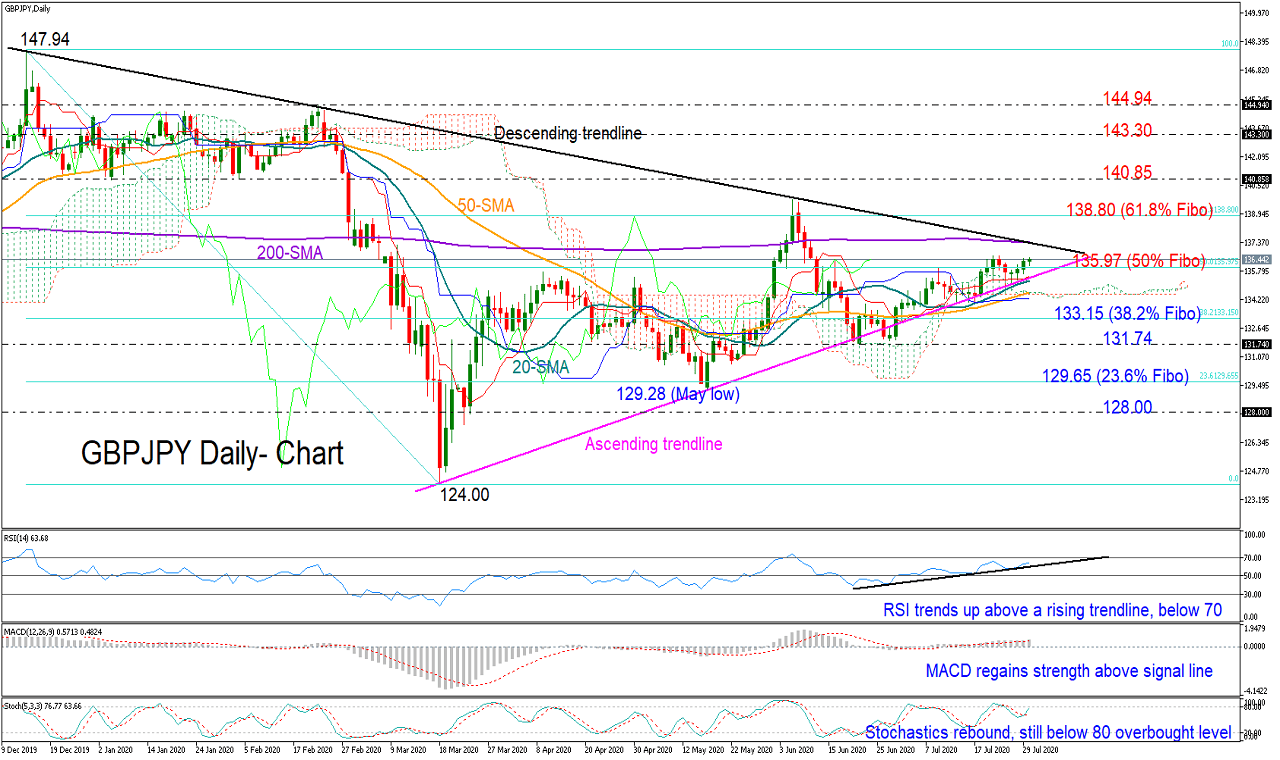 AUD/USD flirts with highs near 0.7370 on RBA's status-quo

EUR/USD jumps back above 1.1950 amid upbeat market mood

The bid tone around the euro strengthened on Tuesday, pushing EUR/USD higher above 1.1950, as stock markets gained, weakening safe-havens such as the greenback. Coronavirus vaccine optimism and buoyant equity markets weigh over the dollar. Fed's Powell says the US economy remains in a damaged state.