GBPJPY is in a strong recovery away from October 09 low, however currently unfolding a sideways correction within an uptrend, which can be a triangle in the making. Once five needed sub-waves fully show up in a fourth wave triangle, that is when a new leg higher as wave five may follow. That said, a break above the upper triangle line would confirm more upside.

A Triangle is a common 5-wave pattern labeled A-B-C-D-E that moves counter-trend and is corrective in nature. Triangles move within two channel lines drawn from waves A to C, and from waves B to D. A Triangle is either contracting or expanding depending on whether the channel lines are converging or expanding. Triangles are overlapping five wave affairs that subdivide 3-3-3-3-3.

Triangles can occur in wave 4, wave B, wave X position or in some very rare cases also in wave Y of a combination. 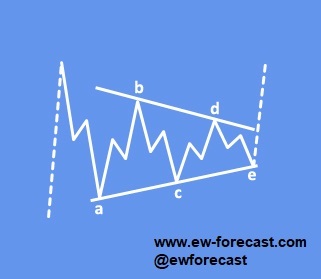