A rate hike in the UK? Speculation has been pushing the pound higher, and the topic will likely remain a major market mover for sterling ahead of Halloween. US growth figures stand out in a packed US economic calendar.

This week in GBP/USD: Speculating on rates

Rate hike speculation 1: The pound received an early boost from Bank of England Governor Andrew Bailey, who said he is ready to act against rising inflation. His tone contrasted that of other central bankers that have mostly stuck with the narrative that increasing prices are only "transitory".

While energy prices have continued their upswing, official Consumer Price Index figures for September missed estimates with 3.1% YoY compared with 3.2% projected. The news halted cable's rally but did not reverse its gains.

Rate hike speculation 2: The Federal Reserve is also moving toward raising rates – but that is likely only in the summer of 2022, according to bond markets. Christopher Waller, a Governor at the Fed, upped the ante by saying he would bring forward increases to borrowing costs if inflation remains high. Nevertheless, neither his words – nor the bank's Beige book, nor rising Treasury yields, could support the greenback.

Risk-on: Markets have had several reasons to be cheerful, and the upbeat mood diminished demand for the safe-haven dollar. First, company earnings – especially from Netflix – propped stocks...

Secondly, analysts in Asia seem to have concluded that China's regulatory crackdown is past its peak. Evergrande, the country's second-largest property developer, is still struggling to pay its debts but fears of contagion to other sectors have waned.

Covid comeback: Jumping back to Britain, coronavirus has unfortunately returned to center-stage. Cases, hospitalizations and also deaths are on the rise, raising fears of new lockdowns. While Health Minister Sajid Javid said there is no intention to enact the government's "Plan B" – returning to pre-"Freedom Day" restrictions – the topic is on traders' minds. An official denial causes worries. 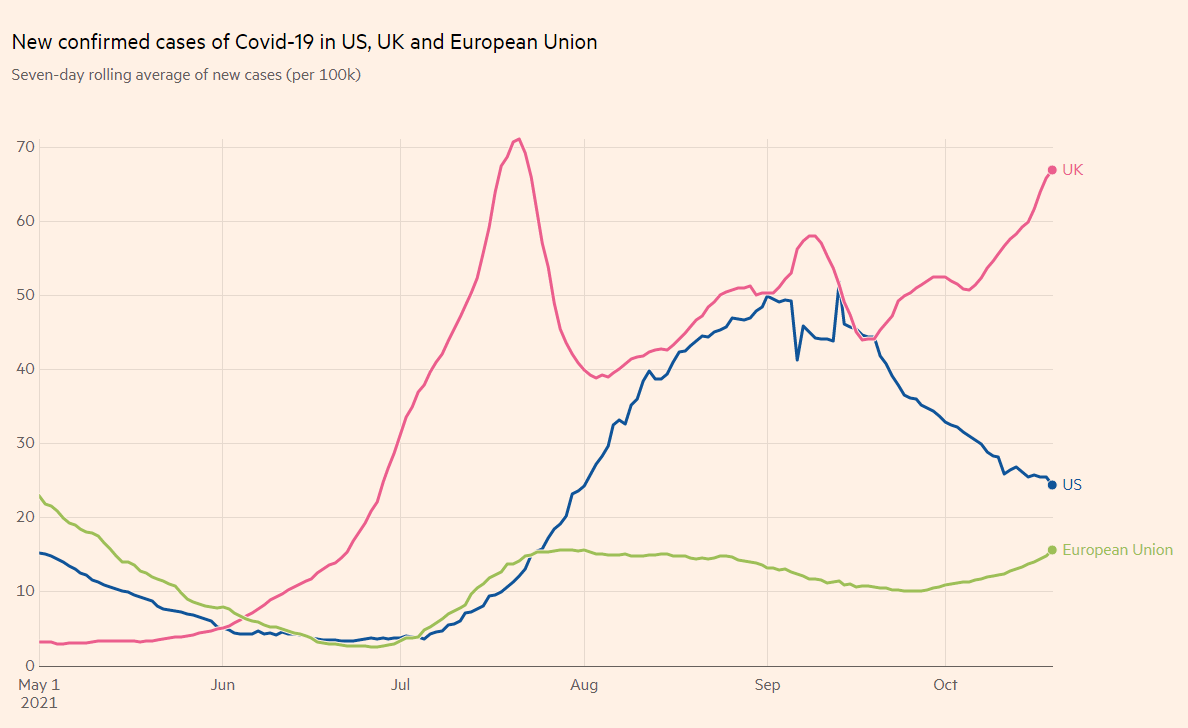 Will the BOE raise rates in November? At the time of writing, bond markets give this eventuality an 82% chance, but these probabilities are shifting rapidly. However, a speech by the bank's Silvana Tenreyro could tilt the scales at the last moment. Tenreyro is in the dovish camp, and if she shows openness to acting against inflation, sterling could shine. If she sticks to her previous stance, the pound will suffer.

Current changes of a hike:

Apart from that speech, the economic calendar features only third-tier events, leaving room for covid-related headlines to dominate. Health Secretary Javid called on the public to get their jabs, as Britain lagged behind several European peers in vaccinations.

The take-up of booster shots among the vulnerable is also of interest. Javid said it is a "blitz sprint."Hospitalization levels are critical – as keeping the National Health Service (NHS) running is the most crucial factor in imposing restrictions.

US events: GDP, Durables and a possible deal

How did the US economy do in the third quarter? The first release of Gross Domestic Product (GDP) data always has the most significant impact. The economy expanded at a rapid clip of 6.7% in the second quarter due to the reopening but has since slowed down. The question is: by how much?

Apart from the headline GDP figure, investors will also look to several components such as personal consumption and investment, which will likely remain elevated. Falling inventories could cut growth substantially again, yet at the same time that could imply faster growth in the last quarter as companies move to restock once again.

The GDP release's deflator gauge serves as another measure of inflation which could also significantly impact the market focus on rising prices.

Ahead of Thursday's GDP release, Durable Goods Orders figures for September are of high interest, as their data feeds into growth calculations. The nondefense-ex-air gauge – aka "core of the core" – has the greatest impact.

Another noteworthy release is the S&P Case Shiller House Price Index, which could top 20% YoY. Fears of another real-estate bubble could prompt the Fed to raise rates even if the recovery is incomplete. That could boost the dollar.

How close are Democrats to a compromise on their spending bill? US President Joe Biden wants to travel to the climate summit in Glasgow with green achievements under his belt. While those achievements will be diminished, the big event means more pressure to cut a deal.

Agreeing on the partisan legislation between the various factions of the ruling party would also enable passing the smaller, bipartisan bill. If Congress approves both deals, it could cheer markets and weigh on the safe-haven dollar. Failure would trigger a risk-off mood. 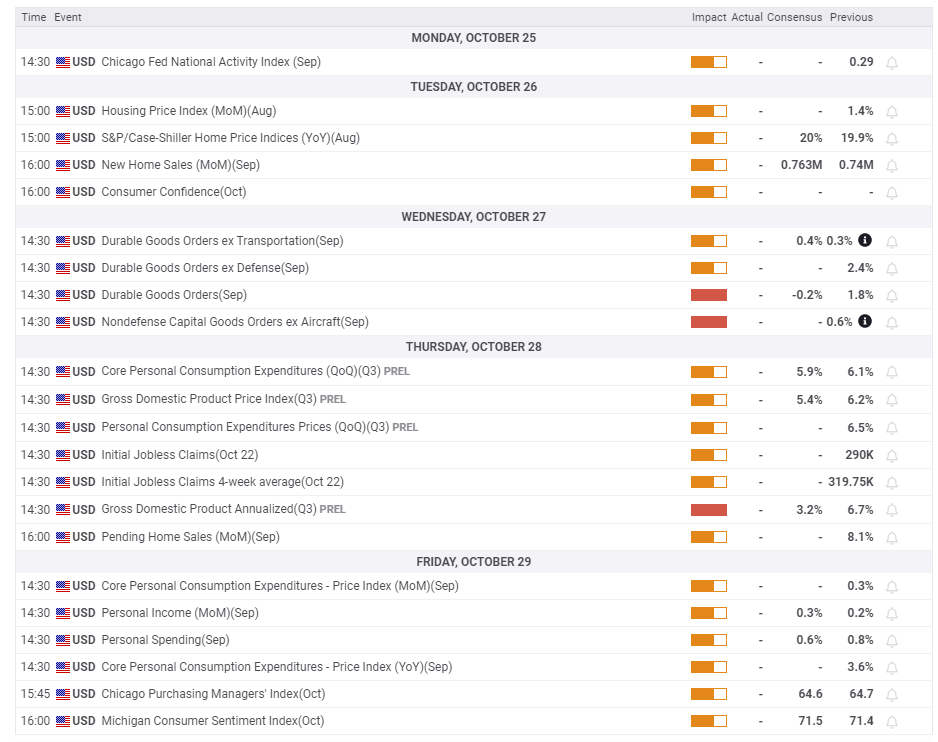 Pound/dollar has been setting higher lows and higher highs since early October – a clear uptrend. On its way up, it surpassed the 50-day Simple Moving Average, and momentum has turned positive. However, cable remains capped at the 200-day SMA and is still battling the 100-day SMA. All in all, bulls have a small advantage.

After the large rally, sterling could struggle with covid, and robust US growth could push the dollar higher. Yet overall, there is more room to the downside than to the upside.

The FXStreet Forecast Poll is showing that experts foresee limited movement in the upcoming week, perhaps cautious anticipation toward the Fed and BOE decision in the following week. Then, the poll points to declines in the medium and longer terms. It is essential to note that the average targets are little changed in comparison to the previous week. 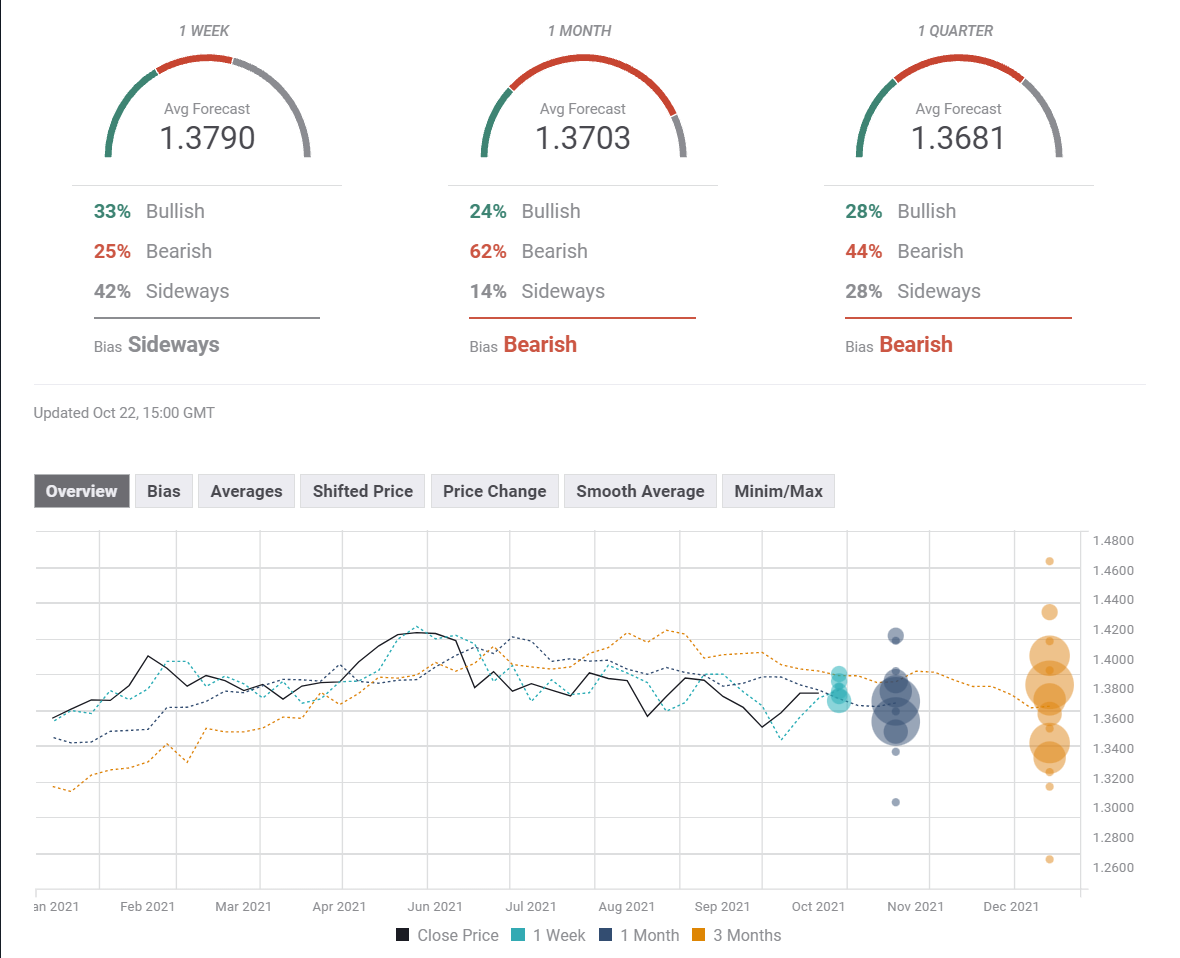 AUD/USD extends losses below 0.7000 after Australian wage price data disappointed. Softening wage growth data could lead the RBA to slow down its policy tightening. The US dollar consolidates the previous sell-off ahead of the FOMC minutes.

NZD/USD wavers around mid-0.6300s, pausing a three-day downtrend ahead of the RBNZ rate hike decision. Kiwi buyers brace for the 0.50% rate increase amid a sluggish Asian session on Wednesday. Next of relevance remains the Fed minutes.