Bitcoin has had a most optimistic month, rocketing almost 60% higher in three weeks. The US economy is beset with labor shortages, inflation, falling growth and an inability to conclude the pandemic.  Interest rates are rising as the Federal Reserve contemplates ending economic support.  Is Bitcoin's extreme optimism a better indicator of the future than the dour statistics from the US government? Join senior analysts Valeria Bednarik, Yohay Elam, Eren Sengezer and Joseph Trevisani for a look into two market visions.

Joseph Trevisani: US Treasury yields are rising, the 10-year is less than 10 points from its pandemic high of 1.746% on March 31...but the dollar is diffident...much higher than the yen but not so much elsewhere

Valeria Bednarik: Yeah, higher yields are providing support to the greenback, although we are not seeing fireworks as there were in March.

Yohay Elam: It looks like the dollar is more responsive to the broad market mood – stocks are rising, risk-on, dollar down.

Eren Sengezer: US Dollar Index advanced to a high of 93.40 when the 10-year yield hit 1.74% late March. The index is currently around mid-93s, so the dollar valuation is actually consistent.

Joseph Trevisani: Most other yields are rising also the German 10 year, UK gilt,  the Canadian 10-year is up more than the US,    which complements the movement we have seen. Canada was also helped by oil.

Eren Sengezer: In addition to rising UK gilt yields, Bank of England's hawkish outlook is also supporting the British pound against the dollar. However, I think markets are overreacting to BoE.

Yohay Elam: Indeed, with the obvious focus on US 10-year yields – the global benchmark – it's easy to lose sight of other bond markets.

Joseph Trevisani: Exactly. The US gets the headlines but the spread is what matters.

Yohay Elam: I also think markets have overreacted to the BOE – they'll probably wait to hear from the Fed, wait to see how the rise in UK covid cases impacts the economy, and maybe for more economic signs. Inflation edged lower from 3.2% to 3.1%. That took out part of sterling's sting. The BOE is sandwiched between the Fed and the Nonfarm Payrolls in a "superweek" for markets.

Joseph Trevisani: Markets have priced an announcement but a slow schedule for tapering...indeed the reductions probably won't start until next year..and I don't expect a quick exit.

Valeria Bednarik: I also think that market players are running around like headless chickens. Central bankers and facts are quite apart at the time being.  UK Inflation ticked lower, but yeah is still out of range. Same in the US, we keep hearing that "temporary" word, but facts suggest it is not only permanent but also that it will likely keep rising.

Yohay Elam: "Never believe a rumor until it is officially denied".

Joseph Trevisani: I agree.  As we have noted many times, the Fed is a very poor inflation analyst.

Joseph Trevisani: They talk their book, like everyone else...

Valeria Bednarik: If the Fed is a very poor inflation analyst, why should we care about what they think/say?

Joseph Trevisani: Good point. Markets are not free to ignore the Fed's pronouncements...even if they are wrong.

Valeria Bednarik: Well, that's it. They have the power to change the monetary policy, and that's why we should care, but the problem is we don't believe them.

Eren Sengezer: Well, they have been wrong so many times. Do you think Wall Street is a better indicator of what markets are thinking about the Fed's policy?

Joseph Trevisani: Well...different book, same talk. Here is another view.  What does the ascent of BTC this month tell us about the overall market and economy?

Eren Sengezer: That's an interesting one... Is Bitcoin actually an inflation hedge? That's what I'm curious about.

Joseph Trevisani: BTC is up 59% since the close on September 28.

Valeria Bednarik: Quite a bold statement that one. I think the crypto market is like a teenager, pure hormones at the time being. Needs a long way to mature.

Joseph Trevisani: I have two teenagers... I am going to take BTC up with them. 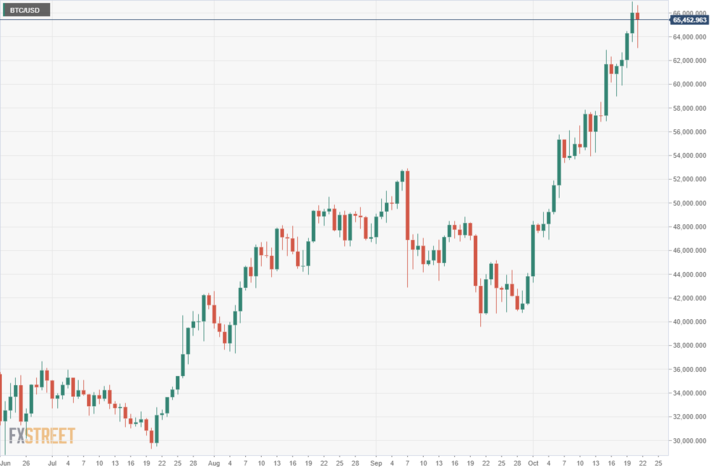 Eren Sengezer: We can go back and find times when it was up more than 200% in a month but what is the catalyst? I think the fundamental driver is more important than the actual price.

Joseph Trevisani: BTC has always traded in response to signs of acceptance.

Valeria Bednarik: And a bit as safe-haven.

Joseph Trevisani: And I think those signs, for cryptos in general, are strengthening.  The CBOE just bought a crypto exchange ErisX.

Yohay Elam: The launch of the first Bitcoin ETF has been the main driver. Tons of anticipation, then broad interest, and perhaps a second Bitcoin ETF will begin trading on Friday. I think that the heavy money entering Bitcoin is pure speculation. People are buying at a high price because they think others will buy at an even higher one. Not an inflation hedge.

Valeria Bednarik: BTC is already "accepted," other cryptos, not that much and for sure depending on signs of acceptance.

Joseph Trevisani: True, I meant for the wider markets, for commerce. There is no way to interpret a nearly 60% gain in under a month except extreme speculation.

Eren Sengezer: I don't see how such a volatile asset can be an inflation hedge at its current state but I've been reading more and more articles trying to explain how BTC has started to replace gold. Anyway, I agree it's driven by speculation.

Yohay Elam: Gold is so 2011, Bitcoin is 2021. Fashions change...at least when it comes to these articles about inflation hedges.

Joseph Trevisani: I agree, there are fashions in markets much as everything else.  Though analysts promote rationality markets are highly psychological, that certainly applies to BTC.

Yohay Elam: Yeah, analysts and academics are searching for that elusive "homos economicos" but there's only humans who make markets. Speaking of academics, such as those at the Fed, they move slowly. First, their textbooks foresaw rising inflation with rising unemployment, and when they finally accepted that globalization is a deflationary force, well, we have this – a mix of a rapid recovery and some deglobalization.

Joseph Trevisani: Sounds like the old "homo sovieticus",  human motivations are pretty constant. And the vulnerability of "just in time" manufacturing to disruption. US jobless claims were under 300,000 for the second week.

Yohay Elam: "Just in time" works amazingly. Until it doesn't. Efficiency has its limits.

Joseph Trevisani: And recovery is much harder because the pipeline is tailored for efficiency and cannot, as we are discovering, be expanded rapidly.

Eren Sengezer: Definitely... a bottleneck in a single input and the whole system comes to a halt.

Eren Sengezer: "As efficient as the least efficient component".

Yohay Elam: Yeah, LA and Long Beach are 40% of all US seaborne imports. They're working hard to process incoming goods, but yeah, the least efficient drags everything down. The question is: will these supply chain issues be 1) only an annoyance 2) raise prices, or 3) hit the economy hard?

Joseph Trevisani: I think the labor shortage if it continues, is a bigger problem.

Yohay Elam: That should result in accelerated automation, investment in productivity. Some of that is already happening, the pace matters.

Eren Sengezer: Such a structural shift in the labor force is likely to take a long time.

Joseph Trevisani: I think the labor shortage gradually ends, as folks run out of resources.  The laws of economics and consumer haven’t been suspended.

Yohay Elam: Many boomers have retired, some have accelerated their retirement due to the pandemic.

Yohay Elam: Seeing that Shiba Inu chart rise is better than many painkillers. Well, assuming no quick structural changes, is a shortage of labor good for the dollar?

Joseph Trevisani: I don’t think so. The link would be inflation but the danger to US growth is real. The Atlanta Fed has Q3 at 0.5%, down from over 6% in early August. If the US slips to negative in the third quarter, the problems are greater in the fourth.

Eren Sengezer: If it ramps up wages that could be seen as a dollar-positive development in the near term. I agree with Joseph though, a slowdown in economic activity caused by labor shortages can't be good for the dollar in the big picture.

Joseph Trevisani: Would a negative Q3 print halt any taper?

Eren Sengezer: Good question! I think so but I see a very small chance of a negative reading in Q3.

Joseph Trevisani: Probably not, but 0.5% is very close, if accurate.

Yohay Elam: The US economy is growing fast despite shortages of workers and materials. And if growth is weak, it will rebound in Q4. The impact of the Delta variant is waning.

Joseph Trevisani: I agree and the limitations of labor and materials should ease.

Eren Sengezer: Do you think Atlanta Fed's GDPNow is a good leading indicator?

Joseph Trevisani: Yes I was a bit surprised at the Atlanta Fed recent revisions down to 0.5%.

Eren Sengezer: NY Fed admitted their GDP Nowcast was pretty much useless and decided to cancel it.

Joseph Trevisani: Ha did they, I hadn't seen that. GDPNow is spotty.

Eren Sengezer: The last NY Fed GDP Nowcast was published on August 27. "The uncertainty around the pandemic and the consequent volatility in the data have posed a number of challenges to the Nowcast model. Therefore, we have decided to suspend the publication of the Nowcast while we continue to work on methodological improvements to better address these challenges."

Joseph Trevisani: I agree, 0.5% seems too low.  The pandemic has played havoc with predictions.

Yohay Elam: It's coming next week. I guess the dollar reaction will be straightforward: beat = stronger dollar, miss = weaker dollar. Or will it be a risk-on/risk-off move?

Joseph Trevisani: A low surprise in GDP will hurt the dollar, via the taper. The Atlanta Fed GDPNow designers have to be a bit nervous, 5.4% consensus vs. 0.5%.

Eren Sengezer: Maybe they will have to reassess their methodology as well.