The pound added slightly to its gains of the past four months this week which have brought it to the highest point against the US dollar in three years. The restricted closings of 1.3669 to 1.3742 means traders are not yet ready to challenge the technical impediments waiting above the current level.

The US currency has been unable to continue January's modest improvement and faces a test in the week ahead with payrolls on February 5. The UK employment picture, better than expected despite the pandemic provided the pound with some additional support in a week with little data.

In the background is the dog that didn't bark, Brexit. Despite four years of loudly predicted disaster, the departure from the EU was a discrete non-event. That fact is the pound's greatest current asset. 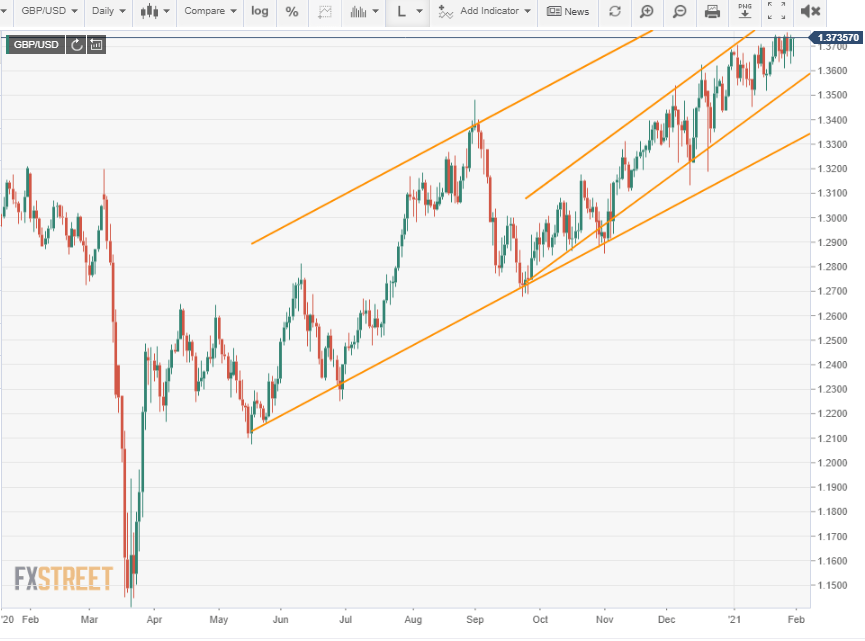 The sterling faces a considerable technical test ahead as it approaches substantial resistance at 1.3770. That level clearly defined the January to April 2018 bulge. Once crossed in mid-January's ascent it was not recrossed until the early May collapse to below 1.3600. The strength of this line probably ensures several technical attempts before success unless it is negated by a meaningful fundamental development.

The Bank of England policy vote will produce no change and though markets will look to Governor Andrew Bailey for direction he is unlikely to provide any more indication than his colleague in Washington did. The trend is higher but could be blunted if the dollar regains a stronger bid from the risk-averse trade or an improved domestic economy. 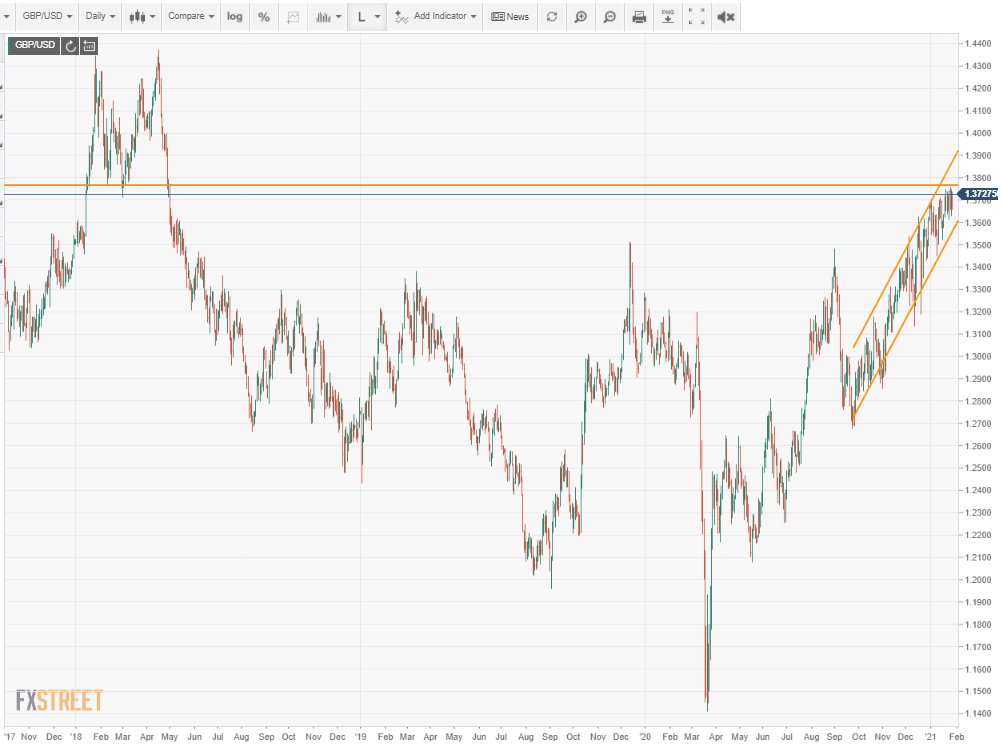 Unexpected strength in the labor market with claimants far less than forecast and good wage gains aided the sterling. 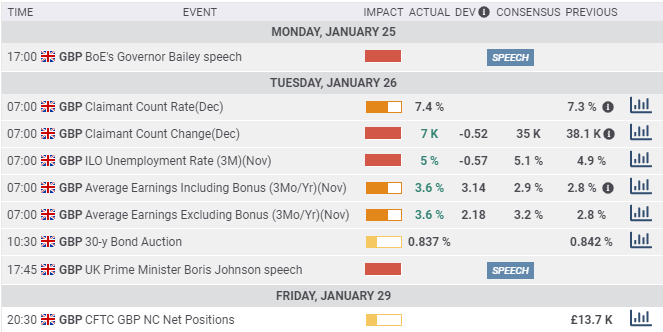 The Fed's neutral stance on US economic prospects gave the dollar no extra support while Durable Goods Orders provided notice that beneath the pandemic gloss businesses continue to prepare for the future. Fourth quarter GDP came in as expected at 4% and evoked no market reaction.

Conference Board Consumer Confidence Index rose to 89.3 in January from 87.1 in December. The Case-Schiller Home Price Index rose 9.1% in November from 8% in October. The forecast had been 8.6%.

Durable Goods Orders in December rose -0.2% on a 0.9% forecast and November's revised 1.2% increase initially 0.9%. Durable Goods Orders ex Transportation climbed 0.7% on a 0.5% estimate and November's adjusted 0.8% gain, originally 0.4%. Nondefense Capital Goods Orders rose 0.6% as expected in December. November's total was revised to 1% from 0.4%. The Federal Reserve left rates and its bond purchase program unchanged as expected. Chairman Jerome Powell was neutral about US prospects, focusing on the bank's determination to support the economy while noting several times that the best growth plan is an end to the pandemic. 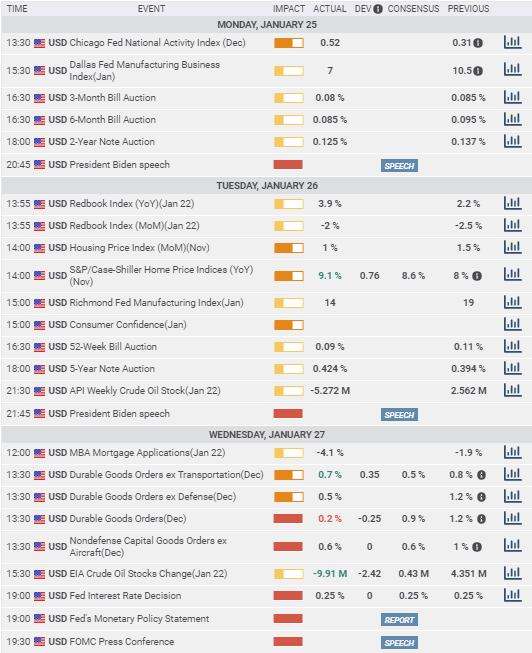 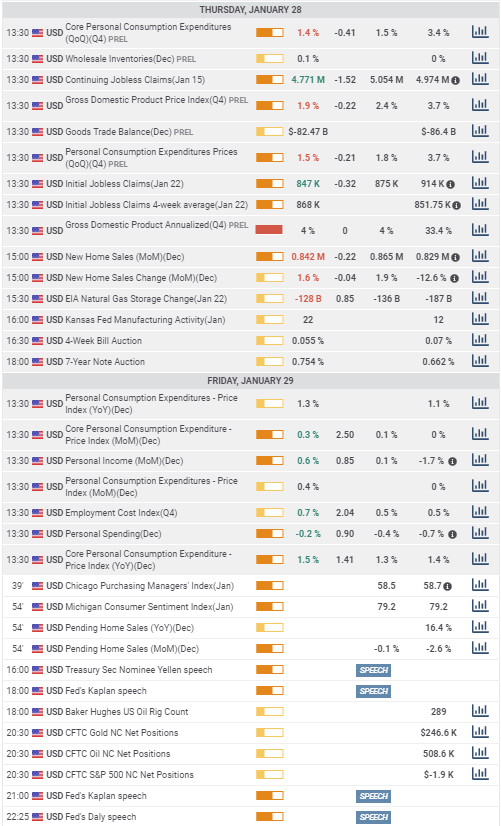 The Bank of England meeting on Thursday is the main event. No change is expected in policy but Governor Andrew Bailey's assessment of the economy and Brexit could support or weaken the pound depending on content.

Consumer Credit for December is expected to be little changed at ₤-1.5 billion following ₤-1.539 billion in November.

The Bank of England monetary policy will be stable with rates at 0.1%, the Asset Purchase Facility at ₤895 billion and the Monetary Policy committee (MPC) vote unanimous in favor at nine.

Halifax House Prices for January are due, they rose 0.2% on the month and 6% one the year in December. 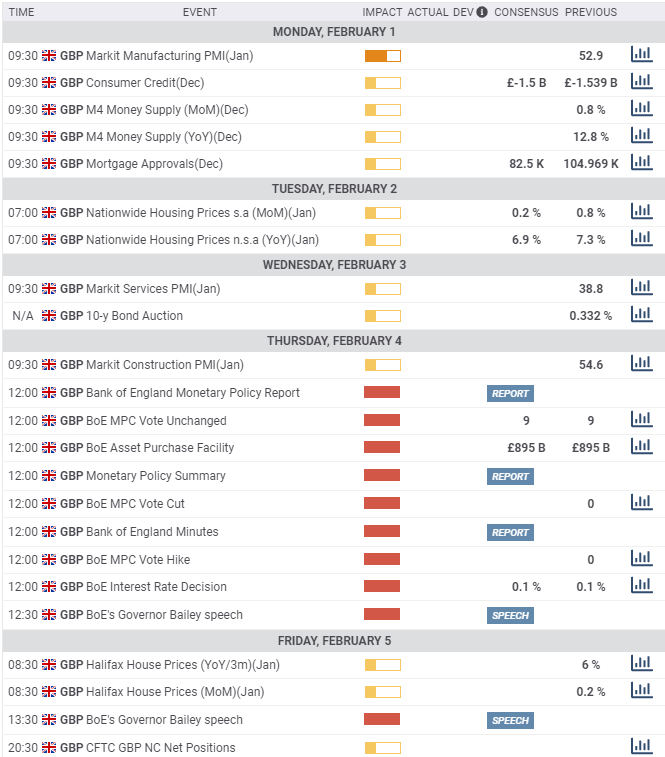 Payrolls rule the week. The over or under on the forecast translates directly to the US dollar. The PMIs will set the stage. If they are strong they wil raise expectations for the jobs report.

The Manufacturing Purchasing Managers' Index (PMI) from the Institute for Supply Management (ISM) is forecast to slip to 60 in January from 60.7 in December. The New Orders Index is projected to drop to 65.7 from 77.6. Construction Spending in December should dip to 0.7% from 0.9%.

ADP Employment Change for January is expected to add 49,000 workers after losing 123,000 in December. The Services PMI is forecast to drop to 57 in January from 57.2 in December.

Nonfarm Payrolls should add 85,000 positions in January after losing 140,000 in December. The Unemployment Rate is expected to be unchanged at 6.7%. Average Hourly Earnings are anticipated to rise 0.3% on the month and 5% on the year January after December's 0.8% and 5.1% gains. Average Weekly Hours will be unchanged at 34.7. Consumer Credit in December will expand $12.1 billion following the $15.27 billion increase in November. 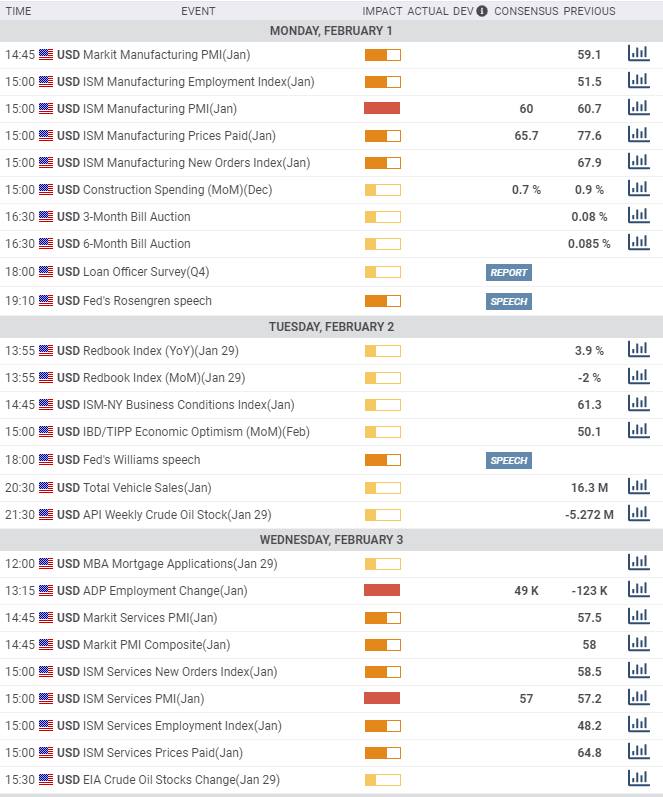 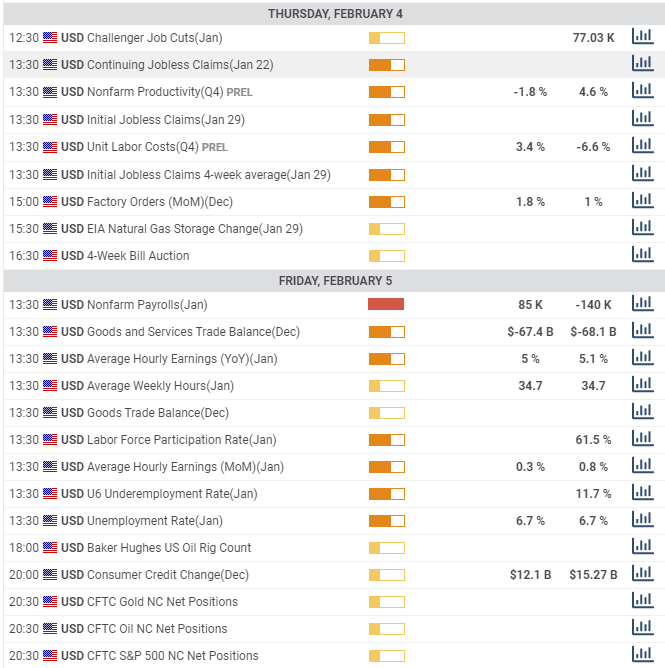 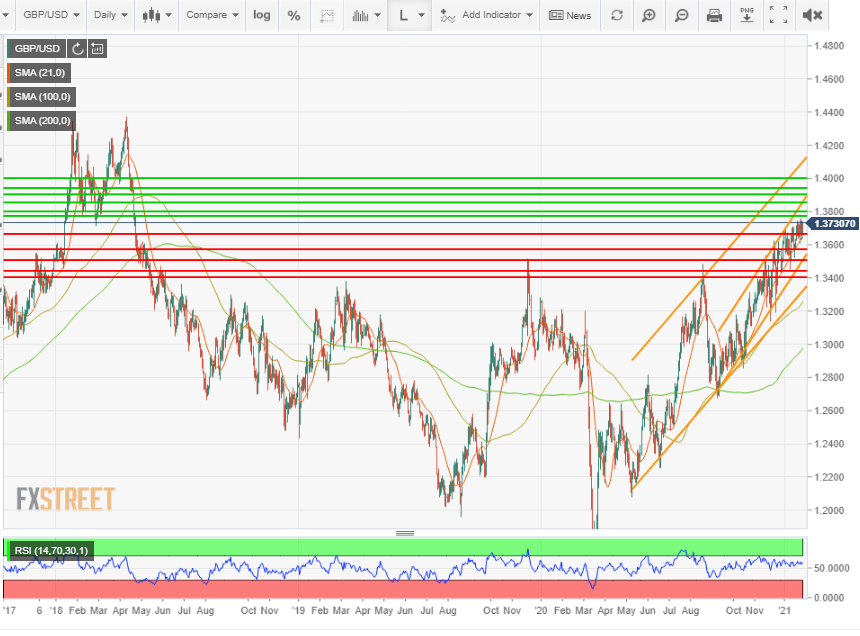 The GBP/USD has outstripped all levels back to the first half of 2018. The several closing rates over the past week around 1.3740 are references to the resistance at 1.3770 and above rather than a block of their own. The rising channels are intact and the upper border of the inner and steeper formation enters the resistance bands and is protected by them. Normally the older the resistance and support levels the weaker their impact on current trading. In the sterling's case when the steep recent ascent is combined with many lines immediately above it weakens the technical propulsion higher. It is likely that a move higher from here will need a positive fundamental or econmic development. The longer the pound lingers at these highs without penetrating the resistance band above the greater the chance of a profit-taking fall. Such would not change the trend, merely delay the test.

The FXStreet GBP/USD Forecast Poll looks to a new top within the week followed by profit taking and then a return to positive territory. The unknown factor is the state of the UK economy and the pandemic in the next quarter. The potential for improvement in growth and the pound is considerable.